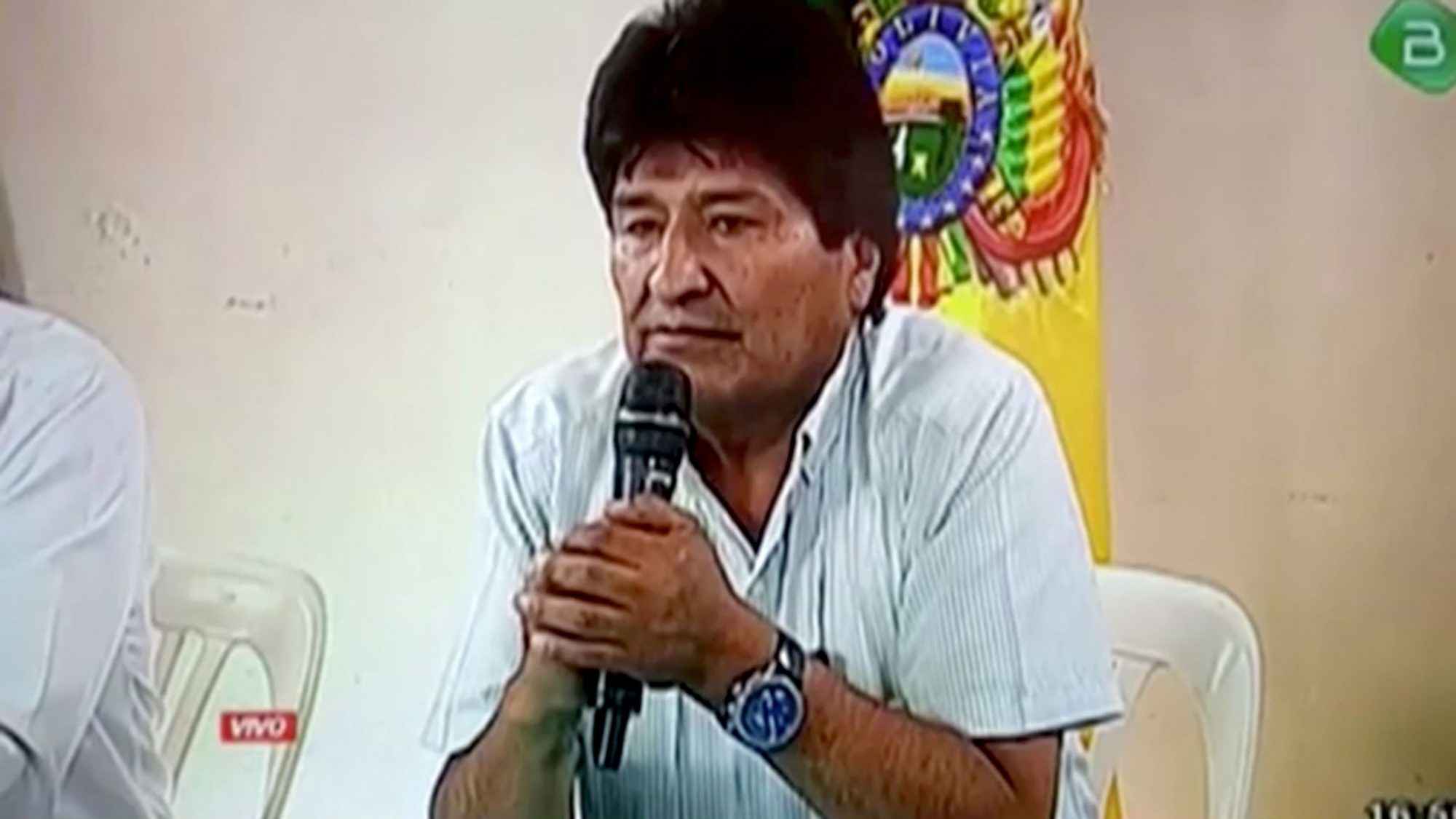 The OAS And US Help Overthrow Another Government

Above photo: Bolivian President Evo Morales at a press conference announcing his resignation.

Bolivia – The United States and the Organization of American States can add another coup to their scorecards, even if U.S. media refuses to recognize it as such. This time it was in Bolivia, where President Evo Morales was forced to step down on November 10, following weeks of pressure and extremist violence. Morales resigned under duress in order to avoid bloodshed, and emphasized that his “responsibility as an indigenous president of all Bolivians is to prevent the coup-mongers from persecuting my trade unionist brothers and sisters, abusing and kidnapping their families, burning the homes of governors, of legislators, of city councilors… to prevent them from continuing to harass and persecute my indigenous brothers and sisters and the leaders and authorities” of the MAS (Movement towards Socialism, Morales’ political party).

His resignation has yet to take effect, as it must be approved by the legislature. This did not stop opposition party member Jeanine Añez, the Senate’s second vice president, from declaring herself interim president, further proving that what’s happened is a coup. MAS legislators, who have a majority in both chambers, have been unable to attend parliamentary sessions as security forces have not guaranteed their safety.

Currently, indigenous and labor movements are on the streets in several Bolivian cities, demanding that President Morales be reinstated. Meanwhile, police forces are ripping the Wiphala flag (a flag that represents the indigenous peoples of the Andes) from their uniforms and from government buildings. Coup leader Luis Camacho entered the government palace with a Bolivian flag and a bible; upon leaving, one of his supporters, a Christian pastor, declared that “Pachamama will never return to the palace… Bolivia belongs to Christ.” (Pachamama is an Andean goddess representing Mother Earth.) The coup and its aftermath are not just a rejection of President Morales, but of Bolivia’s indigenous majority and the social gains of the last 13 years.

Morales’ resignation came hours after the head of the armed forces and the chief of Bolivia’s police “suggested” that he resign. The head of the army, General Williams Kalimán Romero, was Bolivia’s military attaché in Washington from 2013 to 2016. The chief of police, General Vladimir Calderón, was Bolivia’s police attaché in Washington until December 2018. As attachés they would have been in constant communication with the Pentagon and other agencies; it is no stretch of the imagination to wonder if they were still in contact with their U.S. counterparts as the overthrow of the Morales government unfolded.

The coup was carried out over three weeks after the October 20 elections, but it was months, if not years in the making. The United States first began targeting Evo Morales in 2001 – five years before being elected president – when the US Embassy in La Paz warned that his political base needed to be weakened. Afterwards, USAID began funding right-wing political parties and “civil society” organizations that would feature heavily in attempts to overthrow President Morales.

The first such attempt came in 2008, two years after Morales was first elected president and days after he survived a recall referendum with 67.4% of the vote. On that occasion, coup plotters in eastern Bolivia, a region rich in minerals where the white minority population is concentrated, attempted to secede from the country. According to the International Federation for Human Rights, the opposition in eastern Bolivia “promoted separatism and ethnically and socially based hatred through the Civic Committees (Comités Civicos), in particular the Pro-Santa Cruz Civic Committee.” Luis Camacho, the millionaire coup leader with ties to paramilitaries, is the current president of this committee, which has received U.S. funding in the past.

The desire to overthrow Morales has existed for years, but more immediate plans were finalized in the weeks before the election. Bolivian media outlet Erbol published leaked audio of conversations held from October 8 and 10 between civic leaders, former military officials and opposition politicians who discussed “a plan for social unrest, before and after the general elections, with the aim of preventing President Evo Morales from remaining” in office. One opposition politician mentioned being in close contact with Senators Marco Rubio, Ted Cruz and Bob Menendez.

The OAS also played an important role in stoking protests and ensuring that the coup was successful. On October 21, a day after the election, it issued a statement casting doubt on the process due to an “inexplicable” change in the trend of the vote count. This statement was thoroughly debunked by the Center for Economic and Policy Research (CEPR), which found that trend did not change and that Morales widened the gap over his rivals due to late reporting rural precincts, where he enjoys a tremendous advantage. A later statistical analysis by CEPR found that there was “no evidence that the election results were affected by irregularities or fraud.” However, the damage was done: protestors took to the streets decrying electoral fraud. These claims were echoed by the State Department and Senator Rubio on Twitter.

After being invited by President Morales to conduct an audit, the results of which he promised to respect, the OAS instead opted to destabilize the country. The full electoral audit was initially due by November 12, but on November 10, a day after Morales announced that a coup was taking place and amid political violence throughout the country, the OAS decided to issue a preliminary audit. This report, which did not include data that could be independently verified, repeated the false claims of the October 21 statement and called for new elections. In response, Morales agreed to new elections and to replacing the board of the electoral body, yet this offer was rebuffed by coup leaders.

Rather than denounce the coup and insist that Morales be allowed to finish out his term (which ends in January), the OAS held a vote that refused to call it a coup, although several countries dissented. Mexico criticized the OAS for being “surprisingly quiet” given the violation of constitutional order, while Uruguay condemned the body’s “double standard depending on antipathy or sympathy” for the government in question. Earlier in the day, Argentinian president-elect Alberto Fernández said “what happened in Bolivia is a shame, the behavior of the OAS is shameful because the audit the OAS held is significant in its flimsiness and has conclusions that are absolutely manipulated.”

It should be noted that the 2008 coup was neutralized in part because of the role played by UNASUR, the Union of South American Nations. This regional bloc has been severely debilitated in recent years as a direct result of State Department pressure and the willingness of right-wing Southern American presidents to give up on long-term regional integration plans for short-term political benefits. The decline of UNASUR and CELAC (the Community of Latin America and Caribbean States – another target of the State Department), coupled with the OAS’s bias, leaves the region with no credible multilateral organization.

This is important, because the only way forward for Bolivia is to hold new elections, which will require independent electoral observation. Given that the OAS is unfit for such a role, the region should insist that the United Nations send an electoral mission. It is the only body that can carry this role out in an impartial manner.

Bolivia is at a flash point and measures have to be taken to reduce tensions. Its legislature must be allowed to function normally, which in practical terms means that  the safety of MAS legislators and their families must be ensured. A gesture for MAS supporters would be to reinstate the president and vice president of the Senate and the president of the Chamber of Deputies (should they desire to be reinstated); all three resigned under duress during the weekend of the coup. Only then can the legislature decide whether to accept Morales’ resignation. Finally, the MAS presidential candidate, whoever that ends up being, needs to receive guarantees for their safety and assurances from the international community that a MAS victory will be respected.

Leonardo Flores is a Latin American policy expert and campaigner with CODEPINK.