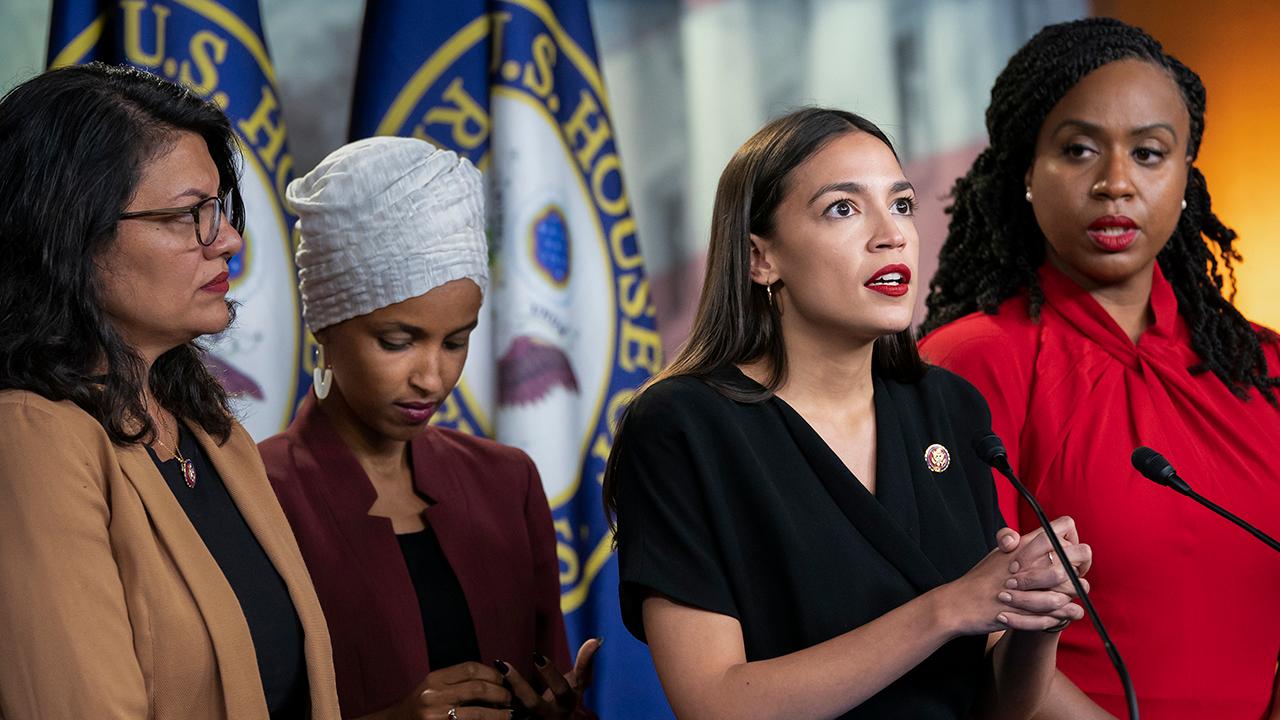 The so-called ‘progressive” model would have us wait half a dozen election cycles before taking real action on the demand for Medicare for All and a Green New Deal.

“Black Americans had grown more economically optimistic and pro-U.S. intervention than ever before by the end of Obama’s first presidential term.”

Not one member of “the Squad” withheld their vote for Pelosi or made the demand of a floor vote for Medicare for All a subject of protest during the proceedings. What was revealed in the weeks leading up to the vote, however, was the ongoing Obama-fication of “the Squad.” Jimmy Dore and other activists demanding a Medicare for All floor vote were relentlessly attacked on social media. Benjamin Dixon, Sam Seder, Nomiki Konst, and other mouthpieces of the so-called “progressive” media accused Dore of being a federal agent , an Assad apologist,  and a “grifter.” Popular left-ish journalists Krystal Ball and Kyle Kulinski agreed with the tactic on principle but maintained their loyalty to “the Squad” as a viable leftwing political force. Activists in the Democratic Socialists of America (DSA) renounced Jimmy Dore publicly but avoided the political issue of the floor vote despite the demand being a key part of their organizing strategy toward Congress.  Alexandria Ocasio-Cortez insinuated on Twitter that Dore’s brash and profanity-laden criticisms amounted to “violence” toward her.

“Dore and other activists demanding a Medicare for All floor vote were relentlessly attacked on social media.”

The backlash against #Forcethevote is indicative of a hive mentality among so-called “progressive” Democrats that is eerily reminiscent of the period of Obama’s presidential reign. Obama’s eight years in the Oval Office were a lonely time for those at Black Agenda Report and anyone else who upheld the principles of Black self-determination, socialism, and class struggle. Nearly the ENTIRE left ignored or condemned criticisms leveled against Obama. Obama was the “chosen one and his status as the “first Black president” was beyond reproach. Critics of Obama from the Left were called racists and GOP apologists. Obama’s impact on the political consciousness of the Left was so immense that Black Americans, typically the most progressive constituency on issues of economic justice and war, had grown more economically optimistic  and pro-U.S. intervention than ever before by the end of Obama’s first presidential term.

In 2016, I wrote a ten-part series on the Obama legacy and clearly delineated how the “first Black president” operated as the more effective evil of U.S. imperialism. Conditions for Black America worsened under Obama, with Black wealth placed on a collision course toward zero during his two terms. Obama refused to prosecute bankers and killer cops but found time to sip contaminated water in Flint, Michigan and call protestors “thugs” in Baltimore in the aftermath of the police murder of Freddie Gray . Furthermore, Obama’s “Grand Bargain” with the Republican Party included a non-stop regime of austerity that ballooned the war machine at a time when left critics of Obama were being marginalized and denounced at every turn. The political stagnation engendered by Obama’s sheer presence in the White House paved a smooth road for Donald Trump’s successful 2016 presidential campaign.

For many on the left, the silver lining of the emergence of Donald Trump was the growing numbers of young people in the Democratic Party who threw their support behind Bernie Sanders, Alexandria Ocasio-Cortez, and others who deemed themselves “democratic socialists.” In the last four years, the word “socialism” has become a popular term among young people  and majorities in the United States have declared firm support for policies such as Medicare for All  and a Green New Deal . Yet little was done to fight for these policies in the halls of Washington. House Speaker Nancy Pelosi dismissed the “Squad” as a pesky minority while the corporate media ran non-stop interference for the DNC’s marginalization of its “progressive” wing.

Under these political conditions, one would think that those who worked tirelessly to elect Sanders, AOC, and the rest of “the Squad” would be raising their voices and fighting even more boldly for Medicare for All and a host of other demands. The opposite has happened. Instead of protesting the DNC and challenging “the Squad” to stand up to their corporate adversaries, forces in the Democratic Socialists of America and the so-called “progressive” media have become more interested in careers and committee seats than with the needs of the masses. Their opposition to #Forcethevote revealed the bankruptcy of a model of change which relies upon electing “progressive”-sounding Democrats to bring about social transformation that only the power of the masses of people can truly achieve. This model mobilizes millions to bring an AOC into political office then tells the starving and oppressed masses to wait for another half dozen election cycles before taking real action on the demand for Medicare for All, a Green New Deal, or anything else that would alleviate their suffering.

“Nancy Pelosi dismissed the ‘Squad’  as a pesky minority.”

The failure of this model for change is clearly demonstrated in the fact that the so-called “progressive” wing of the Democratic Party has been far from it on key issues shaping the future of humanity itself. No true protest beyond tweets were leveled against the CARES Act stimulus plan which sent trillions of dollars upward to the richest banks as tens of millions were sent to unemployment lines beginning in March of 2020. On the issue of war and peace, “the Squad” has followed Bernie Sanders into the abyss of imperialist piggishness. AOC met with fascists in Bolivia  who engineered a short-lived coup in 2019, closed the door on Max Blumenthal  when asked about her stance on the U.S.’ regime change war on Venezuela, and sent a Christmas Eve message  to the CIA-backed Dalai Lama in support of “democracy” in China. Ilhan Omar voted in favor of U.S. support for NATO in 2020. Members of “the Squad” also mounted little challenge to the renewal of the Patriot Act —a clear signal that “the Squad” will play ball with the war machine whenever it is deemed convenient.

Politics is not a purity contest. It is, however, a contest for power. The failures of “the Squad” and the so-called “progressive” wing of the Democratic Party reveal the true contours of power in the United States. Capital reigns supreme, and the “left”-ish elements of the Democratic Party find it far easier to follow the Obama-model of leadership than to break from corporate captivity. “The Squad” poses as an alternative to corporate power during election cycles only to discipline their millions of supporters into accepting capitulation to the establishment once elected. As with Obama, “Squad” leaders have begun to frame all criticism of their failures as hostile to the cause of social justice itself. In other words, Democratic Party leadership must be obeyed for “the Squad” to exist.

“The ‘Squad’ has followed Bernie Sanders into the abyss of imperialist piggishness.”

This is what is meant by the “Obama-fication” of AOC and the rest of “the Squad.” Reverence for personalities only empowers the political right. During the pandemic, rightwing “populists” such as Joshua Hawley have risen to prominence by occupying political space that should be held by the left. Donald Trump rose to power off of the cognitive dissonance engendered by Obama’s disastrous policies and even gained ten million more voters in his loss to Joe Biden. A good portion of these supporters went on to invade and defile Congress at a “stop the steal” rally held on January 6th. This event gave further credence to the conclusion that anyone who calls themselves “the Left” must make a clean break from the Democratic Party that is responsible in large part for the epochal chaos of the Trump period. Only then can an actual struggle for socialism begin.

Danny Haiphong is co-coordinator of the Black Alliance for Peace Supporter Network and organizer with No Cold War. He and Roberto Sirvent are co-authors of the book entitled American Exceptionalism and American Innocence: A People’s History of Fake News–From the Revolutionary War to the War on Terror (Skyhorse Publishing). His articles are re-published widely as well as on Patreon at patreon.com/dannyhaiphong. He is also the co-host with BAR Editor Margaret Kimberley of the Youtube show BAR Presents: The Left Lens and can be reached on Twitter @spiritofho, and email at wakeupriseup1990@gmail.com.