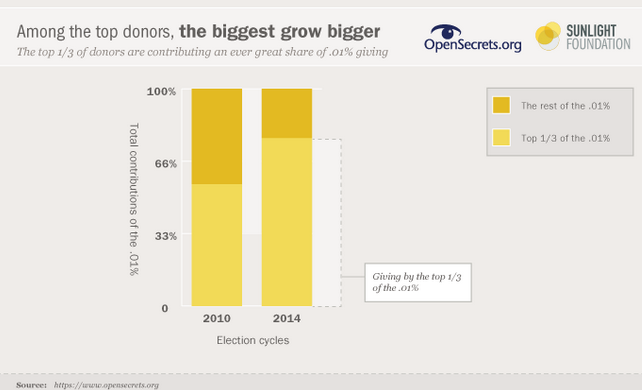 One lesson of the 2014 election cycle was that more money came from fewer people.

And a look at the political One Percent of the One Percent of Americans — the top 31,000 or so donors, roughly equal to one percent of one percent of the U.S. population — over the last three elections bears that out: The money coming from this select demographic is increasing and it is leaning more conservative. What’s more, even within the top .01 percent, the donors at the very peak are contributing more and more of the money.

The Center for Responsive Politics and the Sunlight Foundation teamed up to take a detailed look at the topmost tier of donors of disclosed political contributions at the federal level.

Among the findings: In 2014, the top .01 percent accounted for just more than $1 billion worth of donations, up from $732.7 million in the previous midterm in 2010. The 61 percent increase far exceeds the rate of inflation or the increase in the election’s total cost, meaning this top group of donors assumed a far greater role in financing the most recent election than the previous midterm. According to OpenSecrets.org data, all donors in the 2010 election gave roughly $3.48 billion, of which the top 32,000 or so paid for about 20 percent. In 2014, all donors chipped in $4.01 billion; the top One Percent of the One Percenters accounted for about 28.6 percent of that.

Even among the top .01 percent, there is a perceptible trend toward the biggest donors shouldering more and more of the cost.

Even within the top .01 percent, there is apparently an elite set of donors pulling away from the pack.

The .01 percent includes wealthy individuals from both ends of the political spectrum, but there are relatively few in between and the numbers at the extremes are growing. And more money is coming from the right.

The vast majority of donors in this demographic gave overwhelmingly, if not entirely, to one side or the other.

In 2010, there were 12,178 donors in the .01 percent who gave no money to Democratic or liberal recipients at the federal level, and a similar 12,782 who gave no money to Republican or conservative causes. In 2012, a presidential year, there were suddenly 14,672 donors who gave to no Democratic or liberal recipients, and only 10,672 who gave to no Republican or conservative ones.

By 2014, the trend toward greater partisanship had solidified, though the conservatives dominated — a full 15,147 (or almost half of the .01 percent) gave no money to Democrats or liberals, while 13,333 gave nothing to any Republicans or conservatives. There were just 174 donors among the 32,000 in 2014 who gave equally to both sides — one less than in 2010. And the biggest donor who gave to both sides in 2014 was only the 980th largest donor overall. The big money clearly lands on the extremes of the spectrum.

Overall, donations from the top donors numbering .01 percent of the population have moved from favoring Democrats and liberals to favoring Republicans and conservatives.

In 2010, 45.1 percent of donations from this set went to Democratic or liberal recipients, more than the 42.7 percent that went to Republican or conservative recipients. In 2012, the equation changed dramatically, with just 36.5 percent of the group’s money going to the left and 59.7 percent going to the right. By 2014, the .01 percent were slightly more interested in liberal recipients than they’d been in the presidential cycle, but not much — 42.7 percent of donations from these elite donors went to liberals while 46.8 percent went to conservatives, almost exactly flipped from the picture in 2010.