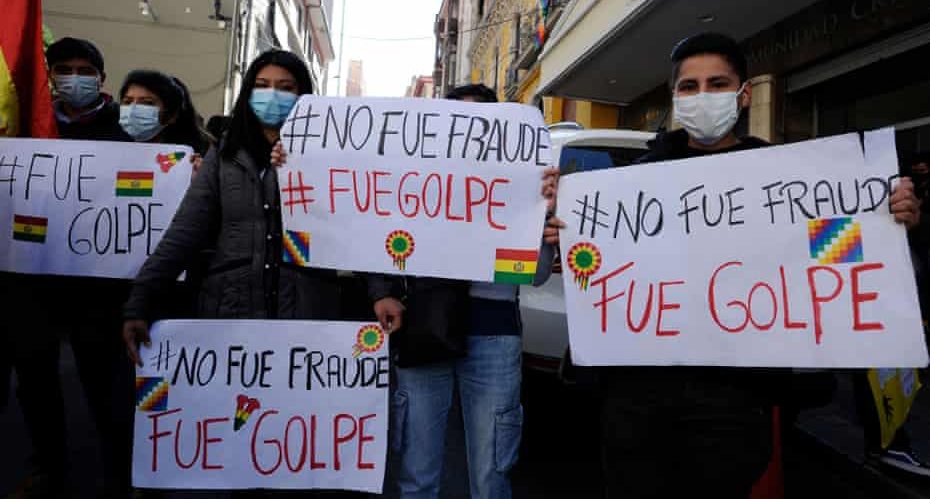 The Organization Of American States Is Not Credible

Above photo: ‘The findings were clear – and damning: while the OAS found no evidence of fraud in the election of President Evo Morales, it lied to the public and manipulated its own findings to help depose him.’ Jorge Bernal/AFP/Getty Images.

We need a new observatory of democracy in the Americas.

On 20 October, the US secretary of state, Antony Blinken, traveled to Ecuador to set out a vision for democracy in the Americas. Over the past five years, the hemisphere has suffered an assault on its democratic institutions, as political leaders from Donald Trump to Jair Bolsonaro have adopted a new authoritarian playbook: lies, violence, repression, and more lies. Two-thirds of US citizens now believe that democracy is under threat, while a majority of Brazilians fear a military dictatorship will return to the country. “We find ourselves in a moment of democratic reckoning,” announced Blinken.

But the Biden administration continues to put the US on the wrong side of this reckoning. Consider Blinken’s recent trip. In Quito, he lavished praise on President Guillermo Lasso in the same week that Lasso declared a nationwide state of emergency to intimidate critics of his government and distract from an investigation into alleged tax fraud following his appearance in the Pandora Papers leak. In Bogotá hours later, Blinken applauded the democratic credentials of the Colombian president, Iván Duque – “We have no better ally on the full range of issues that our democracies face in this hemisphere,” Blinken said – while his government stands accused of targeting protesters and allowing an unprecedented number of assassinations of Indigenous, Black, and peasant leaders to take place under his watch.

The US government is complicit in these attacks on democracy, not only as an “ally” but also as a leading member of the Organization of American States (OAS). Just two days after Blinken’s South America jaunt, the governments of Bolivia, Argentina, and Mexico held their own event at the Washington DC headquarters of the OAS to discuss the organization’s controversial role in the 2019 Bolivian election. The experts’ findings were clear – and damning: while the OAS found no evidence of fraud in the election of President Evo Morales, it lied to the public and manipulated its own findings to help depose him. “It was later reported that the US representative to the OAS actually pressured and steered the observation mission to reach a determination of fraud,” testified Jake Johnston of the Center for Economic and Policy Research.

Bolivia is not an isolated case. In Haiti, for example, the anti-democratic interventions of the OAS stretch over decades. In 2000, the OAS observer mission concluded that the Haitian election had been a “great success” only to change its position under pressure from Washington to claim it was illegitimate. The goal was evident: “to dislodge the Aristide administration”, as Dr Paul Farmer, deputy special envoy for Haiti at the United Nations, testified to Congress. Then, 10 years later, the OAS intervened again to reverse the result of the 2010 presidential election on the basis of faulty statistical methods. It is difficult to overstate the destabilizing consequences of these interventions. Juan Gabriel Valdés, the former head of the UN in Haiti, recently described the 2010 OAS decision as “the origin of the present tragedy” in the country.

The OAS, then, is no longer a credible observer of democracy in the Americas – particularly under the present leadership of Luis Almagro, which has been described as the “worst in history”. In the eyes of several member states, the institution is too beholden to US interests to provide an effective defense of democratic institutions, leading some to call for “autonomous” organizations to contest it. “The world is currently going through a very worrying moment, where attacks on democratic institutions happen with frightening frequency,” said Brazil’s former foreign minister Celso Amorim. “The creation of an international electoral observatory – popular and non-partisan – will fill an important gap in defense of democracy and human rights.”

What would such an observatory do? Three capacities are critical. The first would be to organize delegations to countries where democratic institutions are clearly under threat – both by domestic actors and international observers like the OAS. Bringing together data scientists and parliamentary representatives, these delegations would provide independent analysis of the electoral process and a defense against false narratives that threaten to derail it. The goal is not only to observe how votes are cast and counted; it is also to observe the observers.

The second critical capacity would be to launch investigations of unlawful interventions in the democratic process. Over the course of the last decade, the dominant mechanism of democratic undoing has been legal, namely the weaponization of the judicial system to intimidate, exclude, and even incarcerate political opponents – a tactic known across Latin America as legal warfare, or “lawfare”. Deploying a global network of legal experts, a new observatory could challenge these tactics to help ensure a free and fair democratic process.

The third and final capacity of the new observatory would be communications. In the technological era, bad information often travels faster than good. Big tech platforms such as Facebook not only serve to disseminate false stories and stir civic conflict; evidence suggests that their executives intervene to favor some candidates and ban others from the platform altogether. In the context of such bias, this new observatory would need to build an autonomous communications infrastructure to ensure that the findings of its delegations and investigations are rapidly spread, widely read, and well understood.

The call for a new observatory could not be more urgent. Contentious elections lie just on the horizon in 2022. In May, Colombia will head to the polls after a year of roiling protests against government violence, corruption, and a failed pandemic response. Five months later, Jair Bolsonaro will face Lula da Silva after profiting from his flagrant persecution on the road to the presidency in 2018. Bolsonaro and his allies in Congress have already pushed a legislative package to rewrite Brazil’s electoral laws, while parroting lies about potential fraud in the country’s electoral system.

Meanwhile, back in Washington DC, Secretary Blinken is moving ahead with plans for a Summit for Democracy. Convening leaders from “a diverse group of the world’s democracies” in early December, the summit aims to encourage commitments to fight corruption and respect human rights – an opportunity, as the White House press release suggests, to “speak honestly about the challenges facing democracy so as to collectively strengthen the foundation for democratic renewal”.

But the crisis of democracy will not be solved by summitry alone. We cannot delegate “democratic renewal” to our presidents, nor to the OAS that claims to represent them. We need an observatory to defend democracy from the bottom up – an institution with the capacity and credibility to fight authoritarian tactics and even the playing field for democracy to flourish. That fight starts now.

David Adler is the general coordinator of the Progressive International.