The Other Americans: Colombia’s Fragile Peace In Splinters

Above Photo: Indigenous women joined thousands in a peace march in Bogotá, Colombia in October 2016. A peace deal reached later that year is now threatened, as Colombia’s FARC Rebels, in a YouTube video posted in August, have accused the government of betrayal and announced that they will take up arms again.

The renewal of armed struggle follows neglect of the peace process from the far right. “[President] Duque is taking advantage of the discourse of Donald Trump to put back in place repressive politics,” a human rights defender says.

Early in the morning on August 29, a video appeared on Youtube in which Iván Márquez and Jesús Santrich, of the rebel group the Revolutionary Armed Forces of Colombia (FARC), each dressed in army fatigues and surrounded by armed men, announced that they were renewing their armed struggle against the Colombian government. The announcement comes nearly three years after the FARC had signed a peace agreement with the Colombian government, ending the country’s fifty-two-year-long internal armed conflict.

“This is the continuation of the rebel fight in answer to the betrayal of the state of the Havana peace accords,” Iván Márquez says in the video. “We were never beaten or defeated ideologically, so the struggle continues.”

“This is the continuation of the rebel fight in answer to the betrayal of the state of the Havana peace accords.”

The escalation marks the greatest challenge so far for Colombia’s fragile peace, which has faced many. Among them has been the refusal of the current Duque administration to implement the accords.

The peace accords were signed between the FARC and the administration of Juan Manuel Santos, the former Colombian minister of defense in the administration of then-President Álvaro Uribe Vélez, on September 26, 2016. A subsequent revised accord was signed on November 24 following an October referendum.

The agreement was set to demobilize the guerrilla forces from the hemispheres’ longest-running conflict in exchange for guarantees of immunity for certain crimes. The accords also set in motion the creation of the Special Jurisdiction for Peace (Jurisdicción Especial para la Paz, or JEP), which was designed to bring culprits of war crimes to justice.

“The accord signifies the means of resolving the causes of the war in Colombia,” Soraya Gutierrez, the president of the Bogotá based Collective Corporation of Lawyers (Corporación Colectiva de Abogados José Alvear Restrepo, or CCAJAR), tells The Progressive. “Not only to end the confrontation, but also the demands related to access to the land in campesino communities, and increase access to politics of many aspects of society.”

While the agreements ended the war with the FARC, they also opened up the regions of the country under the control of the guerrillas to exploitation by transnational companies. This aspect of the accords has led Wilson Arias, a Colombian Senator with the leftist Alternative Democratic Pole party, to describe them as being “neoliberal.”

“The peace function for neoliberal development,” Arias tells The Progressive. “The peace occurred for economic reasons.”

He points to the need of transnational companies for land within the country. The accords contributed to the establishment of a market for land in Colombia.

Santos won the Nobel Peace Prize in December 2016 for his efforts to achieve peace in Colombia. But the peace efforts were sabotaged by interests tied to the far right and landed elite.

The peace process was heavily resisted by the Colombian far-right. The mobilization of the rightwing and conservative forces associated with Uribe Vélez, and with the Catholic and evangelical churches led to a devastating “no vote” against the peace accords following a national referendum in October 2016.

The peace process was heavily resisted by the Colombian far-right.

“[Members of the far-right] managed to build an alliance with sectors from the evangelical and Catholic churches that developed a very strong opposition to peace accords that manipulate the vision of the accords,” Alberto Yepes Palacios, the coordinator of the Human Rights and DIH Observatory in Bogotá Colombia, tells The Progressive. “They argued that the peace accords had a gendered discourse, which they stated promoted homosexual practices in schools. This created a terror in profoundly religious families, promoting the idea that peace would be a grand catastrophe for families, and that parents would lose influence.”

This was a perversion of what the accords were meant to accomplish, which was to incorporate and open space for minority communities in Colombia. According to Yepes Palacios, many of the Catholic parishes that opposed the peace accords have since walked back their opposition.

The agreements also faced criticisms for the impunity granted to guerrillas, especially as the United States seeks extradition of guerrilla leaders, particularly Jesús Santrich, on accusations of being connected to narco-trafficking. The JEP ordered the immediate release of Santrich in May 2019.

The rightwing administration of  Iván Duque, widely seen as being the political successor of Uribe Vélez, has done little to implement the accords. 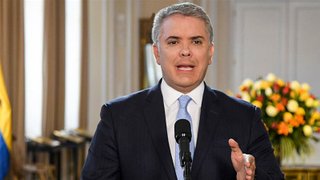 “This government has been restricting the peace process and putting it at risk,” Gutierrez says.

The U.S. government under Donald Trump has only pushed Colombia towards further conflict.

The Trump Administration has called for Colombian government to increase the drug war in the country. Trump complained to the press in 2018: “I’ll tell you something: Colombia, you have your new president of Colombia, really good guy. I’ve met him, we had him at the White House. He said how he was going to stop drugs. More drugs are coming out of Colombia right now than before he was president—so he has done nothing for us.”

The United States has pressured the Duque administration to increase fumigation of coca fields, in spite of laws that limit the use of harmful chemical herbicides.

“Duque is taking advantage of the discourse of Donald Trump to put back in place repressive politics,” Yepes Palacios says. He points to the deep alliances between the Colombian military and paramilitaries and drug traffickers, and notes the violence that the war on drugs has created for people living in the countryside.

“The war against drugs is poorly designed, it doesn’t produce successes,” Palacios says. “To send the military into a war against drug traffickers, knowing that these deep connections between paramilitaries that control drug trafficking, produces these types of results.”

The Duque administration has revived the Uribe administration’s plan for national security, which led to the rise in extrajudicial killings, known as false positives, at the beginning of the 21st century. It is estimated by Gutierrez that at least 5,000 people, largely poor farmers, were killed and then dressed in military uniforms to make them look like insurgents.

“We are returning to the old politics,” Gutierrez told The Progressive. She points to a recent article from the New York Times exposing military orders to double the killings of criminals and militants.

And killings have increased. Between April 2018 and April 2019, 479 social leaders and ex-guerrillas were murdered and another 982 were threatened by paramilitary forces, which often have direct ties to the Colombian military. According to the United Nations, 137 of those killed were demobilized members of the FARC.

“This is a troubling statistic,” Gutierrez says. “We do not want to return to what occurred with this state terrorism. But today, we are seeing new tactics of repression.”

She adds, “This is a strategy of extermination.”