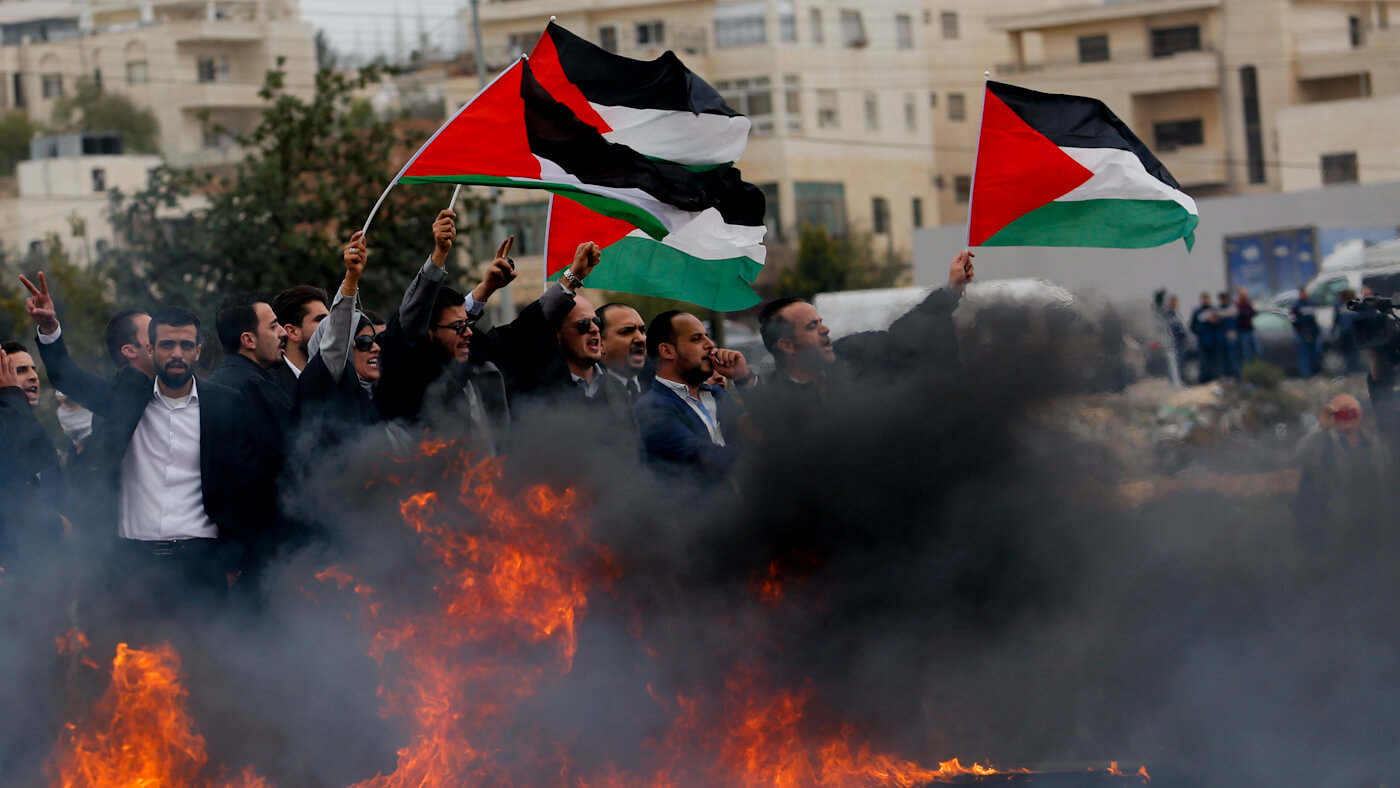 Above Photo: A group of Palestinian lawyers holds national flags during a protest against U.S. President Donald Trump’s decision to recognize Jerusalem as the capital of Israel, in the West Bank city of Ramallah, Dec.13, 2017. Nasser Shiyoukhi | AP

There is a solid, grassroots leadership in Palestine. From Al-Jalil in the north to the Naqab in the south, and from the River Jordan to the Mediterranean Sea, Palestinians on the ground are well aware that the Hamas-Fatah politics have little to do with them.

JERUSALEM, PALESTINE – Among the myths that cover the reality in Palestine is the one that says Palestinians have no leadership, no unified message, and that the Hamas-Fatah divide represents the entire political reality in Palestine. There is also a myth that claims that the Palestinians of 1948, who carry Israeli citizenship, are somehow not connected to the larger Palestinian issue. Over a ten-day journey in Palestine, it becomes crystal clear that these claims are unfounded.

There is, in fact, a solid, grassroots leadership in Palestine. From Al-Jalil in the north to the Naqab in the south, and from the River Jordan to the Mediterranean Sea, Palestinians on the ground are well aware that the Hamas-Fatah politics have little to do with them. The last elections in Palestine took place in 2006 and both the Hamas government in the Gaza Strip and the Fatah government in what used to be the West Bank have lost their legitimacy and the support of their people. However, on the ground in the towns and villages there is a strong, dedicated leadership that cares for Palestine and its people. That leadership is constantly targeted by the Israeli authorities.

Both Hamas and Fatah, which make up the two parts of the Palestinian Authority, have given up on the vision to free Palestine and instead are focused on their own survival within the confines that Israel created for them. What is referred to as the Two State Solution is the best-case scenario they are able to envision. In case the past seven decades have not made it clear that the Israeli government will never recognize the Palestinian right to self-determination, Israel recently passed a law that clearly states only Jews have the right to self-determination in Palestine. The Two State Solution is a Zionist strategy that allows it to continue to dominate Palestine and its people while blaming Palestinians for not wanting peace.

It is well known that Hamas leaders in the Gaza Strip, like all Gazans, are confined to the boundaries that surround them. Fatah leaders in Ramallah enjoy a little more freedom, but even the Palestinian president needs a permit if he wishes to travel from Ramallah to Bethlehem and a junior Israeli army officer at a checkpoint has the authority to stop him if he so wishes. Both Fatah and Hamas accepted the abnormal reality in which they find themselves as the norm.

This is also in many ways true regarding the political leadership of Palestinian citizens of Israel. The members of Knesset who represent them are powerless and they too speak of the Two State Solution as the preferred or at least the most realistic solution to the occupation of Palestine. It is as though the ongoing oppression and discrimination suffered by Palestinian citizens of Israel are somehow a separate issue from the oppression and discrimination to which Palestinians in other parts of the country are subjected.

Fatah and Hamas exist in the lands Israel occupied in 1967. Within the borders of 1948 there are more political parties and political life is slightly more robust. But until Palestine is free and until Palestinians are given the same rights as Israelis, political parties are irrelevant. Only when one person-one vote elections that include all of Palestine are held will political parties be relevant. At that point, Palestinians will have a voice and will be able to determine their political fate and it will matter what political ideology rules. At this moment it matters little if one is a socialist, nationalist, Islamist, or something else because Israel dominates the lives of all Palestinians in a regime that is racist and discriminatory.

When all Palestinians are free to vote as real citizens, and not under an apartheid regime as they are today, we can also expect that the Palestinian political prisoners will have been freed and they too will be able to contribute to the makeup of the political life of the country.

What matters most until then is the vision of a free Palestine and the struggle that will make that vision a reality. This is a struggle that has been undertaken by a small, dedicated group of activist leaders who are on the ground, caring for their people, respected in their communities — and who are also incorruptible and untouchable. Among this group the goal is clear, the method is clear.

Many among them supported the Two State Solution at one point. However, they saw that the Palestinian willingness to give up 78 percent of their land in order to achieve peace only made things worse. Israeli settlements, Israeli abuses, the diminishing of rights and shrinking of their land all made it clear that there can be no peace with Israel and that Zionism is incompatible with peace.

Where is the world?

European and American leaders promised the Palestinians that if they compromised, if they bowed their heads, if they only choked down and swallowed the rape and pillage of their homeland, then they would be given a small piece of it to call their own and to establish a state. The Palestinians, in general, accepted that painful compromise, but now it is clear that Israel abused their faith, that Israeli promises are empty, and that Western guarantees are meaningless.

It happened in Lebanon, where guarantees were given to the Palestinians that the refugee population would be safe once the PLO agreed to go into exile in Tunis, and within two weeks Israel orchestrated the massacres in Sabra and Shatila. And it happened again when the Palestinians were told that if they agreed to the incremental approach and the vague details of the Oslo Accords then they would get Gaza and Jericho first and a promise that within five years they would have their own state.

Talk to the people who matter

The people who matter now are the local leaders on the ground who are committed to the vision of a free democratic Palestine from the River to the Sea. These people are also dedicated to the struggle and understand the role of armed and unarmed struggle within the Palestinian context.

Clearly, the call for boycott, divestment and sanctions is crucial, as are other forms of struggle, including the use of all forms of media to expose Israeli crimes. Visits of these Palestinian leaders and activists to speak in the U.S. and Europe are also part of the struggle, and visits of foreign politicians to Palestine should be focused on frank discussion with them. Inevitably, this will push Western politicians to stop talking about the Two State Solution, which means stepping out of the Zionist paradigm whereby Israel has all the rights and all the power.

Encouraging the dedicated local leaders to continue their work and providing protections for them when Israel cracks down on them and their families are paramount. People on the outside who care for Palestine need to pay attention to these Palestinian voices and, rather than simply expressing solidarity, roll up their sleeves, embrace the vision, and join the struggle for a free and democratic Palestine.