The Pandemic As Part Of A Much Broader Crisis Of Civilisation

The corona crisis has already killed hundreds of thousands of people worldwide.

Politicians and society as a whole have rightly focused on combating the virus. However, underneath the pandemic there is still an environmental catastrophe exploding in slow motion. The corona crisis is only a small part of this puzzle.

Covid-19 was first identified in November 2019 in the city of Wuhan. It is an infectious disease caused by a virus which is highly likely to have ‘jumped’ from a horseshoe bat to a human. This is widely known and yet it is striking how little is said about the actual implications. What are the impacts for us when humans can contract deadly diseases from animals? Is this normal? Or is it an isolated incident?

Sadly, such cases of viruses being transmitted to humans from vertebrates are certainly no exception. 60% of infectious diseases that affect humans originate from vertebrates. These are known as ‘zoonotic’ viruses, and their numbers rise even further when we look at the origins of emerging infectious diseases: 75% of new pathogens that make humans sick originate in wildlife.[1]

But how did the virus ‘jump’ from an animal host to a human? To answer this question, we must first take a step back and examine the relationship between animals and humans, as well as the bigger picture of how human beings interact with the natural world. It is significant that 2019, the year of the ‘zoonotic event’ in which the coronavirus crossed the species barrier to infect humans, was also the hottest year on record globally. This immediately calls to mind the issue of ‘planetary boundaries’. These ‘boundaries’ are a concept developed by scientists at the Stockholm Resilience Centre.[2] At present, the ‘boundary’ most keenly observed and considered to be the most pressing is that of global warming. There is very little time left to keep the global temperature below a maximum of 1.5°C compared to pre-industrial levels.

Yet this is just one of several global boundaries: if we continue to transgress these limits into the years to come, the price will be our own annihilation. If we as human beings wish to ensure our continued existence in a safe environment, we not only have to approach the 1.5°C target, we must also protect the oceans from acidification, preserve humus layers for our agricultural production, safeguard natural biodiversity and much more. But also here the situation is worsening dramatically: three of these eleven boundaries have already been transgressed. 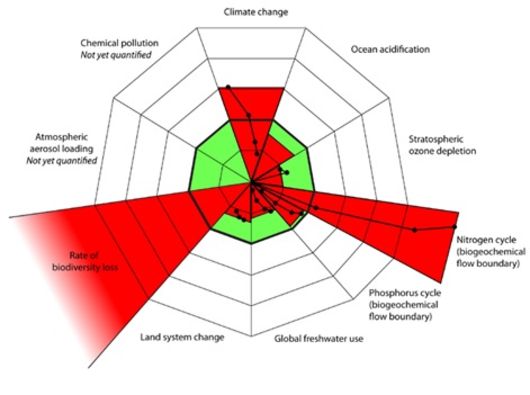 Note: The inner (green) shaded nonagon represents the safe operating space with proposed boundary levels at its outer contour. The extent of the wedges for each boundary shows the estimate of current position of the control variable. Points show the estimated recent time trajectory (1950–present) of each control variable. For biodiversity loss, the estimated current boundary level of >100 extinctions per million species-years exceeds the space available in the figure.

The extent of the extinction of species has already reached catastrophic proportions. Scientists therefore call our age the age of the sixth mass extinction.

But what does all this have to do with the current pandemic? Two of the planetary boundaries are biodiversity and land-system change, i.e. the issue of cutting down forests. These two ‘boundaries’ alone go a long way to explaining what caused the coronavirus to come about in the first place: the fact that humans are interfering way too much in the natural world.

Capitalocene and the exploitation of the Global South

The main cause of the coronavirus and similar crises is the continuous incorporation of ever-larger sectors of economic activity into international capitalist supply chains. Here we must make clear that it is not ‘humans’ per se who are responsible. That is why it is better to use the term Capitalocene than Anthropocene. The latter term suggests that humans as a species are responsible for the current level of environmental destruction. However, it is not humans per se but capitalist accumulation and power relations.[3]

The financialization of an economy driven by competition leads to countries in the Global South being forced to exploit their natural resources at an ever-increasing rate and to expand their agricultural land even further. One of these ‘natural resources’ are, of course, animals, a growing number of which are held under terrible conditions, being farmed intensively. It is precisely those vertebrates we consider to be ‘ours’ (sheep, cows and pigs) that carry the most viral strains (30 on average), while wild animals generally only carry one.[4]

The Capitalocene is witnessing the rising destruction of more areas of nature that were previously largely untouched. The animals living in these habitats are put under enormous strain, so much so that entire species either die out. Individual animals are put under high levels of stress, which damages their immune system and thus makes them more likely to carry pathogens. These animals then have a higher chance of coming into physical contact with humans. In addition to encroaching agriculture and rising resource extraction, the large-scale expansion of roads and cities are partly responsible, as both lead to higher levels of deforestation and traffic, which, in turn, can help viruses to spread. At a global level, the aviation industry is, of course, a main direct contributor to the rapid spread of viruses.

New scientific approaches for a holistic understanding of ‘planetary health’

It is no coincidence that scientists are currently discussing two concepts that widely tally with the left’s criticisms of neoliberal globalisation. On the one hand, there is the ‘One Health’ concept, which advocates bringing together human and veterinary medical experts, who then work alongside anthropological and economic specialists to enable holistic health. The other project is called ‘Planetary Health’, which ‘focuses on the links between human health and the political, economic and social systems, as well as our planet’s natural systems, on which the existence of human civilisation depends’.[5]

‘From Public to Planetary Health: a manifesto’ offers exciting starting points for diverse and rebellious practices. The manifesto discusses the need for a new ‘philosophy of life’, which openly condemns the dominant neoliberal world order and explains the bonds that tie humankind together, but also with the natural world, as a necessary preconception to reaching a ‘new understanding of planetism and the wellbeing of all’. These words represent a board reflection of the foundations of a ‘good life for all’, a project the global left has long been campaigning for.

Western Cartesianism is opening up to other epistemologies

This novel awareness and the new language it creates offer clear points of connection to epistemologies (theories of knowledge) and praxes from societies of the Global South. Examples include the Latin American concepts of sumak kawsay and buen vivir, which are particularly well known today, but also principles that are sadly seldom discussed in Europe, such as India’s Sarvodaya or Gram Sabha movements, South African Ubuntu or Julius Nyerere’s ujamaa concept.

In the United States and the European Union, the term ‘Green New Deal’ has been widely discussed, mainly since March 2019. Although this extremely diverse project experienced a significant setback with Bernie Sanders’ withdrawal from the US Democratic Party presidential primaries on 8 April 2020, within the broad left-wing movements of the Global North, it remains the only proposal with the power to unite members in transformative debate.

As it is discussed within leftist circles in the US and in Europe, the Green New Deal offers plenty of brilliant starting points, but unfortunately, in both cases, the packages of measures suggested are only designed for the respective continents. Here the left on both sides of the North Atlantic has plenty to learn from the aforementioned political projects and epistemologies developed by societies of the Global South. This is one of the reasons why this year transform! europe has launched a series of webinars in partnership with the Rosa-Luxemburg-Stiftung (RLS) Brussels, the RLS New York and the Transnational Institute (TNI). In this series, we will discuss the shape an a priori internationalist ‘Global Green New Deal’ might take.https://www.transform-network.net/typo3/#_ftn4 It is a political project whereby Europe would be clearly ‘provincialized’.

A provincialized Europe as part of a global radical project

In the 1990s, a fantastic philosophical ‘dialogue initiative’ between Latin American philosophers of liberation and representatives of European discourse theory was held. The aim was to discuss the question of how a transcultural philosophy could be effective from the standpoint of the oppressed and the excluded. This discussion took place against the backdrop of the rejection of the theories of ‘realising the ideal communication community’, which was mainly associated with Habermas and Karl-Otto Apel.[6] The ‘uprising’ against the European representatives of ‘incomplete modernity’ (Habermas) was spearheaded by Enrique Dussel, the most widely recognised proponent of the philosophy of liberation. Since an attempt was made on his life during a bomb attack in his homeland of Argentina in 1973, Dussel has lived and worked in Mexico, from where his transmodernity project, which is centred on the excluded and the oppressed, has helped anti-hegemonic epistemologies gain traction.

We can thus see that the coronavirus did not just appear from nowhere. The virus is a particularly terrible and manifest crisis affecting global society, but it is also not an isolated event, the likes of which will never be seen again. The coronavirus is the result of an unsustainable way of living, exacerbated by the logic of capital and the consumerism that goes hand in hand with it. The pursuit of high profits, the class war waged against the oppressed, and the constant valorisation of nature within the capitalist system are the causes of this devastating crisis. If we do not create a good life for all human beings and their local communities, then this crisis will pale in comparison to those yet to come.