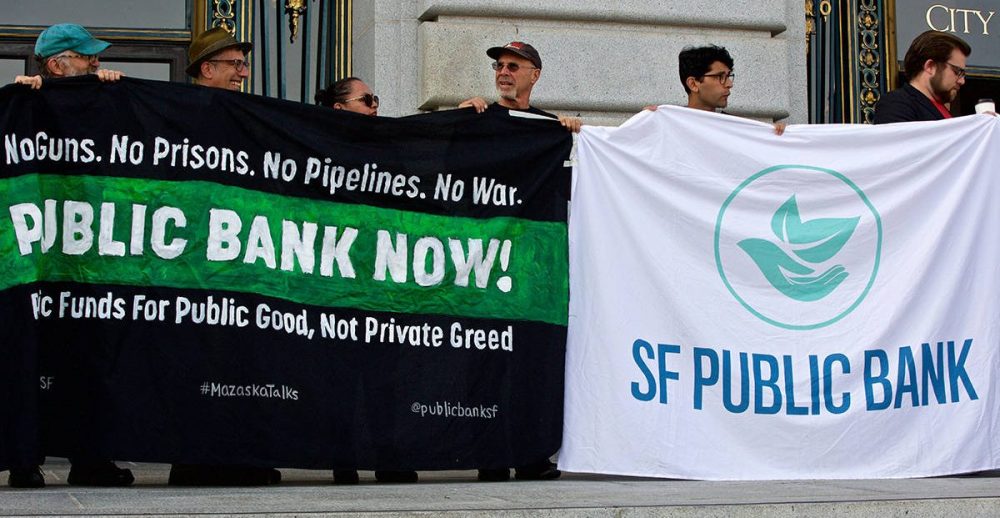 As marginalized families without bank accounts struggle to get stimulus checks, it’s time to fix the rusty pipes of our inequitable financial system.

The COVID-19 pandemic response has shown that the very foundations of our economy are shaky, fragile, and — for some of us — downright dangerous. We’re once again watching working people, especially working people of color, bear the brunt of the fallout. Meanwhile, big companies traded on the stock market took two-thirds of the money meant to bail out small businesses.

But in getting relief out, it’s also become clear that we have a plumbing problem. We are forced to rely on the banks as middlemen to deliver government assistance. Some of them are seizing our stimulus payments to pay themselves. And as big banks have exited the business of serving poor people, 1 in 4 U.S. households are now underbanked or unbanked. This has predictably led to marginalized communities and households waiting in distress for life-sustaining stimulus, simply because they lack access to a bank account.

The good news is that there’s another way. The pandemic has shown that we need a public option for basic banking services. Legal scholars Morgan Ricks, John Crawford, and Lev Menand have called for the Federal Reserve System to directly offer accounts to all U.S. citizens, residents, and small businesses. Today, only privileged banks and governmental entities are allowed to have these high-interest, low-fee accounts. But the Fed could easily offer the same option to everyone and provide better consumer safeguards than Wall Street, as well as higher interest, faster payments, and complete deposit protection. As a recent New York Times editorial endorsing FedAccounts for getting out stimulus payments put it: “Stop Dawdling. People Need Money.”

The Fed could also work with USPS to broaden its reach — strengthening our postal system at a time when it is facing continued attacks from predators. As our friends at the Roosevelt Institute have put it, Fed Accounts For All could make sending money as easy as transferring funds through Venmo or Paypal — but with Fed Accounts For All, everyone could do it, without relying on Wall Street (or Silicon Valley).

Even after the pandemic, Fed Accounts For All could make it easier to prioritize assistance through more direct fiscal policy, avoiding ongoing issues with delayed funds, debt collection, and frozen bank accounts. A public option for basic banking services, and an improved, publicly accountable payments system, are necessary parts of a recovery infrastructure that works for everyone.

House Financial Services Chair Maxine Waters introduced legislation to create FedAccounts, and the Ranking Member on the Senate Banking Committee, Sherrod Brown, also introduced a bill to use FedAccounts. Their proposals would ensure that no one needs to use an expensive check casher to access their stimulus payment because the Fed in partnership with the U.S. Postal Service could deliver the payments to every household.

These bills were incorporated into the House version of the CARES Act in March. Unfortunately, the Senate stripped this provision out of the bill that passed. But it’s not too late for them to get it right in the next stimulus bill. Our unbanked and underbanked neighbors are depending on it.

Raúl Carrillo is a Fellow at the Americans for Financial Reform Education Fund. Follow him @RaulACarrillo.