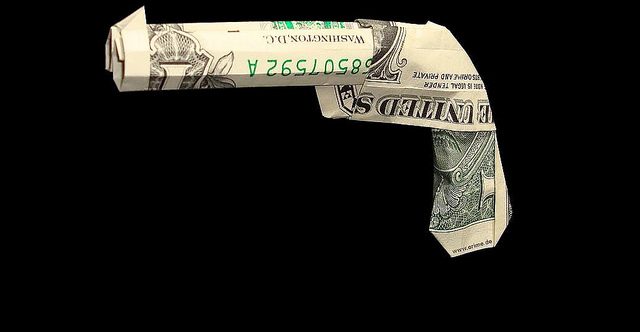 The Pentagon Failed Its Audit Amid A $21 Trillion Scandal (Yes, Trillion)

New York Congresswoman-elect Alexandria Ocasio-Cortez was ruthlessly attacked recently, and I feel a bit responsible. I might have accidentally tainted her Twitter feed with truth serum.

But that sounds weird—so let me back up.

A few months ago, I covered the story of the $21 trillion that has gone unaccounted for at the Pentagon. That’s right—trillion with a T—an amount of money you can’t possibly come to terms with, so stop trying. Seriously, stop. It’s like trying to comprehend the age of the earth.

(The earth is 4.5 billion years old. To put that into context, the Intergovernmental Panel on Climate Change says we have 11 years left to completely change our ways or climate change will make the earth uninhabitable. If you were to take the age of the earth and lay it out on the span of a calendar year, this means we would have less than a millisecond left on Dec. 31 to utterly change our ways or all is lost.)

Anyway, the $21 trillion includes $6.5 trillion unaccounted for at the Pentagon in 2015 ALONE. When I covered all this a few months ago, very few people were talking about it. David Degraw investigated it for his website (which has since been destroyed by hackers), and Mark Skidmore, the economist who discovered the unaccounted adjustments, co-authored a single Forbes articleon the subject. And by “discovered,” I don’t mean that Skidmore found a dusty shoebox in Donald Rumsfeld’s desk underneath the standard pile of baby skeletons. I mean that he took a minute to look at the Defense Department’s own inspector general’s report. So really he just bothered to look at the thing that was designed for the public to look at.

Anyway, my column on this topic went viral, as did the Forbes article, each garnering hundreds of thousands of views. Yet despite all that, still not a word from Congress, and not a word from the hacks at your mainstream media outlets. But then again, getting important news about the corruption of our military-industrial complex from the mainstream media would be like getting a philosophy lesson from a strip-club dancer (in that it would be most unexpected, and it’s not really why you’re there).

But just a few weeks ago, something significant happened. It took place in a quiet news dump during a Pentagon press conference that TRULY began like this:

DEPUTY SECRETARY OF DEFENSE PATRICK SHANAHAN: So you guys know why I came down here today?

REPORTER: To see if we ate the donuts?

During that wacky press conference, the deputy secretary of defense casually mentioned halfway through that the Pentagon had failed its first-ever audit.This is the first time the Pentagon has ever been audited, even though it has been legally required to do so since the early 1990s. Don’t you wish you could put off your tax returns for 20 years? (I once put them off for two years, but it wasn’t a conscious decision. It was simply the period of my life when I discovered that Netflix had every episode of “The West Wing.”)

After Shanahan dropped this bombshell, here was what followed:

REPORTER: What part did the Pentagon fail in the audit?

SHANAHAN: How about I give you, like, the technical version of that—there are a considerable number of areas where we kind of had a pass, then there’s some other ones where they went through and they said we went into your inventory system and we didn’t find these things; therefore that’s a finding, so you don’t have a clean assessment. So—and—in a lot of these audits, it’s the type of finding that matters.

And yet even THAT didn’t get much press coverage. As far as I can tell, The New York Times didn’t report on the audit failure until two weeks later, and even that column contained this caveat:

But audits are hard work; most defense officials aren’t business experts; and to some, bookkeeping and other management operations just aren’t a priority in wartime, which since Sept. 11, 2001, has been a permanent state.

In the Times’ defense, there are different genres of reporting, and in this case, journalists were working in the genre of “shit reporting.” So should we really be surprised? If they want to learn what real reporting looks like on this same topic, they can read The Nation’s investigative exposé. That article stated:

For decades, the DoD’s leaders and accountants have been perpetrating a gigantic, unconstitutional accounting fraud, deliberately cooking the books to mislead the Congress and drive the DoD’s budgets ever higher. … DoD has literally been making up numbers in its annual financial reports to Congress—representing trillions of dollars’ worth of seemingly nonexistent transactions … according to government records and interviews with current and former DoD officials, congressional sources, and independent experts.

It doesn’t get much clearer than that. (The following page in the magazine was simply an image of a hand dropping a mic.)

So here’s how this fraud works: Every year, the Pentagon tells Congress how much money it needs. It submits the financial reports from the year before, filled to the brim with heaping, steaming bullshit. Trillions of gallons of bullshit, called “adjustments.” Those adjustments cover up the fact that it didn’t necessarily spend all the money the year before.

“However, instead of returning such unspent funds to the US Treasury, as the law requires, the Pentagon sometimes launders and shifts such moneys to other parts of the DoD’s budget,” The Nation’s Dave Lindorff wrote.

And this is no mistake. This is straight-up fraud. How do you know when something is fraud? Well, one way is when the paper trail is covered up, as Lindorff noted:

Indeed, more than 16,000 records that might reveal either the source or the destination of some of that $6.5 trillion had been “removed,” the inspector general’s office reported.

Sixteen thousand records! By my calculations, such a cover-up would require multiple shredder operators working in shifts, only stopping once every five hours to use the bathroom and briefly giggle at their villainy.

One congressional staffer [said] … “We don’t know how the Pentagon’s money is being spent. … We don’t know how much of that funding gets spent on the intended programs, what things actually cost, whether payments are going to the proper accounts. If this kind of stuff were happening in the private sector, people would be fired and prosecuted.”

Here’s more analysis from The Nation:

The Pentagon’s accounting fraud diverts many billions of dollars that could be devoted to other national needs: health care, education, job creation, climate action, infrastructure modernization, and more. Indeed, the Pentagon’s accounting fraud amounts to theft on a grand scale—theft not only from America’s taxpayers, but also from the nation’s well-being and its future.

But apparently, disappearing at least 16,000 documents wasn’t enough. Somebody might still connect the dots. So the Pentagon took the next step:

Right after The Nation article came out, Ocasio-Cortez tweeted about it—basically saying that these unaccounted trillions at the Pentagon could help pay for “Medicare for all.”

Clearly things are ramping up. People are finding out about the $21 trillion, and that means it is now time for the true hacks—the military-industrial complex defenders—to jump in and chastise anyone who dares speak out about this fraud. Enter Vox—-which, if you’re unfamiliar, is a cross between HuffPost and an NPR tote bag filled with rotting raccoon carcasses.

Error?! Yeah, and Timothy McVeigh just had a faulty carburetor.

Vox “journalist” Matthew Yglesias tried to push this idiotic justification: “The Pentagon’s accounting errors are genuinely enormous, but they’re also just accounting errors—they don’t represent actual money that can be spent on something else.”

Let’s recall that this is not simply a matter of boring accounting. Trillions in unaccounted outlays, if that’s what’s involved here, is trillions of our tax dollars being spent without our knowledge. If that’s the case, we’re talking about the biggest government financial deception in the history of the country.

Long story short, this $21 trillion story is starting to gain traction. People can finally see the truth. And right now, it is the corporate media puppets who are trying to make sure you think, “It’s just a few accounting errors. Pay no mind to the fact that it amounts to the largest theft ever perpetrated against the American people.”

If you think this column is important, please share it. Also check out Lee Camp’s new comedy special, which one review called “the new standard for political stand-up comedy.” It’s only available at LeeCampComedySpecial.com.

This column is based on a monologue Camp wrote and performed on his TV show “Redacted Tonight.”