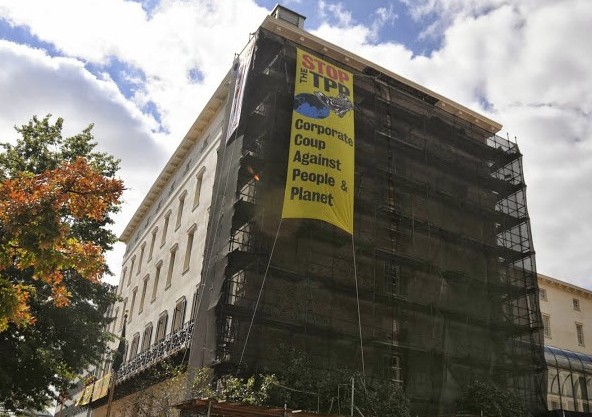 The People Can Defeat the Trans-Pacific Partnership

Momentum is growing in the campaign to stop the Trans-Pacific Partnership (TPP).  Yesterday, the TPP was dealt two blows. Each could be lethal but the TPP, and its Atlantic counterpart, called TAFTA, are not dead yet. It is time for the movement of movements that formed to oppose the TPP to stand in solidarity, defeat these agreements and end the era of rigged corporate trade.

Yesterday’s first blow came from Wikileaks, showing once again that when government works in secret with big corporations, exposure by whistle blowers is critical to changing the corrupt direction of government and the economy.  Wikileaks published the full text of the intellectual property chapter; the leaked document  included the positions of all the parties.  It will take time for all the corporate rigging in this lengthy document to be understood, but already it is evident that Internet freedom will be curtailed, access to healthcare will become more expensive and access to information will be undermined.

This is not the first leak of TPP text. Previous leaks are consistent with the Wikileaks leak – enhanced corporate power that puts profits before the needs of the people and the protection of the planet.  The Wikileaks release shows that the United States is by far the most aggressive advocate for trans-national corporate interests, often isolated in pushing for harmful policies.

The second blow came from members of the U.S. House of Representatives.  In recent days, several letters were sent to President Obama opposing Fast Track Trade Promotion Authority.  Fast Track undermines Congress’ responsibility under the Commerce Clause to regulate trade between nations by allowing the president to sign the agreement before Congress even sees it. The letters made public on November 13th demonstrate broad bi-partisan opposition to Fast Track with 179 Members signing at least one of the three letters.

“we will oppose ‘Fast Track’ Trade Promotion Authority or any other mechanism delegating Congress’ constitutional authority over trade policy that continues to exclude us from having a meaningful role in the formative stages of trade agreements and throughout negotiating and approval processes.”

Important leaders of the Democratic Party signed the letter including 18 out of 21 Ranking Members who would chair committees if the Democrats were in the majority.  This means that to pursue Fast Track authority, President Obama will need to challenge three-quarters of his own party.

But, that is not all. In another letter, organized by Mike Thompson (D-CA) and Earl Blumenauer (D-OR) and signed by 12 of the 16 Democratic Party members of the Ways and Means Committee, which is primarily responsible for Fast Track legislation, members expressed opposition to Fast Track unless it was radically different from previous grants of authority. The letter says it “cannot just be an extension of earlier trade promotion authorities. Any new proposed TPA must . . . ensure Congress plays a more meaningful role in the negotiating process.”

And, the opposition is bi-partisan. Rep. Walter Jones (R-NC) and Rep. Michelle Bachmann (R-MN) drafted a letter signed by 23 Republicans.  The Republican letter emphasized that Congress has the “exclusive authority to set the terms of trade.” Further, “The Founders established this clear check and balance to prevent the president from unilaterally negotiating with foreign nations and imposing trade policies that Congress would deem to be against the national interest.” They write that they refuse to “cede our constitutional authority to the executive” through Fast Track.

These are just the latest problems in the quest for Fast Track, indeed a bill has yet to be introduced.  The previous US Trade Representative, Ron Kirk, said in 2012 “We’ve got to have it.” He wanted the authority by the end of 2012.  In April, Sen. Max Baucus (D-MT) promised Obama Fast Track by June of 2013.  The broad bi-partisan opposition announced this week shows that winning Fast Track has very little support in Congress.  In fact, the letters may be the death knell for such legislation.

The Wikileaks documents show there is a lot of division among the negotiating nations with important disagreements on key aspects of the text. Without Fast Track to guarantee passage of the TPP, these nations will be even less likely to agree to demands by the U.S.  Further, Asian countries are negotiating their own competing agreement, which does not include the United States but, unlike the TPP, does include China.

Latin American countries are also speaking out against the TPP. Earlier this year, Rodrigo Contreras, Chile’s lead TPP negotiator quit to warn people of the dangers of the TPP – highlighting how big financial institutions will dominate their governments and how the TPP “will become a threat for our countries: It will restrict our development options in health and education, in biological and cultural diversity, and in the design of public policies and the transformation of our economies. It will also generate pressures from increasingly active social movements, who are not willing to grant a pass to governments that accept an outcome of the TPP negotiations that limits possibilities to increase the prosperity and well-being of our countries.” And, recently the Parliament of Peru passed a resolution “requesting that the government open a ‘public, political, and technical debate’ on the binding rules being negotiated in the TPP.”

In the United States, cities and counties are beginning to pass TPP Free Zones, saying they will not obey the TPP if it becomes law.  These local governments are concerned with provisions that would not allow them to give preference to buying local, buying U.S. made goods or other provisions that undermine their sovereignty.

In addition to opposition in the U.S. government and foreign governments, a mass citizen uprising is developing against the TPP.  There have been large protests in many of the countries involved in the negotiations as well as in the United States. The night before the Wikileaks documents were released, 13 cities did visibility protests opposing the TPP in light shows.  In September we joined with activists in Washington, DC in a series of protests, including covering the office building of the US Trade Representative in banners to expose their secret trade agreement. Protests are scheduled for Salt Lake City, UT on November 19th where lead negotiators from 12 countries will hold meetings. A global day of protest is planned for December 3 against not only the TPP but also the WTO and all toxic trade agreements.

The TPP is running into resistance in Congress, local governments and among Pacific nations in Asia and Latin America; and by people who oppose the agreement all over the world. This is part of a growing movement of movements – all of the movements impacted by corporate trade, e.g. labor, environmental, Internet freedom, healthcare, food sovereignty, immigrant’s rights, banking regulation –  are joining together to defeat it.

The people are winning. Fourteen trade agreements have been stopped in the last 14 years and as Tom Donohue of the US Chamber of Commerce wrote this week “the WTO has not concluded a single new multilateral trade agreement since it was created in 1995.” Mass protest against rigged corporate trade agreements can end the experiment in trade that puts profits ahead of the people and planet.

We are on the verge of defeating Fast Track. It is important that we keep the pressure on Congress. Neither the TPP nor TAFTA will become law if people learn what is in them and Congress fulfills its constitutional responsibility to review their impact. Denying the President Fast Track is the essential step to defeat both of these agreements.

Once we defeat Fast Track and prevent TPP and TAFTA from becoming law, we need to remain in solidarity and work to transform trade so it becomes “fair” trade that puts the necessities of the people and the protection of the planet first. The people will have firmly established that they will not tolerate rigged corporate trade deals. If corporations want to see trade between nations, they need a new approach – transparent, participatory and fair – with new goals of serving the people and planet.

To get involved in the campaign to stop the Trans-Pacific Partnership visit http://www.FlushTheTPP.org.

Kevin Zeese, JD and Margaret Flowers, MD are participants in PopularResistance.org; they co-direct  It’s Our Economy  and co-host  Clearing the FOG  shown on UStream TV and heard on radio. Their twitters are @KBZeese and MFlowers8.