The People Demand Urgent, Vital, And Ambitious Action A COP 24

Above: Thousands march in Brussels before COP 24.

Note: The People’s Demands for Climate Justice are the measure by which COP 24 should be measured as a success or failure. Popular Resistance is one of the endorsing organizations for these demands. There have been more than 290,000 signatures of people from more than 130 countries! And 365 organizations/leaders have signed on as well. You or your organization can sign on as well, see here.

Joshua Hill reports on the rocky start of COP 24:

The 24th Conference of the Parties to the United Nations Framework Convention on Climate Change, better known as COP24, got underway on Sunday in Katowice, Poland, to something of a rocky start, despite a call from previous COP Presidents to “send an unequivocal message … for enhanced ambition by 2020 that puts the world on a trajectory compatible with the objectives of the Paris Agreement.”

Straight out of the gate, however, the opening plenary was delayed on Sunday in part because of a request from Turkey to downgrade its status to that of “developing country” — a move intended to soften Turkey’s responsibilities. Developed countries — those listed in the Convention as Annex I countries — are expected to contribute more to climate financing and emission reductions than developing nations. The COP presidency agreed to schedule consultations on Turkey’s proposal.

Similarly distracting from the core purposes of the Conference is the position of host country Poland regarding its reliance upon coal for its electricity generation. Protestors picketed the site of a former coal mine in Poland over the weekend in an effort to shine a light on the country’s coal industry. According to the World Energy Council, Poland consumes 77 million tonnes of coal per year, making it the tenth-largest coal consumer in the world and the second-largest in the EU, after Germany, securing 92% of its electricity and 89% of its heat from coal.

This comes after the United States continued to impose its gravity on the Conference, promising to put on a literal coal sideshow on the sidelines of the event only days after it was revealed that the US had been responsible for a dramatic watering-down of the joint communique (PDF) published at the end of last week’s 13th meeting of Group of Twenty (G20) held in Buenos Aires, Argentina — though it turned out to be only marginally better than previous draft versions. 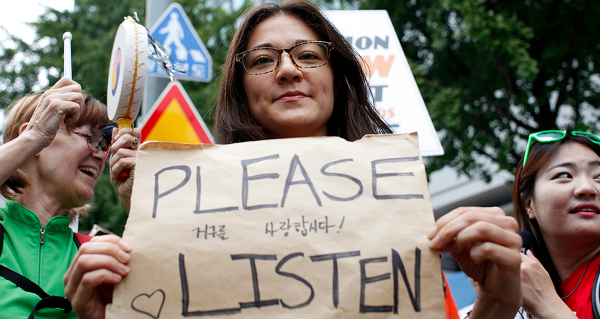 Climate change is the crisis of our time. Its intensifying impacts are affecting millions of people around the world, the health of our planet, and is driving species extinction. It is disproportionately affecting the people and communities globally who have contributed the least to creating this planetary emergency.

This crisis requires urgent, vital, and ambitious action. And this ambition must center people’s lives and human rights, and be grounded in principles of equity and historical responsibility. This December, at COP24, government delegates will lay out the rules to implement the Paris Agreement, policies that will affect the lives of billions of people. Countries and industries most responsible for emitting greenhouse gases, and for obstructing and delaying progress on averting the worst effects of this crisis, must be held accountable for their actions, and should bear the greatest responsibility in paying the costs of a global, just, and equitable transition to a 100 percent fossil fuel free future.

These are the People’s Demands, our call to government delegates, grounded in people’s movements from every continent, that demand with one voice what is our birthright: climate justice.

Keep fossil fuels in the ground

1. Developed countries pledge for a just and equitable transition to 100 percent Renewable Energy by 2030.

2. Governments phase out subsidies to the fossil fuel industry and pledge to divest fully from fossil fuels by 2020.

3. Pledge to an outright and immediate ban on fracking and adopt a global moratorium on new fossil fuel exploration and extraction techniques starting in 2018.

Reject false solutions that are displacing real, people-first solutions to the climate crisis

2. Honor the international Moratorium on geoengineering established by the Convention on Biological Diversity.

6. Stop supporting and promoting burning biomass as renewable energy and reject the substitution of biofuels and bioenergy as an alternative to fossil fuels.

Advance real solutions that are just, feasible, and essential

1. Transform energy systems away from corporate-controlled fossil fuels and other harmful sources such as nuclear, mega-hydro, and biofuels to a clean, safe system that empowers people and communities.

2. Support ecological restoration to recover natural sinks, and stop all projects that are extremely destructive of Earth’s natural capacity to absorb greenhouse gases.

4. Commit to policies that embrace agro-ecological practices and food sovereignty in place of “Climate Smart Agriculture”.

6. Adopt a technology framework that recognizes the importance of endogenous and indigenous technologies and innovations in addressing climate change, and enables developing countries and communities to develop, access, and transfer environmentally sound, socially acceptable, gender responsive and equitable climate technologies.

7. Respect and enable non-corporate, community-led climate solutions that recognize the traditional knowledge, practices, wisdom, and resilience of indigenous peoples and local communities, and protect rights over their lands and territories.

8. Ensure participatory and transparent assessment of all proposed climate technologies and reject barriers to technology access and transfer such as intellectual property rights.

1. Replenish the Green Climate Fund to ratchet up climate action to stay below 1.5 degree Celsius global temperature rise, and fulfill developed countries’ commitment to provide $100 billion a year by 2020.

2. Provide adequate and real money (in addition to Overseas Development Assistance) to scale up adaptation and ensure protection to climate migrants and those impacted by climate change.

4. Commit to climate reparations to those most affected but least responsible for climate change.

End corporate interference in and capture of the climate talks

1. Advance a conflict of interest policy that protects Paris Agreement implementation and global climate policy from obstruction by Big Polluters, and mandates governments take action at the national level.

2. Prohibit industries that profit from fossil fuels and the climate crisis from influencing international and national climate policy forums.

3. Reject every attempt by corporations and their proxies to insert themselves into the negotiations.

4. Advance a call to hold corporations accountable for the impacts of decades of misinformation and political interference in climate policy.

1. Developed countries must publicly recognize and act on their greater historical responsibility for greenhouse gas emissions.

2. Ensure developed countries take ambitious action in accordance with their historical responsibility and capacity, with ambitious domestic targets (including the rapid phase out of fossil fuel extraction and dirty energy subsidies), international cooperation, and support for global climate finance and Just Transition in developing countries.

3. Drastically increase the ambition of domestic commitments and global targets to limit warming to 1.5 Celsius and ensure such commitments are set in accordance with science and equity.