The People’s Caravan From Cleveland RNC To Philadelphia DNC

Note: On Saturday, July 23rd, at 3 p.m., they will arrive at Tubman House in Sandtown, Baltimore, to meet with journalist and former political prisoner Eddie Conway, Friend of a Friend and AFSC activist Dominique Stevenson, and community members. Tubman House is a community center in an abandoned city-owned row house, steps from Gilmor Homes and where Freddie Gray was arrested. The Caravan stop in Baltimore will build with the Movement for Black Lives, honor Freddie Gray and strategize with the Black community around state violence.

Tubman House, run by the Coalition of Friends, made up of members of Friend of a Friend, Leaders of a Beautiful Struggle, and residents of Gilmor Homes, as well as other activists and artists, provides programming and services for the residents of Sandtown and Gilmor Homes.

It Takes Roots to Change the System

This is the moment: white rage, homophobia and islamophobia are growing stronger. We cannot let this moment divide us, or let the right pit us against each other. This moment calls for us to show up even stronger and more unified.

There are three major defining factors of this moment: white rage and misogyny escalated by the presidential elections; extractive dig-burn-dump economies promoted by politicians; and rising militarism at home & abroad applauded by the electorate.

We believe that no matter who becomes the next US president, these growing norms will have serious long-term implications for Black, Latin@, Arab and Muslim peoples, Indigenous Peoples,  Asian & Pacific Islander, working class White folks, women and trans people… long after the next president is elected.

We are building a diverse and interconnected movement that has the roots we need to weather the storms our communities face and change the systems that cause us harm.

This July 2016, Grassroots Global Justice Alliance (GGJ) is organizing a People’s Caravan from Cleveland to Philadelphia of 40-50 frontline community leaders from the US and Honduras. The caravan will begin in Cleveland on Thursday 7/20 at the Republican National Convention and end on Wednesday 7/27 with Justice for Berta Cáceres actions in Philadelphia during the Democratic National Convention.

This is a call to action from communities of color and white folks to confront the growing acceptance and public condoning of racism and xenophobia; from women and trans people to reclaim feminisms for the grassroots; from communities living on the frontlines of polluting industries to build a new economy; from veterans and organized communities around the globe to end U.S. military intervention.

The It Takes Roots People’s Caravan will begin in Cleveland, Ohio on the final day of the Republican National Convention, where we’ll be supporting creative actions by some of our members and allies (more details to come).

Then we hit the road to Philadelphia, making stops in Pittsburgh and Baltimore to build with organizers in the region around racial justice, environmental justice, and workers rights.

In Philadelphia as the Democratic National Convention begins, we’re organizing a creative action calling for Justice for Berta Cáceres, the indigenous Honduran movement leader of the Civic Council of Popular and Indigenous Organizations of Honduras (COPINH) who was assassinated in March of this year because of the organizing she did to defend the Lenca Indigenous Peoples’ land, rights and territory, and to protest transnational corporations and the government.

The It Takes Roots People’s Caravan will continue to support Berta’s family’s call for an independent investigation into her murder by the Inter-American Commission on Human Rights, and call on members of US congress to support HR5474, the Berta Cáceres Human Rights in Honduras Act, which would “suspend U.S. funding to the Republic of Honduras for their police and military operations, including funds for equipment and training, until the Honduran government investigates credible reports indicating the police and military are violating citizens human rights.”

In the spirit of the Honduran social movement that continues to organize to stop environmental destruction and violent persecution, at our action in Philadelphia we’ll demonstrate that Berta didn’t die, she multiplied.

We are honored to announce that two members of COPINH will be joining the caravan: Berta’s daughter Laura Yolanda Zuñiga Cáceres, and Rosalina Dominguez Madrid. 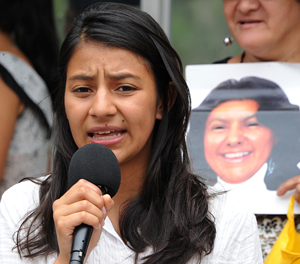 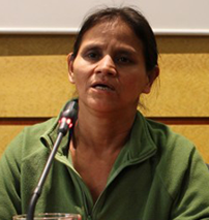