The People’s Mobilization To Stop The US War Machine, Save The Planet Begins

New York City – The People’s Mobilization to Stop the US War Machine and Save the Planet begins today. The People’s Mobe connects the issues of militarism, climate crisis, racism, and decolonization. The events are being held during the UN General Assembly because to achieve economic, racial and environmental justice as well as peace requires the United States to stop its widespread violations of international law.

On the weekend of the International Day for Peace, the People’s Mobilization declares its dedication to stopping the US War Machine and demands the US be held accountable for its destructive acts. The US government must begin to obey the UN Charter by stopping regime change operations, ending the use of unilateral coercive measures, often called sanctions, and ceasing military attacks. At a time when all of the world leaders gather, we say we’ve had enough of the US War Machine.

The People’s Mobilization also demands that the US sign the nuclear weapons ban treaty, rejoin the Iran nuclear agreement and Paris climate treaty, disband NATO and close bases and outposts around the world. We demand an immediate transition to a peace economy that uses our resources to meet human needs and protect the planet. 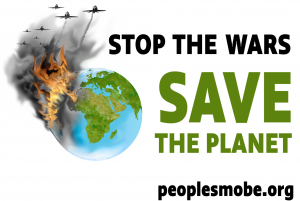 Sunday, September 22 – The People’s Mobe Rally and March starting in Herald Square at 34th St and 6th Ave at 2:00 pm. Meet Embassy Protectors, Roger Waters of Pink Floyd, Rebel Diaz and many more speakers and artists. We’ll march to the United Nations after the rally (ending at Ralph Bunch Park at 43rd St and First Ave).

This event will feature diplomatic representatives from Bolivia, Cuba, Iran, Nicaragua, Syria, Venezuela and Zimbabwe. Live music by David Rovics. Presentation of the US Peace Prize by Dr. Michael Knox. And a panel on transnational solidarity moderated by Anya Parampil of the Grayzone Project featuring Ajamu Baraka of Black Alliance for Peace, Taryn Fivek of International Action Center, Margaret Flowers of Popular Resistance, the Honorable Leon Siu of the Hawaiian Kingdom, Lorraine Liriano of a Call to Action for Puerto Rico and Glen Ford of Black Agenda Report. Opening by Kevin Zeese and Closing by Joe Lombardo.

YOU MUST REGISTER IN ADVANCE AND BRING A PHOTO ID. Bags will be checked at the door. Please do not bring much with you. No food or drink in the church. Register at bit.ly/RSVPapathtopeace. The event is free but we will accept donations to help cover the costs. The event will be covered live by WBAI 99.5 in New York City and livestreamed at https://www.facebook.com/PopularResistanceOrg/. 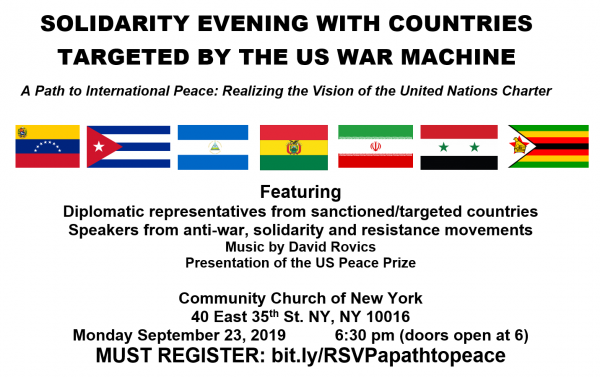 The People’s Mobe will also march in the Climate Strike on Friday, September 20 with messages connecting militarism and the climate crisis. We’ll meet in front of the Municipal Credit Union at 2 Lafayette St (near Foley Square) at noon and march to Battery Park.

On Saturday, September 21, the People’s Mobe will join the march for Puerto Rico’s independence starting at Columbus Circle at 11:00 am and marching to Dag Hammarskjold Plaza at the United Nations. In the evening, we’ll attend “Race, Militarism and Black Resistance in the ‘Americas'” at the Green Worker Cooperative, 1231 Lafayette Ave, in the Bronx starting at 5:00 pm.