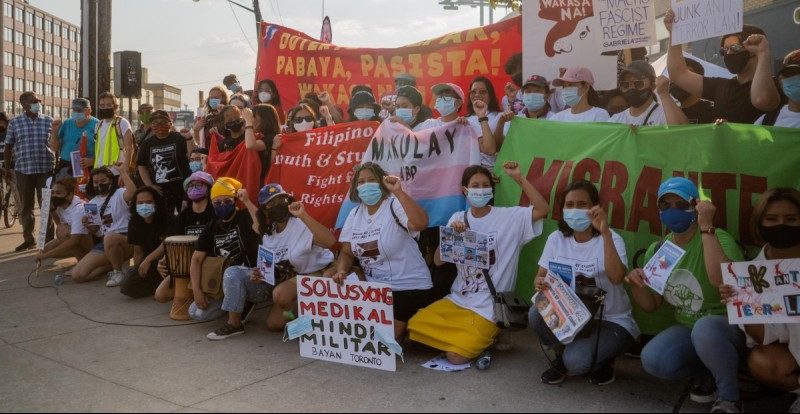 Whoever succeeds Duterte after the next election will continue to prioritize capitalist exploitation.

On July 26, President Rodrigo Duterte delivered his sixth and final State of the Nation Address (SONA) before the 2022 general election. The SONA is an annual government tradition and constitutional obligation, modeled after the American State of the Union address. It is a theatrical stage for the President of the Philippines to boast about the previous year’s so-called achievements, and preview next year’s legislative plans and executive orders, not unlike the American president’s annual State of the Union address.

Outside of Malacañang Palace, the seat of the Philippine president’s power in Manila, opposition groups, peasant workers, and unions held another annual tradition during Duterte’s speech: The People’s State of the Nation Address. The PSONA is an organized mass protest in response to the yearly spectacle to condemn continued atrocities committed by the Government of the Philippines in the service of American imperial interests. These protests are not just a recent phenomena in reaction to the crimes committed by the Duterte administration. Since the annual SONA was instituted by the United States’ 1934 Tydings-McDuffie Act that established the Philippine Commonwealth under American rule, Filipinos have come out to oppose it.

This anger and frustration extends beyond the Philippines. Human rights groups and activist organizations among the Filipino diaspora in Canada also prepared for this year’s PSONA, organizing protests and political education across the country. Groups such as BAYAN Canada, Anakbayan Canada, Migrante Canada, International Coalition for Human Rights in the Philippines, Canada-Philippine Solidarity Organizations, Malaya Canada, Canada-Philippine Solidarity for Human Rights, Gabriela British Columbia and Ontario, and the International League of People’s Struggles in Canada held demonstrations in Toronto, Montreal, Ottawa, Vancouver, and Winnipeg ahead of Duterte’s final SONA.

An occupation of Joyce-Collingwood Station in Vancouver and a march between the US and Philippine Embassies in Ottawa were just some of the actions Filipinos in Canada took for PSONA 2021. These demonstrations sought to educate Canadians on the atrocities and human rights violations committed by the Philippine government against the Filipino people, through the tacit support of the US and Canada.

Canada is not a passive onlooker to the violence and repression of the people of the Philippines, but rather an active oppressor, supplying military and police aid to Duterte’s campaigns of violence. Violence by Canadian mining companies in the Philippines continued throughout the pandemic, despite the global economic slowdown. Displaced Indigenous land defenders are targeted by the government for protesting the destruction of their homes and the environment by Canadian mining companies, and are often murdered in police operations or by extrajudicial killings sanctioned by the Duterte administration.

While the Philippines has been one of the top source countries of migration to Canada for decades, and most Canadians have likely benefited from the work of Filipino nurses, Personal Support Workers, live-in caregivers, nannies, food service and factory workers, most are still unaware of the impoverished and desperate state of affairs that this labour rests on. Canada is still deporting Filipino workers, who have worked to save lives on the frontlines of this pandemic, because their dehumanization under capitalism has rendered them expendable. This year’s PSONA protests sought to demonstrate to Canadians, who are largely unaware of the workers their economic prosperity stands on, that Filipinos continue to struggle globally. The struggle does not just end with Duterte’s presidency—without solidarity against the imperial forces standing in the way of national democracy in the Philippines, Filipinos dispersed around the world will continue to suffer under capitalism.

The end of a regime?

Duterte’s antagonism towards certain sections of the Philippine elite throughout his administration earned him international headlines, however, this does not make him an ally of the working class. The violence he has unleashed on Filipinos through his so-called “War on Drugs” over his one-time, 6 year term as president was only a thinly disguised “War on the Poor” in the service of other factions of the ruling elite and global capital.

Duterte’s response to the COVID-19 pandemic has been a disaster, favouring policing, intimidation, and other forms of violent population control in attempts to halt the spread of the virus. Mass COVID-19 testing has not been handled as a national government initiative, nor has streamlined contact tracing. The healthcare system has been stressed beyond capacity, and the deportation of frontline healthcare workers by Canada back to the Philippines. Dying Filipinos are being turned away from hospitals. As of July 26, only 10 percent of the population of the Philippines has been vaccinated. Instead of fighting international trade laws for access to vaccines, the Duterte government has chosen to blame vaccine hesitancy, threatening jail or injection with anti-parasite drugs for animals for those that decline COVID-19 vaccines that simply do not exist. Again, the hallmark of the Duterte regime has been to threaten violence on those without resources, instead of providing them to the impoverished masses.

Duterte’s war on the poor will continue outside the term limits of his presidency. In his 2021 SONA, he applauded the creation and implementation of the National Task Force to End Local Communist Armed Conflict (NTF-ELCAC). The NTF-ELCAC initiative, which has resulted in the extreme McCarthy-esque “red-tagging” of anyone accused of having anti-government sympathies, has been the subject of widespread criticism. Legislated violence against opposition has also been a signature of the Duterte regime, alongside the so-called “Terror Law” and Executive Order No. 70 which orders all-out repression and complete censorship of political dissent that from activists, human rights defenders, labour unions, Indigenous Peoples, and peasant and worker groups, among other opposition to continued violence.

Duterte’s celebration of red-tagging during his 2021 SONA on July 26 occurred on the same day as Hidilyn Diaz won the Philippines’ first gold medal ever at the Olympics. Diaz was red-tagged in 2019 and could have faced government-sanctioned reprisals just for the mere association with government opposition before attempts were made to clear her name.

The last year of Rodrigo Duterte’s presidency has also seen the extrajudicial killings of red-tagged activists ramp up across the Philippines. At the end of 2020, 9 Tumanduk Indigenous leaders were executed in police raids on the island of Panay. In March 2021, massacres and mass arrests of red-tagged farmers, Indigenous land defenders, and human rights activists occurred in a “Bloody Sunday” in the Southern Tagalog region. The NTF-ELCAC and Terror Law were never meant to fight armed insurgents, some of whom Duterte had “befriended” in the past, but to legitimize state terror against the most vulnerable of Philippine society.

Duterte’s presidency was “successful” in terrorizing the people of the Philippines and in keeping them impoverished in the service of capitalism. The country is now suffering through one of its worst economic downturns in history due to the poor pandemic response, mass unemployment, and lack of economic relief. Duterte proposed one economic solution during his final SONA: increase the exploitation of Filipinos by global capital even further. Whoever succeeds Duterte after the next election will continue to prioritize capitalist exploitation and will have the legal means to continue a war of terror against any opposition.

Indeed, the increasing material contradiction between the people and the government reveals where Duterte’s real interests lie. The Philippine government can try to mask the poverty and suffering of the people by listing so-called “economic and political success stories” during the pageantry of state rituals, but it is always difficult to hide the people’s marches on Manila highways, and solidarity demonstrations held around the world, demanding change. The Wakasan Na (End Now) movement was launched in early June 2021 in response to the announcement that Duterte has considered running for Vice President in the 2022 election, with his daughter, Sara Duterte, as presidential running-mate. “Six years is enough,” has been a rallying cry for many of these groups.

Another “People Power Revolution,” this time led by the people and not the Philippines’ dynastic elite, is sorely needed. The Filipino people are aware that a better world is possible for them—perhaps even necessary—and they will fight for it.

BAYAN Canada is an overseas chapter of Bagong Alyansang Makabayan (New Patriotic Alliance). BAYAN is an alliance of organizations of Filipino migrant workers, women and youth, indigenous people, church people, healthcare workers and professionals committed to advancing the cause of genuine national independence, people’s democracy and a just and lasting peace in the Philippines. BAYAN Canada calls on all patriotic Filipino organizations in Canada to join in advancing the Filipino people’s movement for national liberation and democracy.