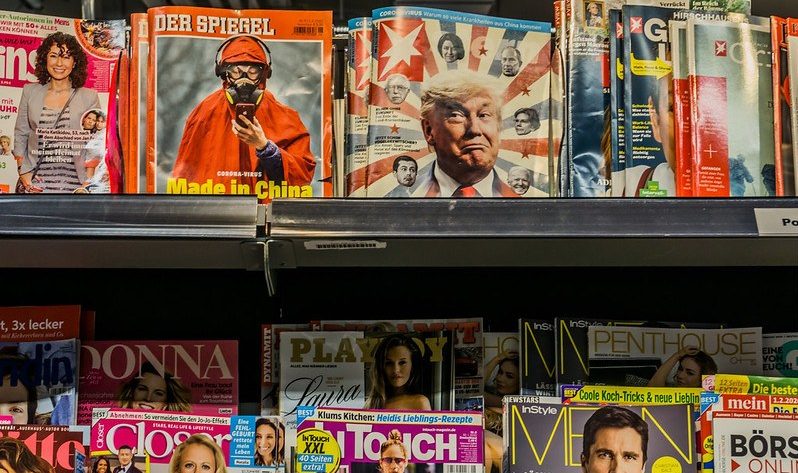 The Plot To Blame China For COVID-19

Above photo: photoheuristic.info – CC BY 2.0.

The Trump lot—Steve Bannon, Peter Navarro, Mike Pompeo—and their media cheerleaders are as fanatically anti-China as the Biden crew is anti-Russia. Just like George W. Bush’s WMD lies in the early-2000s, there is a developing timeline of Trumpian efforts to bend intelligence on COVID to the administration’s anti-China policy.

In the 1980s, the US succeeded in pushing China’s elites to adopt neoliberal market “reforms,” many of which continue to the present. The World Bank hailed China as a “success” story in foreign direct investment, which it says contributed to China’s manufacturing and thus part of its 10 percent GDP growth between most of 1980 to 2010. It was not so successful for the hundreds of millions of Chinese who haven’t breathable air, drinkable water, or health insurance. But that’s another story. China became the “workshop of the world,” assembling parts for wealthier consumers in the US and Europe—until it outsourced that labor to poorer Asian countries. But this exploitation of Chinese labor had the consequence of increasing China’s GDP and its thus power on the world stage. This is known as the “globalization paradox.”

To make sure that China continues to benefit US corporations without getting too big for its boots, the US is relying on the doctrine of “Full Spectrum Dominance”: hypersonic drones, modified stealth bombers, cyberwar, the Space Force, etc., with which to threaten China.

In 2000, an organization to which future-US President George W. Bush belonged, the Project for the New American Century, said that after the US gained “a substantial force presence in the Gulf,” it would take on China: “Raising U.S. military strength in East Asia is the key to coping with the rise of China to great-power status. For this to proceed peacefully, U.S. armed forces must retain their military preeminence and thereby reassure our regional allies.”

But Bush was busy murdering Afghans, Iraqis, Pakistanis, Somalis, and Yemenis as part of the “war on terror.” So, Obama ran with the China ball, announcing a “pivot” to Asia in 2011. In an obvious threat to neighboring China, Japan was pressured to drop the peace clause of constitution, which the US had cynically imposed after nuking Japan in 1945. New US weapons systems were placed in South Korea and the X-37B space weapon (which the US military assured us was not a weapon) was launched, reportedly over the Strait of Taiwan. Then-US Defense Secretary Leon Panetta said that by 2020, he hoped that 60 percent of US ships would be in the South China Sea. The failed Trans-Pacific Partnership deal was an effort to force China’s neighbors to trade and invest on US-dominated regional terms.

But, for the Trump cabal, none of this went far enough. The COVID-19 crisis has given the administration an opportunity to ramp up the anti-China narrative.

A now-deleted statement by the Wuhan Institute of Virology confirms that in early-2018, US officials visited the facility. “The Institute has established close cooperation with a number of well-known U.S. organizations including the National Science Foundation, the EcoHealth Alliance, University of Texas Medical Branch, and the Galveston National Laboratory, and has achieved a series of academic exchanges.” No US concerns about the safety of the lab were made public at the time, including in the press release. But, as we shall see, now we are being told that concerns were raised in private and that the virus escaped from the lab.

In April 2020, MSM subtly started seeding their articles with propaganda. On April 6th, CNN’s Robert Kuznia and Drew Griffin quoted Rutgers University’s Dr. Richard Ebright: “The possibility that the virus entered humans through a laboratory accident cannot and should not be dismissed.”

On April 14th, the Washington Post’s Josh Rogin, a well-known “security” talking head on MSM, was given alleged US Embassy cables dating back to early-2018, purporting to highlight US concerns over safety at the Wuhan Institute of Virology (WIV). One of the cables read: “During interactions with scientists at the WIV …, they noted the new lab has a serious shortage of appropriately trained technicians and investigators needed to safely operate this high-containment laboratory.” Rogin quotes an unnamed US official: “The cable was a warning shot … They were begging people to pay attention to what was going on.”

Citing his Washington Post colleague David Ignatius’s opinion, that the Chinese government’s official story of the virus emerging from a seafood market is “shaky,” Rogin again quotes the unnamed official: “The idea that [it] was just a totally natural occurrence is circumstantial. The evidence it leaked from the lab is circumstantial. Right now, the ledger on the side of it leaking from the lab is packed with bullet points and there’s almost nothing on the other side (sic).” Rogin writes: “There are similar concerns about the nearby Wuhan Center for Disease Control and Prevention lab, which operates at biosecurity level 2, a level significantly less secure than the level-4 standard claimed by the Wuhan Insititute of Virology lab.”

The Washington Post’s claims were echoed by other MSM. On April 16th, CNN Politics reported: “An intelligence official familiar with the government analysis said a theory US intelligence officials are investigating is that the virus originated in a laboratory in Wuhan, China, and was accidentally released to the public.”

These agencies need little pressuring in order to lie, yet the fanatically anti-China Trump administration is piling on demands to link the virus to the Wuhan labs.

On April 29th, NBC reported that, like the “war on terror”-era Bush administration in its zeal to link Iraq to 9/11, the Trump administration has been leaning on intelligence agencies. Organizations including the CIA, Defense Intelligence Agency, National Center for Medical Intelligence, and the National Security Agency were ordered by the White House “to comb through communications intercepts, human source reporting, satellite imagery and other data to establish whether China and the World Health Organization initially hid what they knew about the emerging coronavirus pandemic.”

The NYT also reported that Pompeo, “the administration’s most vocal hard-liner on China, has taken the lead in pushing American intelligence agencies for more information, according to current and former officials.”

The next day (April 30th) at 0916 EDT, the Intelligence Community (IC) issued an unusual press release: “The IC will continue to rigorously examine emerging information and intelligence to determine whether the outbreak began through contact with infected animals or if it was the result of an accident at a laboratory in Wuhan.” By 1141 EDT, media were reporting on the press release.

The timing is important because the anti-Trump MSM are giving the impression that Trump is contradicting the intelligence agencies, when in fact said agencies are sending out signals to their media propagandists to report the virus as potentially originating from a lab.

Later that day at 1625 EDT, Trump told reporters: “You’ve heard three or four different concepts as to how it came out. We should have the answer to that in the not-too-distant future, and that will determine a lot how I feel about China.” A reporter later asked: “have you seen anything at this point that gives you a high degree of confidence that the Wuhan Institute of Virology was the origin of this virus?” Trump replied: “Yes, I have. Yes, I have.”

Another reporter asked: “are you suggesting that maybe you have some evidence that this was not a naturally occurring virus?” Trump replied: “No, we’re going to see where it is. We’re going to see where it comes from. And you know — look, you know every theory, whether you had the theory from the lab, you had the theory from many different — the bats, and the type of bat, and the bat is 40 miles away, so it couldn’t have been here and it couldn’t have been there.” A reporter asked: “what gives you a high degree of confidence that this originated from the Wuhan Institute of Virology?” Trump replied: “I can’t tell you that. I’m not allowed to tell you that.”

Trump’s anti-China rhetoric and actions, including crossing out the prefix “Corona” and replacing it with “China,” are part of a continuation of US empire building that began long before Trump seized power in the Electoral College coup of 2016. The main difference is that where the MSM cheered on Obama’s dangerous and reckless provocations, the majority (with the notable exception of Fox News) are critical of Trump’s methods, though not the ultimate goal of making the Yellow Dragon choke at Uncle Sam’s feet.

T. J. Coles is director of the Plymouth Institute for Peace Research and the author of several books, including Voices for Peace (with Noam Chomsky and others) and  Fire and Fury: How the US Isolates North Korea, Encircles China and Risks Nuclear War in Asia (both Clairview Books).