The Plot To Overthrow Venezuela

Note: Margaret Flowers and Kevin Zeese interviewed Dan Kovalik on the Popular Resistance podcast, Clearing the FOG. You can listen to it here: How Many Coups (And Lives) Will It Take Before The US Surrenders In Venezuela?

In the interview we examine how since the election of Hugo Chavez in 1998, the US and its allies have used everything they have to overthrow him and the current president, Nicolas Maduro. The Venezuelan people have resisted, despite great suffering being inflicted on them, and US coups have failed. We spoke with Dan Kovalik about his newest book, “The Plot to Overthrow Venezuela” and the tremendous resistance of the Venezuelan people.  Below, John Rachel reviews Kovalik’s book. KZ

In one concise statement, Dan Kovalik sums up the criminal — if self-serving and for now effective — the foreign policy of the U.S. across the planet:

“The US appears to be intentionally spreading chaos throughout strategic portions of the world, leaving virtually no independent state standing to protect their resources, especially oil, from Western exploitation. And, this goal is being achieved with resounding success, while also achieving the subsidiary goal of enriching the behemoth military-industrial complex.” 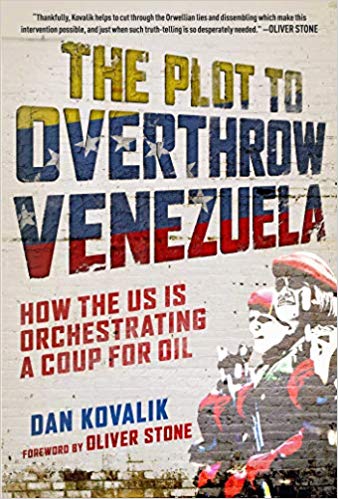 A divided Korea, a decimated Vietnam, endless war in Afghanistan, a barely functional Iraq, a destroyed Libya, ongoing destruction of Syria and Venezuela, relentless attacks and incipient war on Iran, give us more than a glimpse into the awesome power of America’s military might, its malice and ruthlessness in projecting that power, its no-holds-barred no-moral-qualms no-body-count no-questions-asked ends-justify-the-means tactical use of genocide, its jaw-dropping hypocrisy in portraying itself as a force of good, its psychopathic exceptionalist world view which judges all other nations and their populations as dispensable, and its ultimate loyalty to a tiny autocratic ruling elite who use “democracy” as just another tool in their bag of tricks to promote absolute corporate tyranny — the framework of fascism Sheldon Wolin calls inverted totalitarianism — and global hegemony. It’s for good reason that the U.S. is now often referred to as the Empire of Chaos.

The Plot to Overthrow Venezuela: How the US is Orchestrating a Coup for Oil, as the title suggests, more specifically focuses on the horrors inflicted by the U.S. government on Venezuela. This thorough, extremely well-researched, and fully supported exposé covers the current crises in and about Venezuela, intentionally and purposefully instigated by the U.S. to overthrow its current government and plunder the country’s rich oil reserves. Just as importantly it offers rich and revealing historical accounts of America’s past dealings with Venezuela and almost identical scenarios with other Latin American nations, detailing the darkness and corruption that lies at the heart of U.S. foreign policy, and how that has cast a pall of oppression over the entirety of South and Central America, the nations of which have the geographical misfortune of being in America’s self-declared hemisphere of influence — read that as hemisphere of total domination and ruthless exploitation. From Chile to Haiti to Panama to Honduras to Nicaragua to El Salvador to Colombia, we see the brutal deployment of U.S. political and military assets leaving whole countries impoverished, the poor without hope — often deprived of even food and water — and piles of nameless corpses in escalating numbers, dismissed by the U.S. government and its lapdog media as collateral damage of the Great Imperial Project.

By the end of Kovalik’s chilling indictment of U.S. malfeasance in its war on the people of Venezuela, what is astonishing and shocking is that the U.S. is again getting away with such overt and illegal aggression, by not only using the same playbook but by using the same players. With Mike Pompeo as Secretary of State, John Bolton as National Security Advisor, and Elliot Abrams as Special Envoy to Venezuela, at the helm of the project to take Venezuela’s government apart and replace it with the puppet regime of the unelected Juan Guaido, we have three of the most notorious of the notorious — murderous, lying thugs — doing the dirty work. All three have sordid histories of inciting war and orchestrating regime changes. Abrams was indicted and convicted for lying to Congress about the Iran-Contra affair.

The thought-provoking Plot to Overthrow Venezuela is very well-written, with clarity, accessibility, and erudition which puts it in a class with the best works of Noam Chomsky. The Forward by Oliver Stone is a worthy and deserving way to get things started. I give it six out of five stars, truly one of the most engaging and informative books I’ve read in ages.