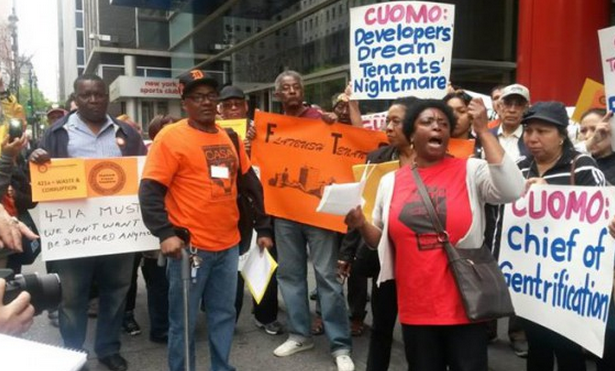 The Power Of Persistence In NYC’s Fight For Affordable Housing

The crowd of tenants was growing raucous in Cooper Union’s Great Hall in lower Manhattan on June 29. On stage, a long table awaited members of New York City’s Rent Guidelines Board, or RGB, which had been set to vote on rent adjustments for rent-stabilized apartments an hour earlier. The tenants — many of whom were donning matching shirts and waving signs calling for a rent rollback — seemed unconcerned with the delay, filling the time with chants in English and Spanish. One stood out as particularly accurate: “Cuomo betrayed us! The RGB can save us!”

Thanks to the 1971 Urstadt Law, New York State, rather than New York City, controls the city’s rent laws, which expired on June 15. These laws include vacancy decontrol, which allows rent-stabilized apartments to be destabilized once they are vacant and the rent reaches a certain threshold. However, the city does have one means of managing its rent-stabilized apartments: the RGB, which votes on yearly rent increases for stabilized apartments. This year’s vote was scheduled for late-June. The combination of the rent laws expiring and the RGB vote resulted in a period of heightened mobilization for tenant organizations and provided an opportunity for them to come together to pressure both the city and the state in two separate but related struggles.

By the end of the day on June 15, there was no agreement on a rent-law renewal plan in Albany, the state’s capital. The laws expired at midnight, impacting more than one million rent-stabilized apartments throughout the city. Three days later, on June 18, Gov. Andrew Cuomo announced a five-day extension of the rent regulations to give state legislators more time to agree on a deal. They reached a tentative agreement at the end of the five days and it became law on June 25. The final package, nicknamed “the Big Ugly” by tenant advocates, extends the rent laws for four years with only minor reforms, including an increase from $2,500 to $2,700 as the vacancy decontrol threshold. Tenant groups had called for eliminating the program altogether because it gradually diminishes the city’s stock of rent-stabilized apartments, with the RGB’s yearly rent increases allowing them to reach that threshold and jump to market-rate rents.

For months leading up to the June 15 deadline, a handful of tenant organizations had worked in a coalition called the Alliance for Tenant Power, which regularly sent busloads of tenants to Albany to pressure Cuomo and other legislators to strengthen the laws instead of simply renewing them. As the deadline to do so approached and then passed, the coalition escalated to civil disobedience and direct action, holding sit-ins and getting arrested en masse in front of the governor’s office.

Tenants at risk of losing their homes due to weak rent laws set up camp outside of Governor Andrew Cuomo’s office in Albany. (Facebook / Alliance for Tenant Power)

Hours after Cuomo and the state legislature allowed the rent laws to expire at midnight on June 16, tenant groups gathered in front of the Brooklyn Academy of Music, where real estate developers were convening for a conference. Facing a crowd of about 25 demonstrators, Esteban Girón of the Crown Heights Tenant Union — a union of tenant associations in Brooklyn that belongs to the Alliance for Tenant Power — explained the new situation by saying, “We are no longer fighting for stronger rent laws. We’re fighting for rent laws at all.”

Two days later, tenants shifted their focus to the Rent Guidelines Board vote and amassed at Brooklyn Borough Hall for an RGB public testimony. In the lead-up to the vote on rent adjustments for stabilized apartments, the RGB held public testimonies in every borough to give tenants and landlords an opportunity to share their stories and opinions. But this was June 18 — three days after the rent regulation laws had expired in Albany, and hours before the five-day extension was announced. When the RGB chair opened the meeting, she noted its “unusual circumstances” — essentially, people were there to discuss rent-stabilized apartments, but rent-stabilized apartments did not exist. Still, the meeting continued under the assumption that the state legislature would get its act together and reinstate the laws. For the next couple hours, tenants packed the room and its adjacent hallway. At one point, reports of people being turned away because of fire codes temporarily halted the proceedings. Those who actually made it inside the hearing faced an animated crowd anxious to have its voice heard. Skepticism and heckling met landlords who spoke of rising operating costs; cheers erupted when tenants argued for the first-ever rent rollback.

The RGB vote was originally set for June 24, but was rescheduled for June 29 due to the delay with renewing the rent laws in Albany. Nevertheless, on June 24, tenants gathered outside of Cooper Union, where that raucous meeting would eventually take place five days later. About a hundred people showed up to the picket, representing many Manhattan-based tenant groups — including Metropolitan Council on Housing, the Committee Against Anti-Asian Violence, or CAAAV, and Good Old Lower East Side. These groups were part of another coalition, Real Rent Reform, which was also working to strengthen rent laws.

“Our strategy has been primarily informing residents and tenants,” explained Naved Husain, lead organizer for CAAAV. The group focused on talking to its member base and getting individuals, in turn, to talk to their neighbors and friends about the impact of the Rent Guidelines Board decision. The key was making people realize that the results of the RGB’s vote would tangibly impact their ability to pay rent and, by extension, remain in their homes and neighborhoods.

When the RGB finally voted on rent adjustments at that June 29 meeting, it failed to make history with the first-ever rent rollback, but it did so in another way: by creating the first rent freeze for one-year leases in its 46-year history. Two-year leases will be increased by 2 percent — also an historic low. Taking into account operating costs for owners and the financial situation facing tenants, particularly their average rent-to-income ratio, the board voted 7-2 in favor of the rent freeze. The cheers of the tenants in the audience, many already on their feet, drowned out the sound of the final votes. With no rent increase for stabilized apartments with one-year leases, rents will be that much slower to reach the new vacancy decontrol threshold of $2,700, preserving — at least for now — some rent-regulated housing in New York City.

For the many tenant organizations that mobilized supporters to speak at public testimonies, held protests and events almost daily, and formed coalitions to present a united front at this crucial moment, the RGB’s decision was proof of their organizing strength. “For a lot of Asian low-income communities, their voices are never really heard,” Husain explained. “So we feel that we were able to bring the voice of low-income Asian immigrants and refugees to a space where these communities, which are affected by the same laws as anybody else, don’t have any input.”

With the hectic weeks of the rent law expiration and the RGB vote now behind them, tenant organizations are looking to channel the momentum into campaigns against predatory landlords and gentrification, among other issues, while continuing to work in coalitions that broaden their movement and multiply their capacity. A few days after the RGB vote, Esteban Girón of the Crown Heights Tenant Union reflected on the successful organizing effort around the rent freeze before noting his disappointment with the rent law fight in Albany. “We definitely feel like we lost the rent battle,” he said, noting that the laws were only barely strengthened to protect tenants. “But even with this defeat of the rent laws, the tenant movement itself is stronger and more united than it’s ever been.”

Despite the passage of the “Big Ugly” rent law extension, organizers are harnessing the energy of the RGB’s rent-freeze vote and not letting up on those who control the city’s stock of rent-stabilized housing. This fighting spirit may best be summed up in Girón’s message to Cuomo, upon traveling to the governor’s hometown to protest the rent law extension: “You can apologize all you want, but you lied to us. And tenants don’t forget.”