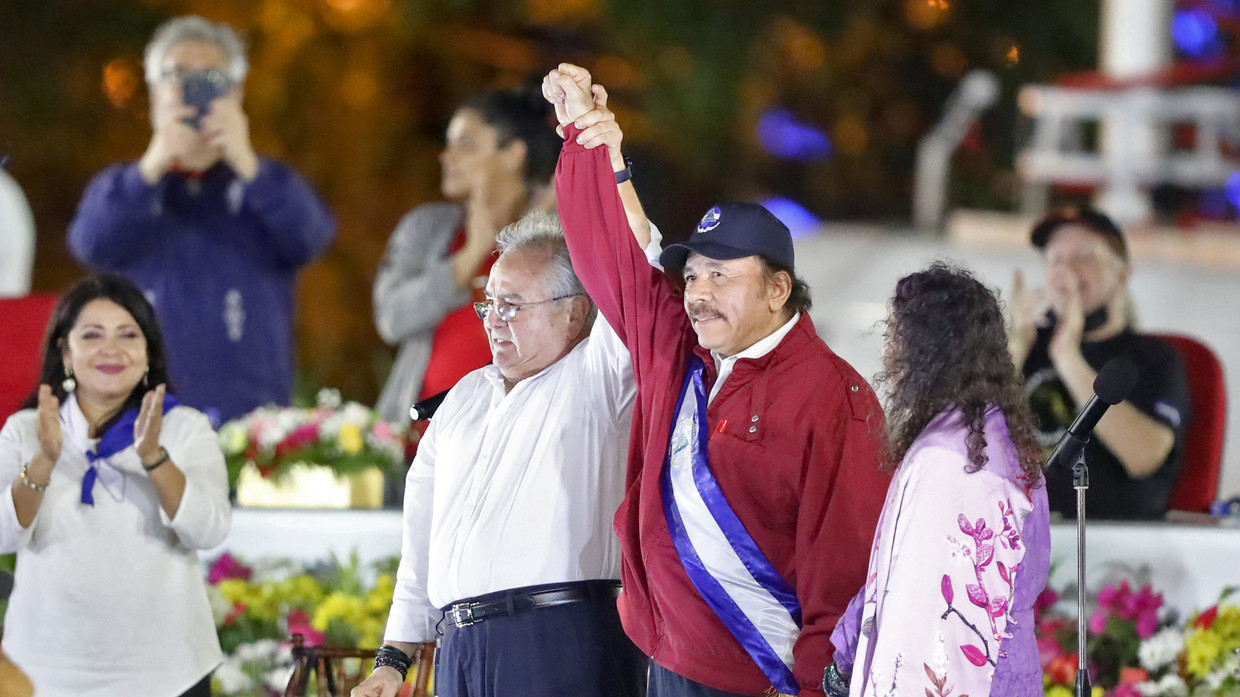 Above Photo: The president of the Nicaraguan National Assembly, Gustavo Porras (L), raising the hand of Nicaraguan President Daniel Ortega (C) as he is sworn in as president for a fourth straight term during the inauguration ceremony in Managua on January 10, 2022. Zurimar CAMPOS / Venezuelan Presidency / AFP.

I’ve just attended the latest inauguration of Sandinista leader Daniel Ortega as Nicaraguan president and found him in a bullish mood, relishing his country’s improved ties with China and critical of American hypocrisy.

Since 1987, I have been coming to Nicaragua to show solidarity for its upstart band of merry men and women known as the Sandinistas. They, of course, led the unlikely successful revolution against the US-backed dictatorship of the Somoza family – a regime installed in 1934 and backed to the bitter end until finally overthrown in 1979.

Tens of thousands of Nicaraguans were killed by Anastasio Somoza as he attempted to cling to power by gunning down his own people and bombing towns by air. And still the Sandinistas triumphed, led by Ortega.

The US, which has been intervening in Nicaragua for more than a century, never accepted the Sandinista revolution and its leader. It has never abandoned the idea of the Monroe Doctrine announced in 1823 – a statement which declared the US claims sole dominion over the Western hemisphere, and, under the Roosevelt Corollary, reserves the right to intervene in any country in the Americas to maintain this domination and prevent nations from other parts of the world from asserting any influence of their own.

Ortega and the Sandinistas, who dared to overthrow a US-backed dictatorship and choose their own allies to defend their revolution – such as Cuba, the USSR and other Warsaw Pact states – represent a direct threat to the Monroe Doctrine. And now Ortega, who has been in office since 2007 and was re-elected again as president in a landslide victory in November, has thrown down another gauntlet to challenge American domination – namely through his formal recognition of the People’s Republic of China (PRC) and the restoration of diplomatic relations for the first time since 1990, when Ortega lost a re-election bid to Violeta Chamorro.

One of the biggest fears of the US, and one of the greatest threats to the viability of the antiquated Monroe Doctrine, is that Ortega will partner with China to build a major shipping canal which would link Nicaragua’s Pacific and Atlantic coasts. The US has coveted such a canal, and its own ability to control and profit from it, since the 19th century. This is because such a canal, which would be built through an enormous lake that lies between Nicaragua’s coasts, could accommodate ships larger than those which can navigate the Panama Canal – which is now becoming obsolete – and even allow for two to travel through in both directions at the same time.

Indeed, according to the US State Department itself, it was the attempt of Nicaragua’s Liberal party president, Jose Zelaya, to partner with Japan in building such a canal which led to the first of many US Marine invasions of Nicaragua in 1911.

The US Marines, ultimately repelled by the famed guerilla leader Augusto Cesar Sandino, ultimately left Nicaragua for good only after the Somoza dictatorship was installed in 1934. It is no wonder, then, that Ortega’s recognition of China, the presence of Chinese dignitaries at his inauguration and the announcement that Nicaragua is willing to sign up to China’s Belt and Road Initiative sent a tremor throughout Washington.

I had the honor of being invited to Nicaragua to attend the inauguration in Managua’s Plaza de la Revolucion, where a huge banner draped on the historic church reads, “All With Love, All For Love.” As I have observed over the years, Ortega often talks about love in his speeches and slogans. This is not something I hear from politicians in the US, a place where love and compassion are rarely on the menu for the electorate. The slogan of the inauguration itself was “Somos Pueblo Presidente” (“The People are The President”), and to emphasize this democratic notion, all the Nicaraguans in attendance held up their hand to take the oath of office along with Ortega.

Meanwhile, on the morning of the inauguration, both the EU and the US announced new rounds of sanctions against Nicaragua. As per usual, this was done based upon feigned concerns about democracy in the country. This ignores the fact that there was no democracy in Nicaragua until the Sandinistas overthrew the dictatorship in 1979 and then held Nicaragua’s first free and fair elections in 1984. It also ignores the fact that Ortega and the Sandinistas peacefully stepped down in 1990 after holding elections then.

Ortega had more to say about democracy at the inauguration, referring to events in Washington on January 6 last year, when hundreds of Americans stormed the US Capitol to protest what they – and millions of others – perceived as a fraudulent presidential election. He pointed out that many of these individuals have been arrested and given long sentences for what could be viewed as political actions – that is, they could be viewed as political prisoners. And yet, no country is seriously talking about sanctioning the US because of this.

Whatever one thinks of the events of January 6, it is important to note that the Nicaraguan government has been criticized, and indeed sanctioned, for prosecuting individuals who participated in and/or instigated a much more violent and deadly uprising in Nicaragua in 2018 – which was allegedly funded by the US and claimed the lives of well over 160 individuals. The differing treatment of these two situations is not lost on Nicaragua and other victims of the US’s claimed interest in defending democracy and human rights.

Regarding the US sponsorship of violence against Nicaragua, Ortega also spent considerable time at his inauguration discussing the US-backed Contra War of the 1980s which claimed the lives of around 30,000 Nicaraguans – an astronomical number for a country with a population that didn’t even reach three million at the time.

Indeed, Ortega started his speech by detailing the sufferingof a woman present at the inauguration – Brenda Rocha, the head of Nicaragua’s electoral council – who lost her arm to the contras at the age of 15, and who is now being sanctioned by the United States.  He emphasized that this was part and parcel of the US aggression against Nicaragua over the years, and also Venezuela and Cuba – two countries represented at the inauguration by their presidents.

He also had more to say about the US’s crocodile tears on human rights, referring to the case of S. Brian Willson, who was another honored guest. Vietnam veteran turned peace activist Willson lost his legs in 1987 after sitting down on a train track in California in an attempt to protest against and block arms shipments to the death squads of El Salvador.

With S Brian Willson has given so much to Nicaragua and the Revolution. ❤️🖤 pic.twitter.com/nwewfLLMdQ

Willson was run over by a train, but it turned out that it was no mere accident; the conductor was ordered not to stop for him as he normally would do for pedestrians crossing the tracks. Ortega again rightly questioned the human rights bona fides of a nation which would allow such an atrocity to happen.

In short, Ortega, and the Nicaraguan people who were there cheering him on, remain defiant against US bullying and aggression. And, with ties with China restored, they now have the help they need to effectively defend themselves. This is quite a rebuke to those American leaders who believe that the US dominion over the world is unassailable.

Republican strategist Karl Rove famously bragged about the US, “We’re an empire now, and when we act, we create our own reality. And while you’re studying that reality – judiciously, as you will – we’ll act again, creating other new realities, which you can study too, and that’s how things will sort out.” The upstart Ortega, however, has demonstrated through his continued victories, and through his forming of new alliances with countries like China, that times have changed; that it is now the US, with its crumbling empire, which must watch on the sidelines as countries like tiny Nicaragua chart their own futures and create their own realities.

For those of us who instinctively root for David over Goliath, this will be a treat to witness.