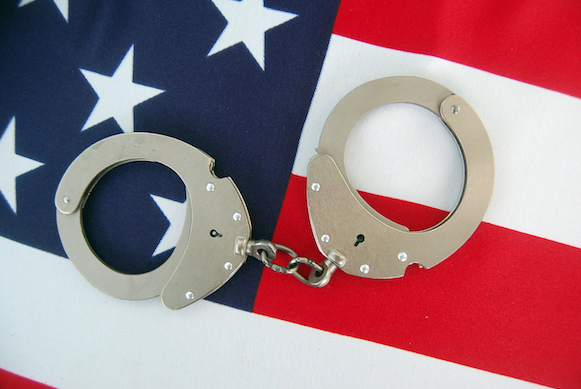 The Prison State Of America

Prisons employ and exploit the ideal worker. Prisoners do not receive benefits or pensions. They are not paid overtime. They are forbidden to organize and strike. They must show up on time. They are not paid for sick days or granted vacations. They cannot formally complain about working conditions or safety hazards. If they are disobedient, or attempt to protest their pitiful wages, they lose their jobs and can be sent to isolation cells. The roughly 1 million prisoners who work for corporations and government industries in the American prison system are models for what the corporate state expects us all to become. And corporations have no intention of permitting prison reforms that would reduce the size of their bonded workforce. In fact, they are seeking to replicate these conditions throughout the society.

States, in the name of austerity, have stopped providing prisoners with essential items including shoes, extra blankets and even toilet paper, while starting to charge them for electricity and room and board. Most prisoners and the families that struggle to support them are chronically short of money. Prisons are company towns. Scrip, rather than money, was once paid to coal miners, and it could be used only at the company store. Prisoners are in a similar condition. When they go broke—and being broke is a frequent occurrence in prison—prisoners must take out prison loans to pay for medications, legal and medical fees and basic commissary items such as soap and deodorant. Debt peonage inside prison is as prevalent as it is outside prison.

States impose an array of fees on prisoners. For example, there is a 10 percent charge imposed by New Jersey on every commissary purchase. Stamps have a 10 percent surcharge. Prisoners must pay the state for a 15-minute deathbed visit to an immediate family member or a 15-minute visit to a funeral home to view the deceased. New Jersey, like most other states, forces a prisoner to reimburse the system for overtime wages paid to the two guards who accompany him or her, plus mileage cost. The charge can be as high as $945.04. It can take years to pay off a visit with a dying father or mother.

Fines, often in the thousands of dollars, are assessed against many prisoners when they are sentenced. There are 22 fines that can be imposed in New Jersey, including the Violent Crime Compensation Assessment (VCCB), the Law Enforcement Officers Training & Equipment Fund (LEOT) and Extradition Costs (EXTRA). The state takes a percentage each month out of prison pay to pay down the fines, a process that can take decades. If a prisoner who is fined $10,000 at sentencing must rely solely on a prison salary he or she will owe about $4,000 after making payments for 25 years. Prisoners can leave prison in debt to the state. And if they cannot continue to make regular payments—difficult because of high unemployment—they are sent back to prison. High recidivism is part of the design.

Corporations have privatized most of the prison functions once handled by governments. They run prison commissaries and, since the prisoners have nowhere else to shop, often jack up prices by as much as 100 percent. Corporations have taken over the phone systems and charge exorbitant fees to prisoners and their families. They grossly overcharge for money transfers from families to prisoners. And these corporations, some of the nation’s largest, pay little more than a dollar a day to prison laborers who work in for-profit prison industries. Food and merchandise vendors, construction companies, laundry services, uniforms companies, prison equipment vendors, cafeteria services, manufacturers of pepper spray, body armor and the array of medieval instruments used for the physical control of prisoners, and a host of other contractors feed like jackals off prisons. Prisons, in America, are a hugely profitable business.

Our prison-industrial complex, which holds 2.3 million prisoners, or 25 percent of the world’s prison population, makes money by keeping prisons full. It demands bodies, regardless of color, gender or ethnicity. As the system drains the pool of black bodies, it has begun to incarcerate others. Women—the fastest-growing segment of the prison population—are swelling prisons, as are poor whites in general, Hispanics and immigrants. Prisons are no longer a black-white issue. Prisons are a grotesque manifestation of corporate capitalism. Slavery is legal in prisons under the 13th Amendment of the U.S. Constitution. It reads: “Neither slavery nor involuntary servitude, except as punishment for crime whereof the party shall have been duly convicted, shall exist within the United States. …” And the massive U.S. prison industry functions like the forced labor camps that have existed in all totalitarian states.

Corporate investors, who have poured billions into the business of mass incarceration, expect long-term returns. And they will get them. It is their lobbyists who write the draconian laws that demand absurdly long sentences, deny paroles, determine immigrant detention laws and impose minimum-sentence and three-strikes-out laws (mandating life sentences after three felony convictions). The politicians and the courts, subservient to corporate power, can be counted on to protect corporate interests.

Corrections Corporation of America (CCA), the largest owner of for-profit prisons and immigration detention facilities in the country, had revenues of $1.7 billion in 2013 and profits of $300 million. CCA holds an average of 81,384 inmates in its facilities on any one day. Aramark Holdings Corp., a Philadelphia-based company that contracts through Aramark Correctional Services to provide food to 600 correctional institutions across the United States, was acquired in 2007 for $8.3 billion by investors that included Goldman Sachs.

The three top for-profit prison corporations spent an estimated $45 million over a recent 10-year period for lobbying that is keeping the prison business flush. The resource center In the Public Interest documented in its report “Criminal: How Lockup Quotas and ‘Low-Crime Taxes’ Guarantee Profits for Private Prison Corporations” that private prison companies often sign state contracts that guarantee prison occupancy rates of 90 percent. If states fail to meet the quota they have to pay the corporations for the empty beds.

The United States, from 1970 to 2005, increased its prison population by about 700 percent, according to statistics gathered by the ACLU. The federal Bureau of Justice Statistics, the ACLU report notes, says for-profit companies presently control about 18 percent of federal prisoners and 6.7 percent of all state prisoners. Private prisons account for nearly all newly built prisons. And nearly half of all immigrants detained by the federal government are shipped to for-profit prisons, according to Detention Watch Network.

States, with shrinking budgets, share in the corporate exploitation. They get kickbacks of as much as 40 percent from corporations that prey on prisoners. This kickback money is often supposed to go into “inmate welfare funds,” but prisoners say they rarely see any purchases made by the funds to improve life inside prison.

The wages paid to prisoners for labor inside prisons have remained stagnant and in real terms have declined over the past three decades. In New Jersey a prisoner made $1.20 for eight hours of work—yes, eight hours of work—in 1980 and today makes $1.30 for a day’s labor. Prisoners earn, on average, $28 a month. Those incarcerated in for-profit prisons earn as little as 17 cents an hour.

However, items for sale in prison commissaries have risen in price over the past two decades by as much as 100 percent. And new rules in some prisons, including those in New Jersey, prohibit families to send packages to prisoners, forcing prisoners to rely exclusively on prison vendors. This is as much a psychological blow as a material one; it leaves families feeling powerless to help loved ones trapped in the system.

A bar of Dove soap in 1996 cost New Jersey prisoners 97 cents. Today it costs $1.95, an increase of 101 percent. A tube of Crest toothpaste cost $2.35 in 1996 and today costs $3.49, an increase of 48 percent. AA batteries have risen by 184 percent, and a stick of deodorant has risen by 95 percent. The only two items I found that remained the same in price from 1996 were frosted flake cereal and cups of noodles, but these items in prisons have been switched from recognizable brand names to generic products. The white Reebok shoes that most prisoners wear, shoes that lasts about six months, costs about $45 a pair. Those who cannot afford the Reebok brand must buy, for $20, shoddy shoes with soles that shred easily. In addition, prisoners are charged for visits to the infirmary and the dentist and for medications.

Keefe Supply Co., which runs commissaries for an estimated half a million prisoners in states including Florida and Maryland, is notorious for price gouging. It sells a single No. 10 white envelope for 15 cents—$15 per 100 envelopes. The typical retail cost outside prison for a box of 100 of these envelopes is $7. The company marks up a 3-ounce packet of noodle soup, one of the most popular commissary items, to 45 cents from 26 cents.

Global Tel Link, a private phone company, jacks up phone rates in New Jersey to 15 cents a minute, although some states, such as New York, have relieved the economic load on families by reducing the charge to 4 cents a minute. The Federal Communications Commission has determined that a fair rate for a 15-minute interstate call by a prisoner is $1.80 for debit and $2.10 for collect. The high phone rates imposed on prisoners, who do not have a choice of carriers and must call either collect or by using debit accounts that hold prepaid deposits made by them or their families, are especially damaging to the 2 million children with a parent behind bars. The phone is a lifeline for the children of the incarcerated.

Monopolistic telephone contracts give to the states kickbacks amounting, on average, to 42 percent of gross revenues from prisoner phone calls, according to Prison Legal News. The companies with exclusive prison phone contracts not only charge higher phone rates but add to the phone charges the cost of the kickbacks, called “commissions” by state agencies, according to research conducted in 2011 by John E. Dannenberg for Prison Legal News. Dannenberg found that the phone market in state prison systems generates an estimated $362 million annually in gross revenues for the states and costs prisoners’ families, who put money into phone accounts, some $143 million a year.

When strong family ties are retained, there are lower rates of recidivism and fewer parole violations. But that is not what the corporate architects of prisons want: High recidivism, now at over 60 percent, keeps the cages full. This is one reason, I suspect, why prisons make visitations humiliating and difficult. It is not uncommon for prisoners to tell their families—especially those that include small children traumatized by the security screening, long waits, body searches, clanging metal doors and verbal abuse by guards—not to visit. Prisoners with life sentences frequently urge loved ones to sever all ties with them and consider them as dead.

The rise of what Marie Gottschalk, the author of “Caught: The Prison State and the Lockdown of American Politics,” calls “the carceral state” is ominous. It will not be reformed through elections or by appealing to political elites or the courts. Prisons are not, finally, about race, although poor people of color suffer the most. They are not even about being poor. They are prototypes for the future. They are emblematic of the disempowerment and exploitation that corporations seek to inflict on all workers. If corporate power continues to disembowel the country, if it is not impeded by mass protests and revolt, life outside prison will soon resemble life in prison.