The Pros And Cons Of A ConCon?

New York State voters to decide the risks of calling a Constitutional Convention this November.

On Nov. 7 voters in New York State will have an opportunity to gamble. Every two decades the option to call a statewide constitutional convention, or ConCon, appears on ballots. It is a chance to enshrine into law new progressive provisions lawmakers are unwilling or unable to enact — campaign finance reforms, term limits on the state legislature and enhanced worker rights and environmental protections.

Lawmakers in Albany can enact constitutional changes that are subject to voter approval, but a ConCon is “the only mechanism in New York that bypasses the legislature’s gatekeeping power,” said J.H. Snider, who runs the New York State Constitutional Convention Clearinghouse. He sees this year’s vote on a potential ConCon as a much-needed opportunity to clean up the state’s foundational text.

“The constitution needs to be modernized,” Snider said of the 43-page document. “It’s a cesspool. Nobody reads it. It’s way too long. It’s full of obsolete laws.” The ConCon “provides a unique democratic function in New York. People may decide they want to exercise that right or not, but they should understand that right.”

If voters give the ConCon the go-ahead this November, the following year they will have the ability to elect delegates, three for each of New York’s 63 Senate districts and 15 statewide. On April 2, 2019 the ConCon would convene in Albany. Any changes to the existing constitution, which dates back to 1894 and was last altered in 1938, will be up to voters to ratify. Delegates can either elect to submit their constitutional alterations on ballots as an entirely new constitution or as a series of amendments to be approved or struck down individually.

“We know that our democracy is broken here in New York,” said Dick Dadey of the government watchdog Citizen Union, which supports the ConCon. “Corruption is rampant. Voter turnout is low. Money is determining the outcome of too many of our political battles, be they legislative fights or elections. The machinery of our democracy is so old, it’s rusted out. We need to bring it into the 21st century with a new constitution that will value every New Yorker and engage every voice.”

Early voting, statewide public financing of elections, term limits on members of the State Assembly and Senate and caps on campaign donations are among the reforms Citizens Union wants the ConCon to institute. Some environmental groups, pointing to the Flint-like water crisis in Hoosick Falls, New York, would like to see the right to clean water and, hell, why not, clean air, written into the constitution as well.

But ConCons are a risky proposition.

Opponents of the ConCon  — and they are numerous and varied — warn Albany’s swampy culture of corruption could subsume attempts at reform and the convention could have quite the opposite outcome its advocates intend. The very systemic problems that ConCon supporters want to alter could corrupt the ConCon process itself. There is no limit on campaign expenditures on ballot measures or on donations to political action committees in New York, for instance, and contributions made 19 days before elections are exempt from disclosure until after tallies are complete.

Supporters of a ConCon see a unique opportunity to reform a broken state government while opponents warn Albany’s swampy culture of corruption could subsume attempts at reform.

“The money that is going to be wired into the process from large financial institutions is going to be quite extraordinary,” said Mike Fabricant, vice president of the Professional Staff Congress (PSC), a union that represents 27,000 faculty and staff at the City University of New York. “We do not, at this moment, have the power to push back against that kind of money.”

There are also a lot of known unknowns surrounding the ConCon, including what statutes the legislature will enact on the delegate selection process. Will potential delegates’ party affiliation appear beside their names on the ballot, as it has in the past? Will parties run slates for the 15 statewide delegate slots or will voters have the opportunity to vote for candidates individually. Ironically, elected officials are eligible to run and even receive parallel salaries, which could nullify the ConCon’s chances of bypassing the legislature.

Lieberman raises another issue with the process that undermines the likelihood the convention will represent the will of the people: delegates will be elected from Senate districts carved out to benefit Republicans who narrowly control the State Senate in an otherwise solidly liberal state. “We don’t object inherently to the notion of using State Senate districts [to determine delegates], but the districts have been gerrymandered in such a way as to frustrate any illusion of this being a convention determined on the basis of one person, one vote,” Lieberman said.

Fearing the worst, cats and dogs are working together to dissuade the electorate from rolling the dice. Along with NYCLU, the Working Families Party has teamed up with the Conservative Party, Planned Parenthood with anti-choice groups. LGBT rights advocates, unions and environmental organizations have joined forces with the likes of the State Rifle and Pistol Association. Together they’ve formed a broad coalition calling itself New Yorkers Against Corruption.

“We’re aligned with groups we don’t traditionally agree with and they certainly don’t agree with us, but I think we’re on the right track,” said Mike Long, Chairman of the Conservative Party. “We have a pretty good constitution. It has nothing to do with the corruption that goes on in our state. You can have all the constitutional conventions in the world and pass all the laws that you want to make tougher penalties, but there will always be people who fall into the corrupt path of life. Corruption alone is not an excuse to open a can of worms and throw the baby out with the bath water.”

One might think of the effort to put the kibosh on the ConCon as a kind of stand-off between different interest groups. Each wants to protect the niche they have carved out within New York’s political ecosystem and each is fearful a ConCon will present an opening for new or existing rivals to exploit.

“The people who are against this are the people who have a great deal of power right now and are essentially protecting the status quo,” said Dick Dadey of Citizens Union. “People who protect the status quo have a lot to lose if this convention is convened and the power structure is realigned.” 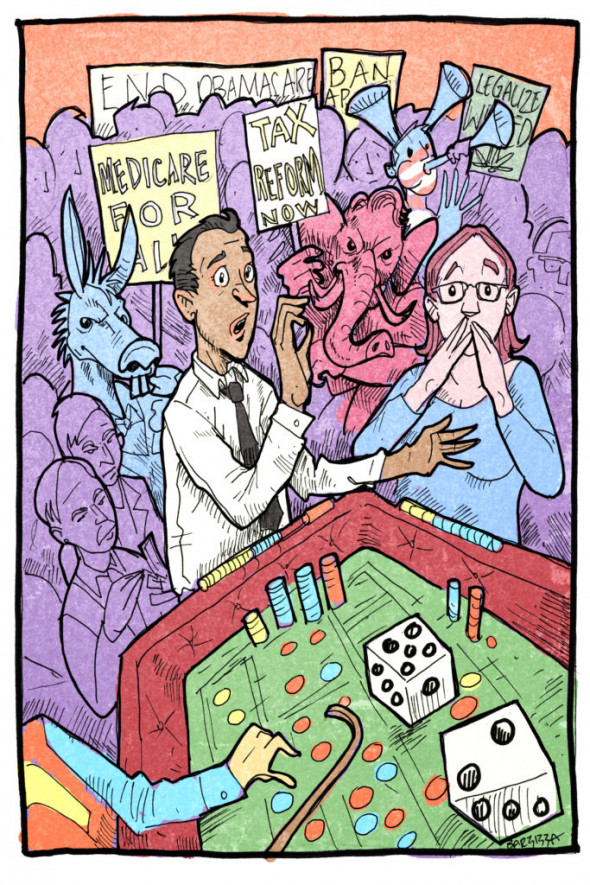 Many of the groups opposing the ConCon today were once some of its greatest advocates and have gained the most from past conventions. In 1894, amid the burgeoning conservation movement, a “forever wild” provision was added to the constitution that shields the Adirondacks and Catskills from development. The 1938 convention added amendments safeguarding the right to collectively bargain, protected pensions for state employees and placed the onus on the state to provide for those in need — a law later interpreted as a right to shelter for the homeless.

During the 1938 convention, “people responded to the material circumstances of their lives,” said PSC’s Mike Fabricant. “They were in a depression. Many were not close to starvation; they were starving. … Movements emerged out of the drop in the market and those movments carried forward a reform agenda. We don’t have those movements presently.”

Fabricant is not unique among labor leaders, particularly those who represent state employees, in urging for what he calls as a “tactical retreat” from the ConCon. Much to the ire of budget hawks in Albany, New York is essentially forbidden from defaulting on its pension obligations thanks to the 1938 convention. Given the legislature’s willingness to chip away at retirement funds — over the past 40 years they’ve gradually established a six-tier system in which new hires on the bottom rung receive a fraction of what their older counterparts cash out with — pensions are not a subject public employee unions want to open up for debate.

“Many on Wall Street and off see pensions as a weight on their purse and those folks will fill, or their money will fill, the convention,” said Fabricant.

ConCon proponents accuse those pushing against the convention of exaggerating the risk the ConCon poses.

While public employee retirement benefits and the forever clause “are technically at risk when you open up the constitution, no one has been able to show me there’s an organized threat to take away pensions or open up the Adirondacks to development,” said Dadey. “There’s no constituency for that.”

Money, however, is a constituency of its own. Wealthy special interests could make up for their lack of public support with their dollar bills. If the ConCon is approved, it will likely set up a battle — which some worry could prove near-apocalyptic in nature — between the political forces of reform and reaction.

According to a poll from Siena College released this September, 45 percent of registered voters in New York State favor holding a ConCon, 33 percent are opposed and 22 percent are undecided.