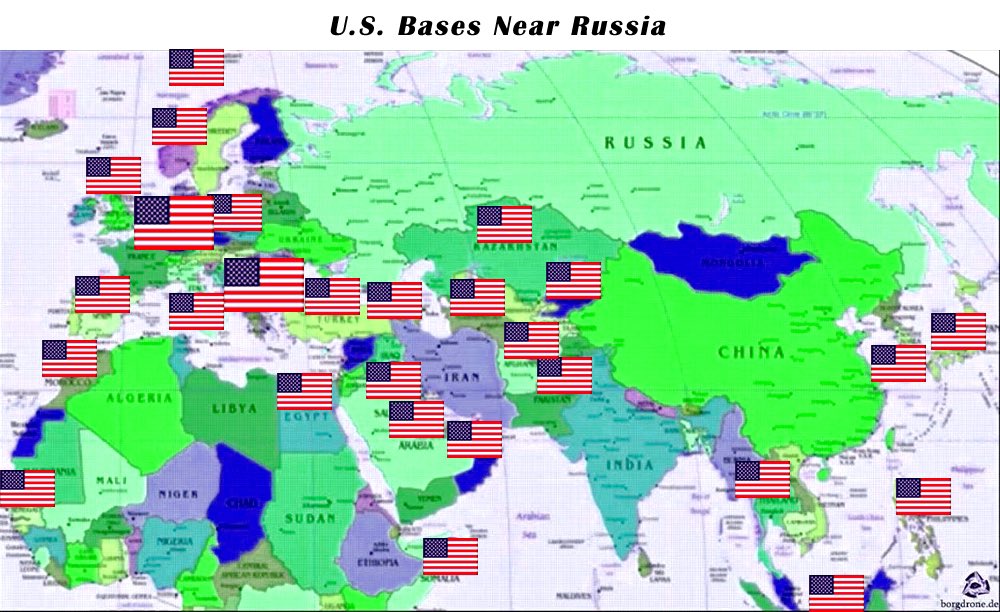 The Provocations Behind The ‘Unprovoked’ War

Back in 1949, the United States, Canada and 10 Western European countries formed a military alliance called the North Atlantic Treaty organization, or NATO. Washington had decided that the Soviet Union, its wartime ally — the one that had broken the back of the Nazi war machine — now was its peacetime enemy.

By 1990, the Soviet Union and most of its socialist allies were collapsing, the result of internal contradictions and outside pressures. The U.S. was promoting the reunification of Germany — a move opposed by Soviet leader Mikhail Gorbachev, who still remembered how his country had lost 20 million people to the Nazi invasion, and was not real excited about the prospect of a revitalized Germany.

So U.S. Secretary of State James Baker offered a deal: If Gorbachev agreed to a united Germany, NATO, which by that time had grown from its original 12 members to 16, would promise not to advance one inch eastward. Gorbachev agreed.

Today, each of the 14 new NATO member countries has been to the east. Of the seven countries bordering Russia’s western flank, Estonia, Latvia and Norway already are NATO members. Finland, Georgia and Ukraine have asked to join.

Once that process is completed, Russia’s only western border ally would be Belarus. Every other bordering country would be committed by Article 5 of the NATO Charter to come to each other’s defense in the event of a military confrontation.

And this should worry Russia, why?

For the sake of argument, let’s leave aside the question of whether any of these NATO wars were justified. Instead, let’s look at the relative balance of forces between Russia, the U.S. and NATO.

According to the Stockholm International Peace Research Institute, Russia’s military expenditure in 2021 was $65.9 billion. The United States’ was $801 billion — more than 12 times that of Russia.

For NATO, the combined military expenditures of all 30 member countries in 2021 was an estimated $1.2 trillion — more than 18 times that of Russia. And even though Russia and NATO have rough parity when it comes to nuclear weapons, it’s just possible that the steady eastward expansion of a steadily growing and hostile NATO might have raised some legitimate security concerns in Russia.

Then, there’s the matter of U.S. support for the anti-Russian Ukrainian coup of 2014. This began as peaceful protests against then-President Viktor Yanukovych for his opposition to closer economic ties with Western Europe. It morphed into a violent uprising in which openly neo-Nazi organizations played a major role.

The U.S. support was not in dispute. Sen. John McCain, R-Ariz., had traveled to give encouraging speeches to the protesters. U.S. Assistant Secretary of State for European and Eurasian Affairs Victoria Nuland handed out pastries to the crowds. More importantly, she later openly bragged that the U.S. had spent $5 billion promoting “pro-democracy” groups in the country.

The coup changed Ukraine in fundamental ways. The new government banned the use of the Russian language for official business, even though 17% of the population was ethnic Russian and some 30% spoke Russian as a first language.

Statues honoring Ukrainian fascists like Stepan Bandera, who had collaborated with the Nazi occupation, were erected while memorials to Soviet war heroes were taken down. The neo-Nazi organizations were free to roam the streets, attacking anyone opposed to the coup. Those acts of violence included the May 2014 Odessa Massacre, where dozens of people were murdered in the Black Sea port city.

Meanwhile, Ukraine began to operate as a NATO member in everything but name, including carrying out joint military exercises right up to Russia’s border.

None of this is meant to endorse Russia’s war. But since the Biden administration already has given Ukraine $5.3 billion in military aid, it might be a good idea to view the war in a historical context.

And if we do that, “unprovoked” might not be the first word that comes to mind.

This Op-Ed was originally published in the Richmond Times-Dispatch – print edition on Sunday, July 24, 2022; online edition July 23 at https://richmond.com.

Phil Wilayto is editor of The Virginia Defender and coordinator of the Odessa Solidarity Campaign. Contact him at: virginiadefendernews@gmail.com.