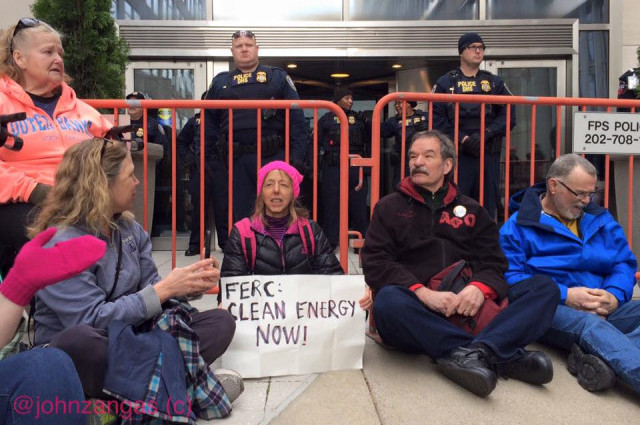 The Public Is Barred From Energy Agency’s Public Meeting

All photos: By John Zangas of DC Media Group

Washington, DC – The public was barred from a Federal Energy Regulatory Commission (FERC) meeting scheduled for 10 am Thursday. Over 30 Department of Homeland Security police met Beyond Extreme Energy (BXE) at the front doors, preventing entry to what organizers are calling a sham meeting with industry insiders.

“It’s a ‘denial of citizens rights’ and prevents the public from taking part in Energy policy proceedings,” said organizer Ted Glick, with Beyond Extreme Energy. He called on FERC to be transparent and follow their mandate to put the public interests before oil and gas industry profits.

Over 60 persons allied with BXE had planned to attend the meeting to express opposition to an increasing number of fracking energy infrastructure projects. Pipeline and Liquid Natural Gas projects must get permit approvals from FERC in order to be built, but virtually every project submitted by the gas and oil industry is approved, say activists, making FERC a “rubber stamp” for every project the gas and oil industry submits, while failing to act on citizens’ concerns for their health, land and the impact gas projects have on the environmental.

BXE protesters held a sit-in at the doors in response DHS police actions and then held a press conference outside.

Maggie Henry, an organic produce farmer and land owner, who traveled from Northeastern Pennsylvania to attend the meeting, said her farmland was rendered unusable from local fracking pollution and a 42-inch diameter pipeline built 20 feet from her front door. “I wanted to raise my grandchildren on my farm and market organic vegetables, but the gas company took all that away from me,” she said. 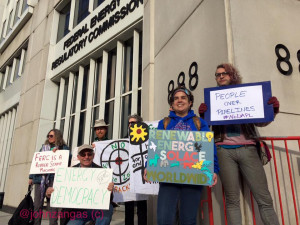 “They’re pushing people to a point where they have to fight back.They’re radicalizing thousands of people,” said Elise Gearhart, who also traveled from Pennsylvania to the FERC meeting, only to be barred.

Gearhart’s family owns a farm and her mother was arrested three times protesting the Mariner East 2 Pipeline easement, twice on her own land. “People who would have never been activists, teachers and farmers and just regular people are being radicalized,” she said.

With every arrest her mother was released without charges. “How can you arrrst someone on their own land?” she asked.

“I’m not scared of Sunoco or FERC or Trump because under these circumstances where you’re forced to fight, fear is irrelevant [and] you’re fighting for your life your water, your land, your ability to grow food,” she said.

BXE held a press conference outside FERC and vowed to return at future meetings.

The BXE protest was one of the first of what will be many civil disobedience actions planned throughout the week. Police presence around Washington is very heavy with over 29,000 law enforcement and security on hand for the Inauguration.