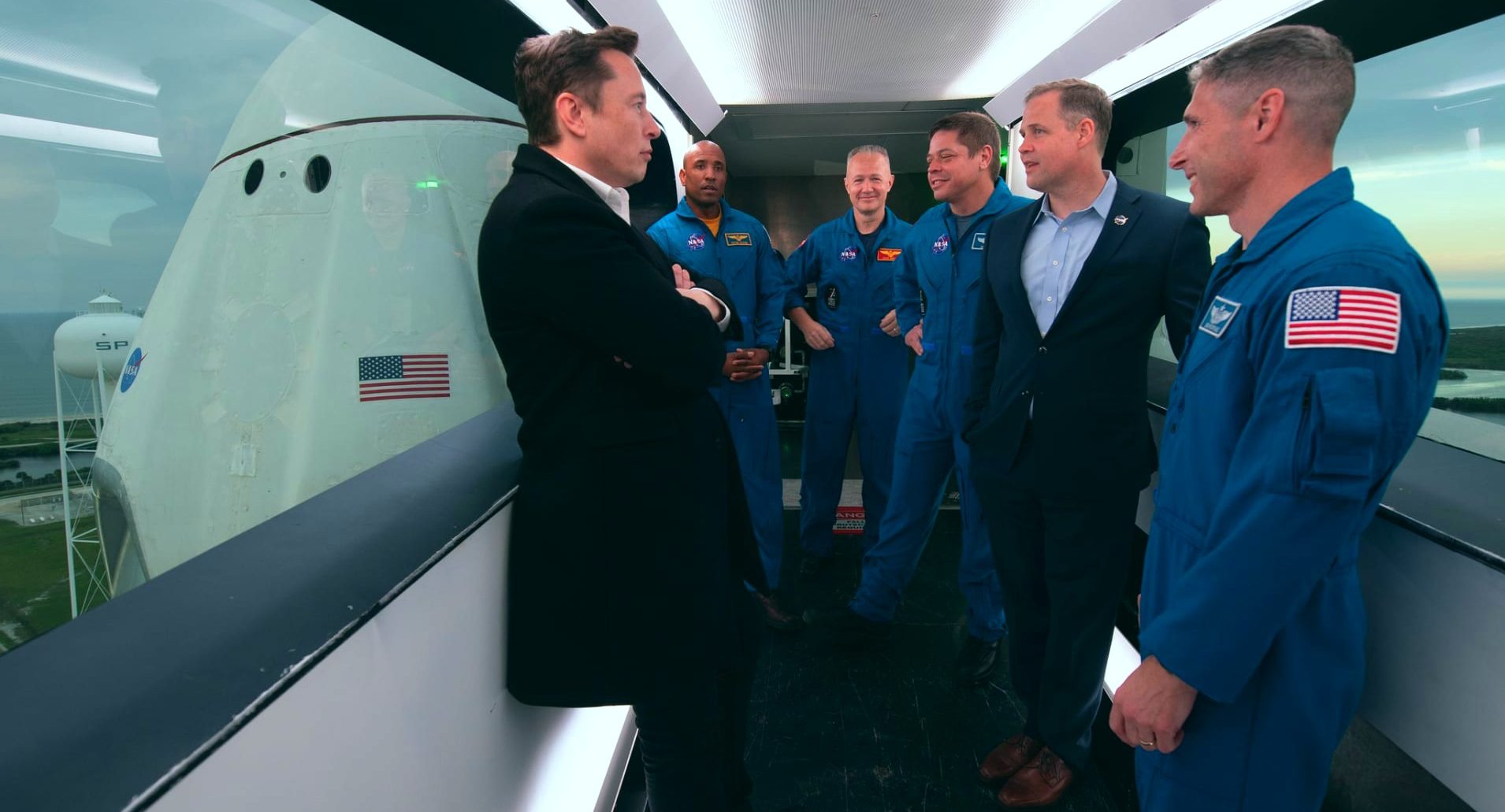 The Push For Nuclear Power In Space

And Musk wants to nuke Mars.

Last week a SpaceX rocket exploded in a fireball at the SpaceX site in Texas. “Fortunately,” reported Lester Holt on NBC Nightly News, “no one was aboard.”

But what if nuclear materials had been aboard?

The nuclear space issue is one I got into 35 years ago when I learned from reading a U.S. Department of Energy news letter about two space shuttles, one the Challenger which was to be launched the following year with 24.2 pounds of plutonium aboard.

The plutonium the shuttles were to carry aloft in 1986 was to be used as fuel in radioisotope thermoelectric generators RTGs that were to provide a small amount of electric power for instruments on space probes to be released from the shuttles once the shuttles achieved orbit.

The plutonium-fueled RTGs had nothing to do with propulsion.

I used the U.S. Freedom of Information Act to ask what would be the consequences of an accident on launch, in the lower or upper atmosphere and what about the dispersal of deadly plutonium. A few years earlier, I wrote Cover Up: What You Are Not Supposed to Know About Nuclear Power, so I was well familiar with plutonium, considered the most lethal radioactive substance.

For 10 months there was a stonewall of challenges to my FOIA request by DOE and NASA. Finally, I got the information, heavily redacted, with the claim that the likelihood of a shuttle accident releasing plutonium was “small.”

Said one document: “The risk would be small due to the high reliability inherent in the design of the Space Shuttle.” NASA put the odds of a catastrophic shuttle accident at one-in-100,000. .animatedsoftware.com/cassini/kg9709tw.htm

It was on its next mission in May 1986that it was slated to have a plutonium-fueled RTG aboard.

From a pay phone in an appliance store -amid scores of TV sets with that horrible video of the Challenger exploding I called The Nation magazine and asked the folks there whether they knew that the next launch of the Challenger was to be a nuclear mission. They didn’t.

They had me write an editorial that appeared on The Nation‘s front page titled “The Lethal Shuttle.” It began, “Far more than seven people could have died if the explosion that destroyed Challenger had occurred during the next launch””

And I got deeper and deeper into the nukes-in-space issue authoring two books, one The Wrong Stuff, presenting three TV documentaries, writing many hundreds of newspaper and magazine articles and speaking widely on the issue.

NASA, incidentally, later in 1986, drastically increased the odds of a catastrophic shuttle accident to one-in-76. It turned out the one-in-100,000 estimate was based on dubious guessing.

I found that accidents involving the use of nuclear power in space is not a sky-is-falling threat. In the then 26 U.S. space nuclear shots, there had been three accident, the worst in 1954 involving a satellite powered by a SNAP 9-A radioisotope thermoelectric generator fueled with plutonium.

The satellite failed to achieve orbit, broke up in the atmosphere as it came crashing back down to Earth, its plutonium dispersing as dust extensively on Earth. Dr. John Gofman, an M.D. and Ph.D., professor of medical physics at the University of California at Berkeley, formerly associate director of Lawrence Livermore National Laboratory, author of Poisoned Power and involved in early studies of plutonium, long pointed to the SNAP 9-A accident as causing an increase in lung cancer on Earth.

Today the use of nuclear in space is being pushed harder than ever.

As Linda Pentz Gunter, editor at Beyond Nuclear International, recently wrote on CountPunch: “Yet undeterred by immorality and expense, and apparently without the slightest concern for the radioactive dirt pile these reactors will produce, NASA and the Department of Energy are eagerly soliciting proposals.”

In July, too, the White House National Space Council issued a strategy for space exploration that includes “nuclear propulsion methods.” “US Ramps Up Planning for Space Nuclear Technology”

General Atomics Electromagnetic Systems has come out with a design for a nuclear propulsion reactor for trips to Mars.

Nuclear propulsion, its promoters are saying, would get astronauts to Mars quicker.

Shouted the headline in Popular Mechanics last month: “The Thermal Nuclear Engine That Could Get Us to Mars in Just 3 Months.”

And Elon Musk, founder and CEO of SpaceX, has been touting the detonation of nuclear bombs on Mars to, he says, “transform it into an Earth-like planet.”

As Business Insider explains, Musk “has championed the idea of launching nuclear weapons just over Mars’ poles since 2015. He believes it will help warm the planet and make it more hospitable for human life.”

It’s been projected that it would take more than 10,000 nuclear bombs to carry out the Musk plan.

The nuclear bomb explosions would also would render Mars radioactive.

The nuclear bombs would be carried to Mars on the fleet of 1,000 Starships that Musk wants to buildlike the one that blew up this week.

SpaceX is selling T-shirts emblazoned with the words “Nuke Mars.”

Beyond the this completely insane plan to ruin Mars, as on Earth, solar energy can provide all the power needed for would-be settlements on Mars and the Moon.

Said the headline in Universe Today this month, “Solar Power is Best for Mars Colonies.” The extensive article states how “a NASA-sponsored MIT think-tank has weighed up the future energy needs of a manned settlement on Mars and arrived at an interesting conclusion”solar arrays might function just as well, if not better, than the nuclear options.”

Studies and articles through the years on using solar energy on Mars and the Moon.

This includes a 2016 Discover magazine piece, “How to Harvest Terawatts of Solar Power on the Moon,” which spoke of the Japanese corporation, Shimizu, “gearing up to develop solar power on the moon.” The “photovoltaic cells themselves could be tissue thin, since the moon has no weather or air,” said the article, “and half of the moon is in sunlight at any one time.” A huge amount of solar power energy could be generated on the Moon that could be beamed back to Earth, related the article.

As to the use of nuclear power for propulsion in space, I’ve written many pieces about the solar alternative: solar sails.

There was a comprehensive story in New Scientist in October on this, “The new age of sail,” it was headlined. The subhead: “We are on the cusp of a new type of space travel that can take s to places no rocket could ever visit.”

The article began relating 17th Century astronomer Johanne Kepler observing comets and seeing “that their tails always pointed away from the sun, no matter which direction they were traveling. To Kepler, it meant only one thing: the comet tails were being blown from the sun.”

Indeed, “the sun produces a wind in space” and “it can be harnessed,” said the piece. “First, there are particles of light streaming from the sun constantly, each carrying a tiny bit of momentum. Second, there is a flow of charged particles, mostly protons and electrons, also moving outwards from the sun. We call the charges particles the solar wind, but both streams are blowing a gale”that’s in the vacuum of space.

Japan launched its Ikaros spacecraft in 2010sailing in space using the energy from the sun.

Last year, the LightSail 2 mission of The Planetary Society was launchedand it’s still up in space, flying with the sun’s energy.

New systems using solar power are being developed – past the current use of thin film such as Mylar for solar sails.

The New Scientist article spoke of scientists “who want to use these new techniques to set a course for worlds currently far beyond our reach namely the planets orbiting our nearest star, Alpha Centauri.”

Back to Challenger and RTGs and their generation of a little amount of electricity, less than a hair dryer uses, for on-board electrical systems, NASA finally saw the light, sunlight.

In 2011 it launched the Juno space probe to Jupiter-which instead of an RTGs used three solar arrays to generate onboard electricity. Juno is still up there, orbiting and studying Jupiter, where sunlight is a hundredth of what it is on Earth.

After the SNAP 9-A disaster, NASA stopped using RTGs for satellites and was instrumental in developing solar photovoltaic technology. All satellites launched today use solaras does the International Space Station.

The leading group since 1992 challenging the use of nuclear power in space is the Maine-based Global Network Against Weapons and Nuclear Power in Space (www.space4peace.org).

Its long-time coordinator, Bruce Gagnon, comments: “The Elon Musk plan to explode 10,000 nukes over Mars epitomizes the insanity of this rush to move nuclear power into space.”

“The Department of Energy, which would be responsible for fabricating all of these various nuclear devices being considered for space operations, has a long tragic record of worker and environmental contamination at their string of labs around the nation.”

“Take, for example the 1997 launch of the Cassini space probe that carried 72 pounds of toxic plutonium-238 aboard,” Gagnon continues. “Just prior to the launch it was reported that Los Alamos National Laboratory in New Mexico had 244 cases of worker contamination while fabricating the plutonium generators for that mission. So, it is not just some theoretical equation- that there might be some accident upon launch. The nuclear production process is killing us before any rocket lifts off from a launch pad.”

“The plan to build nuclear-powered rockets to Mars, nuclear mining colonies on the planetary bodies and ultimately nuclear-powered weapons in space all signal the dangers and lunacy of those driving this mad rush to colonize space,” says Gagnon. “These space entrepreneurs and the nuclear/military industrial complex have learned nothing since the atomic bombs were exploded over the heads of the people of Hiroshima and Nagasaki.”