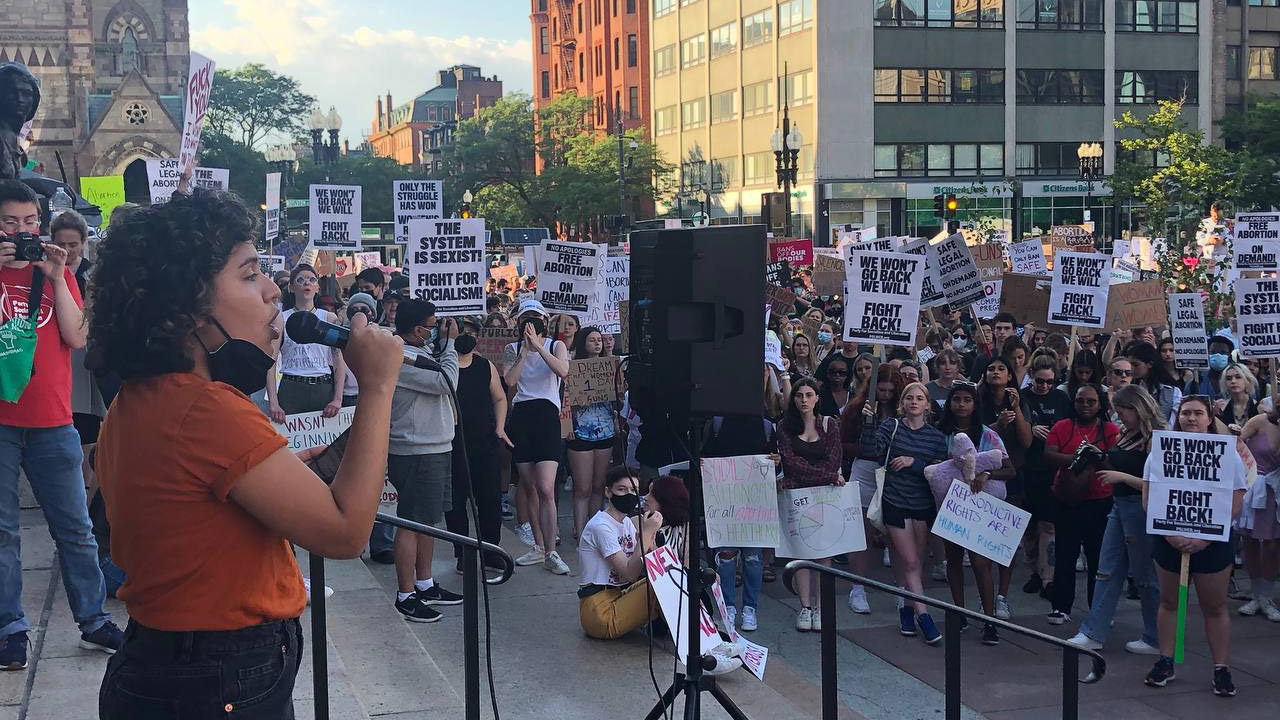 Above Photo: Parul Koul, executive chair of the Alphabet Workers Union-Communications Workers of America, speaks at an abortion rights rally on June 24, in Boston. The Party for Socialism and Liberation.

The struggle to regain abortion rights for millions of women in the US continues, while Biden makes repeated concessions to the right.

In the few weeks that have passed since the United States Supreme Court ruled to overturn Roe v. Wade on June 24, stripping abortion rights from millions of women, the people of the United States have continued to fight back. Despite assurances, the response from the Biden administration to protect the fundamental right has been deemed resoundingly inadequate.

“The mass of the people will have to flood into the streets, and will have to remain in the streets,” Monica Illyrich, a young organizer with the Party for Socialism and Liberation, told Peoples Dispatch. “We will have to do everything they can to let these politicians know that they will not be able to quietly and peacefully go on with their lives, trying to jeopardize the lives of so many millions of people.”

Illyrich, alongside others, participated in an 18-hour protest in front of the Georgia Judicial Center in Atlanta, from July 4 to 5, in order to protest a pending Georgia abortion ban that would prohibit most abortions after a fetal heartbeat is detected. This action is part of a growing movement in defense of abortion rights, rising up in states where politicians are doing everything in their power to eliminate this right. These states include Georgia, and South Carolina where, on June 28, around 150 protesters descended on the Statehouse to demonstrate against a six week ban on abortion and the threat by conservative lawmakers of a total ban.

Many protesters have used the tactic of publicly shaming those responsible for Roe’s overturn, such as conservative Supreme Court Justice Brett Kavanaugh. On July 6, activists protested outside Morton’s Steakhouse in Washington, DC where Kavanaugh was having dinner, forcing him to leave through a back door.

In response to pressure from the streets, President Joe Biden has taken executive action. On July 11, the US Department on Health and Human Services (HHS) announced a guidance insuring that abortions are protected under federal law if carried out as part of emergency medical care. As HHS Secretary Xavier Becerra stated, “federal law preempts state abortion bans when needed for emergency care.”

Biden also signed an executive order on June 8, taking steps to ensure access to contraception and medication abortion, protect the privacy of those seeking reproductive healthcare, and ensure the physical safety of those seeking abortion care, among other measures.

Protection for patients and providers has been a long standing demand of the movement. Abortion clinics and women’s health clinics across the country have for decades been targeted by protesters who in many cases have taken to extreme violence such as bombings, arson, and murders. In 2009, an anti-abortion extremist assassinated renowned abortion care provider George Tiller in Witchita, Kansas.

On a “normal” day, clinics on a national level face an almost around-the-clock presence of protesters who harass those that enter the premises. Stephanie Song, a medical student who volunteered at the Alabama Women’s Health Clinic in Huntsville, told Peoples Dispatch, “The protestors would basically harass anybody who got near the clinic, including postal workers, which I thought just showed how blind their ideology was.” The Huntsville clinic is one of three abortion clinics in the state.

Some states passed buffer zone laws which prohibit protesters from picketing outside clinics entirely, or only permit protesters to stand outside of a given distance, but even these protective mechanisms have been undermined by the legal system. In Massachusetts, the buffer zone law was overturned by the Supreme Court in 2014.

Becerra also directed the HHS Office for Civil Rights to issue new privacy guidances, clarifying that in most cases, medical providers are not required, and in many cases not permitted, to disclose the private information of patients to law enforcement. Earlier in the year, the case of Texas woman Lizelle Hererra sparked outrage, when she was arrested on murder charges after hospital staff reported her to local police for allegedly performing an abortion on herself.

Yet there are important measures that the Biden administration refuses to take, such as expanding the Supreme Court so that ultra-conservative justices no longer have a majority. Currently, conservatives outnumber liberal justices six to three. Many of these justices have already indicated that they will oppose other rights won by Supreme Court decisions such as interracial and homosexual marriage and the right to contraception, under the same justification as their opposition to Roe if they are brought to the discussion.

As a solution, many progressives such as Alexandria Ocasio Cortez have proposed expanding the number of justices on the Supreme Court, so that Biden will be able to nominate people who will outweigh the conservative majority. The size of the Supreme Court is not set in the Constitution, so Congress is able to change the number of seats at any time. This has been done seven times in US history. Yet, so far, the Biden administration has made it clear that the President does not want a court expansion.

As president, Biden also has the power to permit abortions on federal land, such as on the various military bases throughout the country, many within states where abortion is banned. Abortion is currently banned in 13 out of 50 states. The Biden administration has also refused to do this, and White House press secretary Karine Jean-Pierre stated on June 28 that using federal lands in this way would have “dangerous ramifications.”

Biden is also attempting to nominate Chad Meredith, an anti-abortion Republican, as a federal judge. This is despite pushback from many politicians in his own party, who have expressed that an anti-choice judge ascending to a lifelong position of federal power bodes ill for abortion rights. This nomination is reportedly part of a deal with notoriously ruthless Republican Senator Mitch McConnell.

Anti-abortion members of Congress are showing no such restraint or willingness to listen to the majority of the people of the US, who overwhelmingly support abortion rights. Many prominent Republican politicians, such as former Vice President Mike Pence, are pushing for nationwide abortion restrictions which could take away reproductive healthcare rights for 165 million people.

As Pence tweeted on June 24, the day Roe was overturned, “We must not rest and must not relent until the sanctity of life is restored to the center of American law in every state in the land.”

“It wouldn’t surprise me if they go in to pass a nationwide abortion ban,” Illyrich told Peoples Dispatch. “But I think whether or not we have a Supreme Court on our side or any of these legislators on our side, the people will overturn a decision like that.”

The Working Class Fights Back

Organized labor in the US is also joining the abortion rights movement. Prominent Starbucks Workers United Organizer Laila Dalton pointed out at an abortion rights rally in Phoenix, Arizona that the right to abortion is a class issue, “Wealthy people can afford options that rank and file workers can’t.”

Unionized workers at Google are taking measures to ensure that the company protects the privacy of those seeking abortion services. “Since the alarming Supreme Court decision to overturn Roe v. Wade, we stood alongside other Google workers and users to demand that Google defend abortion access by committing to no longer store any data that could be used to prosecute Google users,” said Ashok Chandwaney, Software Engineer at Google and member of Alphabet Workers Union-Communications Workers of America in a statement.

“If Google is truly committed to standing with people in the US who want to exercise their right to choose, they must end their financial support of anti-reproductive justice politicians and political committees,” he added.

The organizing happening in the tech sector is especially important, considering data privacy concerns and censorship, such as Instagram and Facebook removing posts offering abortion pills.

“We need to use all sectors of our power as the people, as the masses…withholding labor in an organized way,” Illyrich said, adding, “We have a union wave and we need to be able to…harness that and to marry those struggles.”