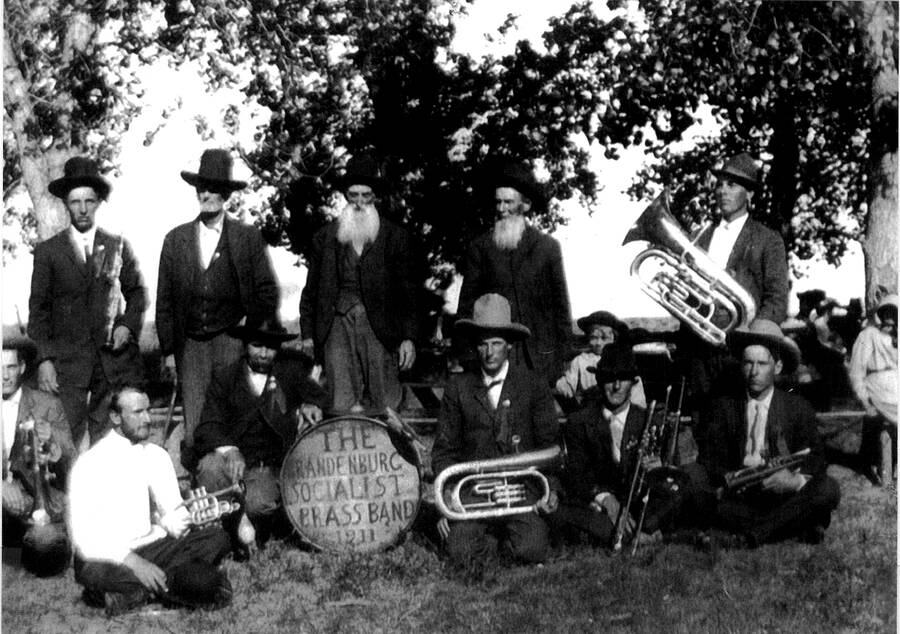 The Radical Immigrant Farmers Who Helped Defeat The Robber Barons

And Shaped The U.S. Tradition Of Rural Socialism.

“I was born in Fayette County, Texas, from German parents, and who fled from the reaction [to] the 1848 revolution. I think that I inherited some of my revolutionary qualifications. I am not responsible for them. I cannot help it.”

So testified E.O. Meitzen before the Commission on Industrial Relations in March 1915 about why he involved himself in the political struggles of working farmers. At the time, Meitzen was a veteran leader of the Texas Socialist Party. Nearly thirty years earlier, his inheritance led him to help organize and lead the Fayette County Farmers’ Alliance. When the Farmers’ Alliance failed to bring relief to farmers, Meitzen joined the Populist revolt, becoming a statewide leader of the People’s Party. The Meitzen political legacy extended to E.O.’s children, in particular his son E.R., who was a leader successively in the Farmers’ Union, the Socialist Party, the Nonpartisan League and the Farm-Labor Union of America. For three generations, from the 1840s to 1940s, the Meitzens spearheaded movements and organizations that fought for the economic and political rights of laborers and working farmers.

After the failure of the revolution of 1848, a significant number of German 48ers, including the Meitzens, fled the counterrevolution to make new beginnings in Texas and other parts of the United States. They carried with them their revolutionary experiences and radical politics. Nationally, as historian Mark Lause has shown, German 48ers helped speed the already occurring transition of U.S. agrarian radicals from communitarian utopian socialism to political activism through the formation of parties as the main tactic to achieve labor reforms and the end of slavery. German Texan 48ers were the first to introduce radical farmer-labor politics to Texas.

The Meitzens sought to shape the political and economic contours of democracy at a time when war, industrialization, and immigration dramatically transformed the United States. Industrial capitalism replaced the independent artisan and yeoman with the factory worker and tenant farmer. After the genocidal removal of many of the continent’s Indigenous people, the owners of capital encouraged the workers of the world to immigrate to the United States to fill the factories and fields. These mass migrations changed the racial and ethnic composition of the nation. These transformations, though, did not go uncontested, as workers and farmers organized collectively, in both forward-looking and reactionary ways, to resist the economic, political and social demands of capitalism.

Much of the working class viewed land ownership as the key to independence and self-sufficiency. Up until the beginnings of the twentieth century, many workers aspired to own land, clinging to popular republican notions that equated liberty and land ownership. From Tom Paine’s Agrarian Justice and the Agrarian Party of Thomas Skidmore to the unfulfilled promise of forty acres and a mule for freedmen to the promise of cheap land drawing wave upon wave of immigrants, land meant freedom. Wage-labor status, in the minds of many workers, was only to be temporary — until they could earn enough money to obtain land. This condition, however, proved to be more permanent as the percentage of farmers in the labor force dwindled from 53% in 1870 to 27% in 1920, the same year the United States went from a majority rural to a majority urban nation. Still, many workers remained connected to the land in occupations such as the transportation of agricultural products and the manufacturing of farming implements.

For those who worked the land, especially in the South, they did so not as owners but as sharecroppers or tenant farmers. In many rural southern counties, tenants were the majority of farmers. The living and working conditions of tenant farmers were comparable to the worst of those faced by factory workers. Whether one toiled as a coal miner in West Virginia or a tenant farmer in a Texas cotton field, their economic, social, and political standing placed them both in the working class. Despite the traditional notion of an inherent hostility between urban toilers and rural tillers of the soil, demands related to land ownership were a consistent part of working-class political platforms from the 1840s to 1920s.

The presence of organizations and parties, from the 1870s through the 1920s, representing the interests of working farmers and laborers, demonstrates the existence of a decades-long farmer-labor bloc in U.S. political culture. Though its origins go back further, the sustained farmer-labor bloc began with the Knights of Labor, Greenback Labor Party, and Grange of the 1870s. The farmer-labor bloc then progressed through the Farmers’ Alliance, the Populist movement, the Socialist Party, the Nonpartisan League, and the Farmer-Labor conventions of the 1920s. The farmer-labor bloc was not something that flared up now and then, punctuated by periods of hibernation, as third parties and protest movements are often incorrectly viewed. The bloc was a regular feature of U.S. political culture for more than five decades. Land, as powerfully as wages, shaped working-class ideology and politics in the United States.

A shared producerist philosophy connected the organizations of the farmer-labor bloc. The belief that those who labor should control what they produce differed radically from the corporate practice of controlling and profiting from the labor of others. Working independently of the Democratic and Republican parties, the bloc served as a bulwark against unrestrained capitalism. Though enacted into law, in much watered-down versions, by Democrats and Republicans, many of the historic reforms of the Progressive and New Deal Eras originated and were tirelessly championed by individuals and organizations within the farmer-labor bloc. Indeed, without their efforts, a Progressive Era or New Deal likely never would have happened.

Around a century has transpired since the collapse of the agrarian-based farmer-labor bloc. The general public has largely forgotten the people of the farmer-labor bloc and the parties and mass mobilizations they created. When historians discuss the farmer-labor bloc, they craft a characterization of misguided hayseeds, isolated in their local communities, who looked more to the past than to the future. Intellectuals have dismissed farmer-labor radicalism as wild-eyed messianic evangelism or a product of a business orientation or coming from undefined middle-class values. Yet a deeper analysis shows that without the actions and organizations of these country bumpkins who contested the robber barons, we might never have left the Gilded Age and would be denied their example in fighting our own latter-day robber barons.