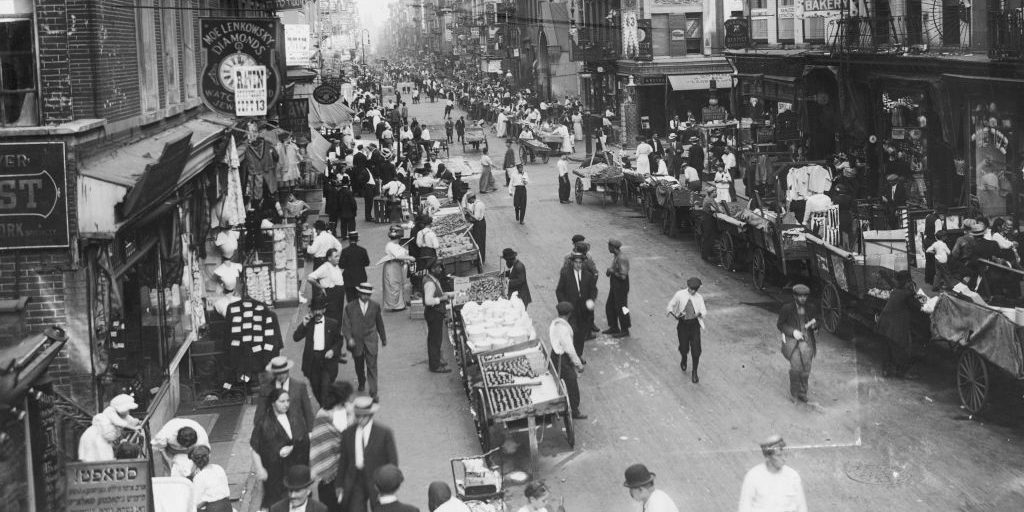 More than a century later, their struggle remains as relevant as ever.

From 26 December 1907 to 9 January 1908, 10,000 tenants, predominantly Jewish immigrants from Eastern Europe living in New York City’s Lower East Side, took part in a historic rent strike. During an economic depression causing mass unemployment and grinding poverty, landlords tried to hike rents by thirty-three percent. With their cry to ‘fight the landlord as they had the Czar’, the tenants won a partial victory, with rents significantly reduced for 2,000 households.

The movement established a tradition of militant working-class housing campaigns that eventually contributed to winning vital rent controls that still protect millions of the city’s tenants today. But as the Covid crisis continues, New York City renters are again organising against rapacious landlordism.

The 1907-8 rent strike was led by a remarkable woman, Pauline Newman, who had arrived in the US from Lithuania in 1901, aged about nine (her birth certificate was lost along the way). She was one of two million Jews who arrived in the country between 1881 and 1924, escaping antisemitic pogroms.  Still a child, she started work, first making hairbrushes and then in the notorious Triangle Shirtwaist Factory.

Newman had been exposed to radical ideas in her homeland, where one trade unionist commented that ‘behind every volume of the Talmud was a volume of Marx’. Still young, she argued against gender segregation in the synagogue and demanded the schooling that was often denied girls. Her political education continued in America through the pages of the mass circulation Yiddish-language socialist newspaper the Daily Forward, and in discussion groups that included some of the left luminaries of the time.

Pauline Newman was the epitome of ‘intersectionality’ long before the term was coined. She became known as ‘the East Side Joan of Arc’, combining housing activism with trade unionism, socialism, the fight for women’s suffrage, and gender and sexual equality. As a gay woman who raised a child with her partner and assumed a non-traditional style of dress, she lived in a way that challenged patriarchal orthodoxy, and died in 1986 after a lifetime devoted to the struggle that saw her go from ‘the garment shop floor to positions of influence in the American labour movement’, according to Annelise Orleck’s 1991 book Common Sense and a Little Fire.

The legacy and contemporary relevance of Pauline Newman abounds. Inspired by the 1907 rent strike, in November 1909, she helped build the International Ladies’ Garment Workers’ Union (ILGWU) and its ‘Uprising of 20,000’ against the exploitation of the textile industry. After two hours of indecision at a mass meeting at the Cooper Union, one of the workers, Clara Lemlich Shavelson, famously said, ‘I am tired of listening to speakers… I offer a resolution that a general strike be declared—now!’ Once again, the strikers’ demands were only partially met—but their women-led grassroots campaigning challenged both the employers and the male-dominated union hierarchy, leading to a wave of industrial action by textile workers across the US.

The tradition of working-class New Yorkers fighting for a better life extended beyond housing.  ILGWU members were also heavily involved in a succession of protests and boycotts against excessive food prices, beginning with a boycott of a Kosher butchers in 1902. As the New York Times put it, ‘when East Siders don’t like something, they strike’. In 1914, the ILGWU founded the Union Health Center to provide medical care to its members; they also promoted education projects in the same period, including a successful Workers’ University.

By March 1911, Pauline Newman was working with the US Socialist Party alongside Eugene Debs, when the Triangle Shirtwaist Factory fire killed 146 workers. The negligence of the factory’s bosses was yet another example of the corporate manslaughter that still puts working class lives at risk, from the sweatshops of Dhaka to Grenfell Tower. But the ILGWU kept up the struggle for better conditions, at work and at home. The union was part of a highly significant movement to build co-operative housing for New York City workers, several of which survive today: the Penn South development in central Manhattan, for example, was sponsored by the ILGWU, and continues to provide 2,820 truly affordable homes in the heart of one of the world’s most ucy

Rent strikes have been a recurring theme in New York City’s working-class history and a vital weapon in the ongoing fight for better housing conditions. As Ronald Lawson writes in the introduction to his history of the city’s tenant movement, ‘elites do not always have their way… ordinary people—working class and poor, women, immigrants, minorities—do help shape political agendas when they are organized and mobilized.’

This year has brought new evidence of this. With millions losing income and unable to pay rent during the pandemic, a huge increase in evictions and homelessness was threatened. But a vibrant, well-organised coalition of housing campaigners fought to ensure that the state of New York has been virtually eviction-free for eighteen months. This reversal of a cornerstone of capitalism is a remarkable achievement—one that has not yet been replicated in other places. It results from the same kind of assertive—and often women-led—mobilisation that Pauline Newman personified, including rent strikes. The early role of trade unions in building these movements was vital, too, and needs urgently to be revived.

Another recurring theme of housing and social justice movements in New York’s history is the role of radical Jewish socialists. Much of the city’s truly affordable housing was inspired and built by them. Sadly, the ILGWU fell foul to the red scares and infighting that have so often afflicted the US labour movement, and it’s a horrible irony that, as we remember the 1907-8 rent strike, the leadership of the UK Labour Party is busy purging itself of people following in the tradition of Pauline Newman.

In New York City today, the call for unity to defend workers at work and at home continues. Community Action for Safe Apartments (CASA) in the Bronx is just one of numerous tenant organisations fighting against the renewed threat of mass evictions, as Covid enters its second year. Some CASA members are on rent strike, demanding their landlord carries out repairs, and the organisation is spearheading a campaign demanding that the anti-eviction protections are extended for as long as the pandemic is with us.

Private landlords have filed 240,000 cases against New York tenants with rent arrears, threatening a huge spike in homelessness next year, particularly among the city’s poor people of colour and immigrants. It’s a situation Pauline Newman would instantly recognise. But CASA and others like them are determined to fight in a way she’d recognise, too.