The Real State Of The Union

Next time you hear Trump claiming credit for a “record-breaking” economy or “record low” unemployment rates, or someone trying to give Obama credit for this economic “recovery,” please know that they are citing outrageously fraudulent statistics. Quick facts…

Since the 60s, the government has been “tweaking” their methodology on economic statistics to hide poor results across the board. If we use old school legit methodology, the real unemployment rate is 21.7%, as opposed to the absurdly fraudulent 4% that is reported by the #FakeNews media & Trump.

Even if we only go back to the fraudulent methodology of January 2000, when the “unemployment rate” was also 4%, and compare it to January 2018, very basic math shows you that the fix is in…

Let’s look at the Labor Force Participation (LFP) Rate, which shows the percentage of the working-age population currently working, based on U.S. Bureau of Labor Statistics data…

So the Labor Force Participation Rate declined 4.6%, yet the unemployment rate stayed the same… hmm…

It gets much worse when you consider that roughly 12 million well-paying full-time jobs have been eliminated and replaced with either part-time or below “living wage” full-time jobs that do not provide healthcare benefits. 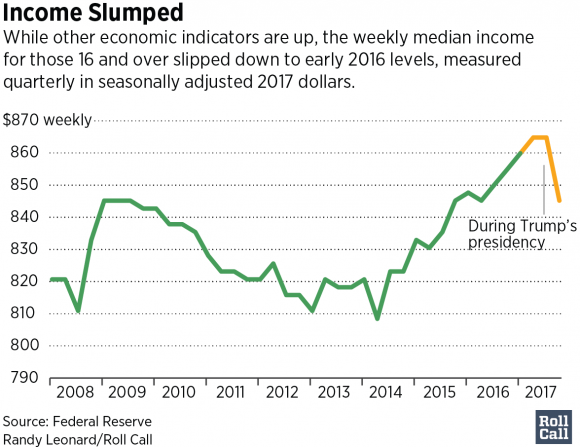 To be fair & balanced…

The Fake News media, Trump, Wall Street, the Global Private Military and the rest of the richest 0.1% are all experiencing all-time record-breaking wealth gains, no doubt about that.

In fact, when you look at overall wealth and factor in estimates of money hidden offshore, U.S. citizens now have enough wealth to average $1 million per U.S. household ($130 Trillion in overall wealth & 130 million households).

Wow, awesome news, we are all millionaires now!!

And in the last year, the richest 1% pulled in 82% of all wealth generated.

Also consider that the “poverty” rate is another outrageously fraudulent government statistic, with constantly “tweaked” methodology, which is built off the ultimate fraudulent statistic, aka the “inflation” rate.

When you compare the actual cost of living to income, 50% of the U.S. population is presently living in poverty.

Roughly 1/3 of the population has a negative net worth.

Only about 25% generate enough income to cover living expenses without taking on more debt.

Here are some stats on the Health of the Union…

• US healthcare expenditures per capita are double the OECD average and much higher than in all other countries. But there are many fewer doctors and hospital beds per person than the OECD average.

• US infant mortality rates are the highest in the developed world.

• Americans can expect to live shorter and sicker lives, compared to people living in any other rich democracy, and the “health gap” between the US and its peer countries continues to grow.

• The US has the highest prevalence of obesity in the developed world.

• America has the highest incarceration rate in the world. Its rate is nearly five times the OECD average.

• The youth poverty rate in the United States is the highest across the OECD with one quarter of youth living in poverty compared to less than 14% across the OECD. [based on the bogus methodology, actual number is significantly higher]

• According to the World Income Inequality Database, the US has the highest Gini rate (measuring inequality) of all Western Countries

It’s Feudalism 2.0: the indentured servant is now the indebted wage-slave.

Do you remember when one person could work from 9 a.m. to 5 p.m., Monday through Friday, and make enough money to support a family, get a nice house, nice car, solid social life, good schools, healthy food, affordable medical care, vacation time, retirement… the American Dream?

Yet, here we are, living in an unprecedented technological paradise with Godlike wealth and abilities.

Our healthcare systems are sick-care, prescription-addiction profit centers. GMOs in our food are yet another historically significant scandal of our time.

From for-profit prisons to the ever-growing surveillance state and private military complex… even the “higher” education system is now blatant debt peonage.

Our infrastructure has been neglected for far too long. The environment has been abused for far too long. We are dangerously addicted to fossil fuels to fuel our greed. Old-school bribery has been fully legalized, from campaign finance to lobbying to the revolving door in Congress.

How do we make the propagandized masses realize the consequences of all this?

How do we overcome the viscous, desensitizing, mind numbing repetition of the mainstream media and social algo bots, with all the hired bullshit, the paid divide & conquer propaganda, the distractions, all the noise?

How can we break through all the static?

David DeGraw published the above in Facebook. He concludes stating” If any propagandists posing as “politicians” or “economists” want to debate these numbers, I’m ready when you are.”