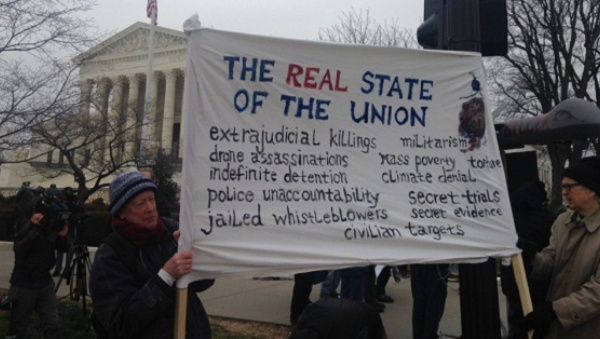 The Real State Of The Union

Obama said the U.S. is number one in the fight against climate change, when in reality the United States is by far the worst offender.

President Barack Obama used his final State of the Union speech to claim that, “America is leading the fight against climate change,” while in reality the United States is far and away the worst offender, per capita, in the ongoing mad race to render the earth’s climate uninhabitable. We “cut our imports of foreign oil,” Obama brags, as if earth cares what flag its pollution belches into the air under. “Gas under two bucks a gallon ain’t bad,” said the President, wildly missing the mark. Yes, it is bad, if you’re trying to preserve a livable planet, not just win cheap applause.

“I’m going to push to change the way we manage our oil and coal resources,” said the president. He made no mention of changing the way the U.S. government hands out subsidies to those industries.

The state of U.S. militarism also took a leap into an alternate reality. The President openly (if understatedly) bragged: “We spend more on our military than the next eight nations combined.” He was open about the global chessboard he’s playing on: “Russia is pouring resources to prop up Ukraine and Syria — states they see slipping away from their orbit.” And, somehow, “surveys show our standing around the world is higher than when I was elected to this office, and when it comes to every important international issue, people of the world do not look to Beijing or Moscow to lead — they call us.” They do? All people of the world? It’s just two years since a Gallup poll found the United States widely viewed around the world as the greatest threat to peace. When Russia and China vetoed war on Syria, much of the world wondered why they couldn’t have tried to save Libya.

The President claimed that U.S.-created Middle Eastern disasters he helped to exacerbate are “conflicts that date back millennia.” He also proposed — no joke — “winning” in “destroying” ISIS this year. Hmm. About closing that prison in Guantanamo and ending those wars in Afghanistan and Iraq … ? After years of taking credit for “ending” the war on Afghanistan, Obama has switched to not mentioning it.

Also gone missing: the U.S. Constitution. “With or without Congressional action, ISIL will learn the same lessons,” said this former “Constitutional law professor,” promising presidential war regardless of Congressional action. On Syria, Obama euphemized, “we’re partnering with local forces.” Is that what you call them now? He also opposed “calls to carpet bomb civilians” after he led the dropping of over 20,000 bombs on mostly Muslim countries just in the past year.

The supreme value in this speech, as in the presidential debates it mocked, was revenge: “When you come after Americans, we go after you. … [W]e have long memories, and our reach has no limit.”

1. How do you make a fair economy? (well not by bailing out the bankers and then coming out against them in a speech 7 years too late).

2. How do you make technology work, including on climate change? (what if the solution to climate change involves less technology? what if blaming technology and globalism for a bad economy overlooks the long-forgotten promises of the Employee Free Choice Act and the prize-winning marketing campaign of Obama 2008?)

3. How do you keep America safe and lead the world but not be the world’s policeman? (Has the world asked for a leader? Why isn’t cooperation an option?)

4. Can our politics reflect what’s best in us? (Whatever.)

After seven years of worsening climate, ocean, plutocracy, wars, blowback, surveillance, retribution for whistleblowers, secrecy, presidential power abuses, and drone murders, this is what you’ve got for us, Mr. President?

The lesson I take away is this: Pay little attention to 2016 campaign promises. Pay great attention to mobilizing the public pressure that has been missing for seven years.