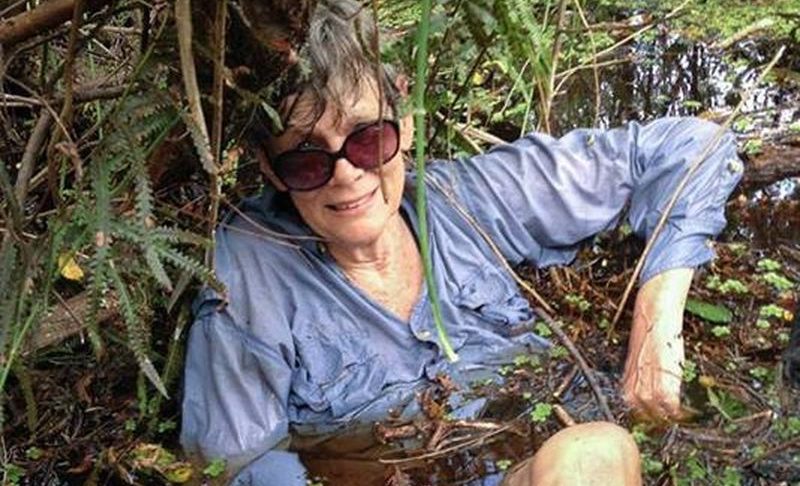 Above photo: Maggy Hurchalla is an environmentalist, a former four-term Martin County commissioner and the sister of Janet Reno, the late Attorney General. She also faces a $4.4 million judgment for attempting to block a developer’s plans for a rock mine near Lake Okeechobee. Carlton Ward.

Gov. Ron DeSantis and some other Florida Republicans are worked up over a perceived threat to the freedom of speech of politicians, but they’re ignoring a more significant threat to the public’s right to speak.

They’re upset that Facebook, Twitter, and other social media platforms have begun to suppress posts they deem flagrantly false or socially offensive, particularly those from their favorite ex-president.

But that isn’t a First Amendment issue. Those are private corporations, not government entities.

The legitimate First Amendment threat they are ignoring is the misuse of Florida’s courts to suppress and punish attempts by citizens to influence government agencies on issues involving public versus private interests.

At every level of appeal, including the U.S. Supreme Court, environmentalist Maggy Hurchalla found no relief from a $4.4 million SLAPP suit judgment that punished her attempt to stop a rock mining and water storage project in Martin County.

Florida has a law that’s supposed to prevent such cases, but she was sued before it took effect, and the law seems weak.

The high courts in both Tallahassee and Washington refused to hear her appeal despite strong support from both liberal and conservative organizations warning against the danger to the First Amendment.

Hurchalla, 79, the surviving sister of former U.S. Attorney General Janet Reno, won’t have to pay the judgment because she doesn’t have the money. But she persisted in her appeals because of the issue at stake.

A citizen wanting to object to, say, a developer’s permit to drain wetlands must now take care to misstate not a single fact, and to confine his or her objections to a public meeting or official correspondence. Otherwise, the business interest might file and win a lawsuit over “tortious interference.”

The trial judge and appeals court were incensed that Hurchalla sent personal e-mails to county commissioners who were friends of hers and over a factual error as to whether environmental studies had been completed on the project she opposed. There had been some, although they weren’t peer-reviewed.

Neither issue would have mattered had developer George Lindemann Jr., the owner of Lake Point Restoration, sued her for libel or slander. The precedents on defamation are far more tolerant of the public interest than Florida’s case law on tortious interference with a contract.

Another lesson is to remodel Florida’s anti-SLAPP law on a much stronger statute recently enacted in New York. The Public Participation Project, an entity that opposes SLAPP suits, gives New York’s a grade of A, but Florida gets only a C. Twenty-six states have even weaker laws or none at all.

Hurchalla’s objection was to a contract and a permit Lake Point Restoration had obtained to store water in a rock mine and sell it to West Palm Beach.

The legal system’s disdain for her case contrasted sharply with earlier precedents.

In 1984, the Florida Supreme Court overturned the $5,000 judgment that a jury and court had awarded to an English teacher who had been denounced to the school board by a parent upset over his son’s B grade.

The parent may have been negligent in his remarks, wrote then-Chief Justice Joseph A. Boyd Jr., but he still had the same right as the media “to discuss, comment upon, criticize, and debate” in his comments to the school board. That right required a certain latitude — what lawyers call privilege.

In 2008, the Florida Supreme Court banned the use of a cause of action called false light invasion of privacy because it was “largely duplicative of existing torts, but without the attendant protections of the First Amendment.” (The case, involving a Jewish woman’s claim that Jews for Jesus Inc., had falsely identified her as a believer, continued on other grounds before being dropped in 2014.)

Through their appointments, recent governors have steered Florida’s appellate courts on a hard-right course. There wasn’t even one dissent when the Fourth District Court of Appeal upheld the $4.4 million judgment and the Florida Supreme Court refused to review it. The U.S. Supreme Court denied review without comment.

It seemed to be a textbook example of a SLAPP suit. That stands for Strategic Lawsuits Against Public Participation, the subject of a state law passed in 2000 and amended in 2015.

But they are not “prohibited,” as the law’s title claims. One apparent weakness is that it protects only statements made “before” a governmental agency. And it entitles the defendant only to an intermediate ruling, with no deadline, on whether the suit was filed “primarily” over the defendant’s constitutional right of free speech. It also allows the award of legal fees to the prevailing party, which could mean the developer or agency suing the citizen.

The New York law, on the other hand, protects not only speech “in a place open to the public” or a “public forum,” but also “any other lawful conduct in furtherance of the exercise of the constitutional right of free speech in connection with an issue of public interest.”

“Public interest,” it adds, “shall be construed broadly, and shall mean any subject other than a purely private matter.”

Moreover, all proceedings must stop until a court has ruled on a defendant’s motion to dismiss the suit. That halts the costly process of taking pre-trial depositions.

The potential legal expense is often enough to make citizens abandon protests in the face of actual or threatened SLAPP suits, especially if the entity filing or threatening suit is a utility or development corporation with deep pockets.

New York’s superior law is an excellent model for the Florida Legislature to copy.

Editorials are the opinion of the Sun Sentinel Editorial Board and written by one of its members or a designee. The Editorial Board consists of Editorial Page Editor Rosemary O’Hara, Dan Sweeney, Steve Bousquet and Editor-in-Chief Julie Anderson.