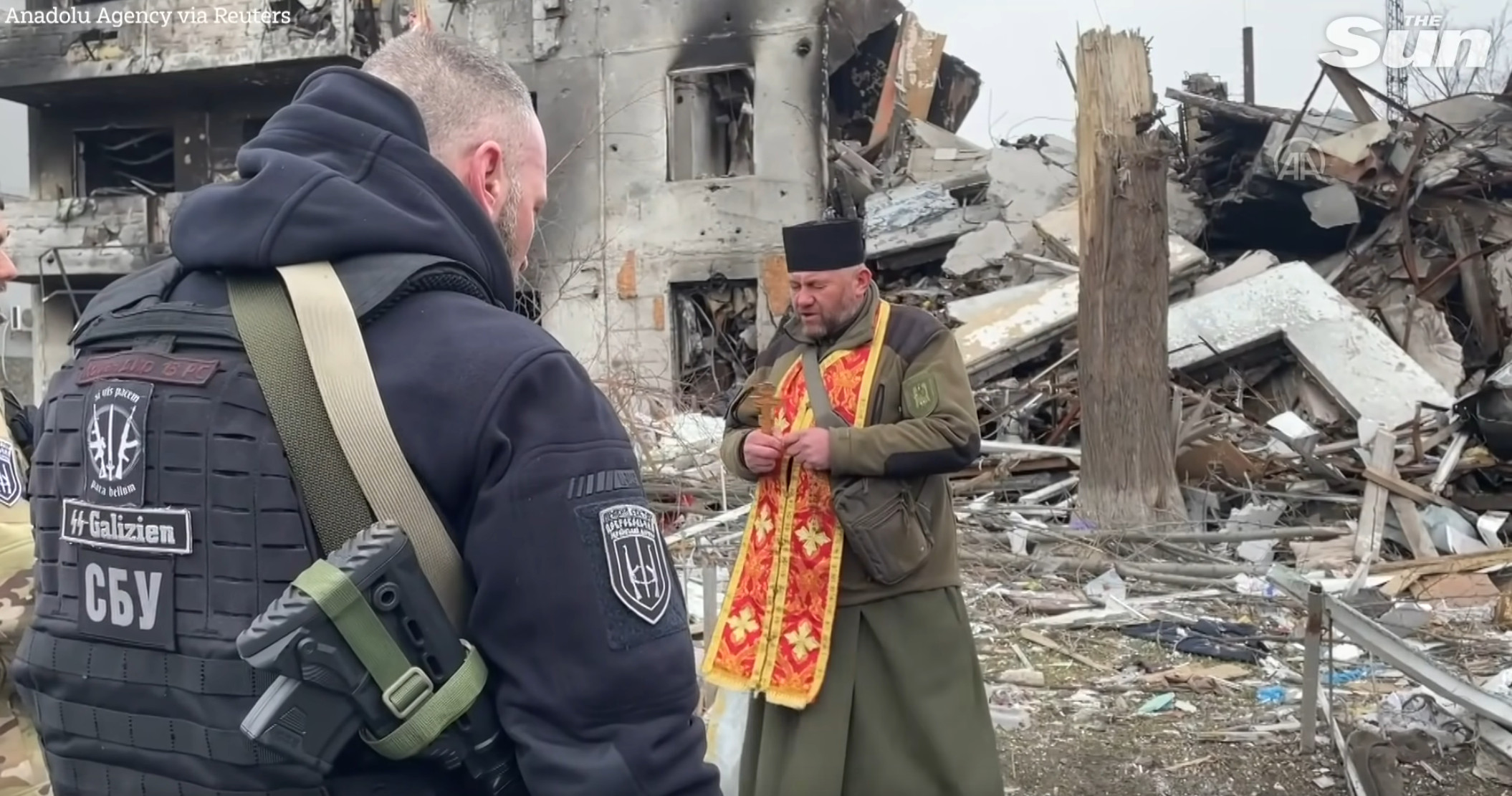 The Reasons For And Dangers Behind The War In Ukraine

The war in the Ukraine continues but the propaganda hysteria around it seems to have calmed down a bit as reality is setting in.

This gives room from more sane voices to be heard by the public. I will start with the Russian ones.

The Russian ambassador to the U.S., Anatoly Antonov, was interviewed by Newsweek. He explained Russia’s political and judicial reasoning behind the war:

“The special operation in Ukraine is the result of the unwillingness of the Kiev regime to stop the genocide of Russians by fulfilling its obligations under the international commitments,” Antonov told Newsweek. “The desire of the NATO member states to use the territory of a neighboring state to establish a foothold in the struggle against Russia is also obvious.”

“The NATO member countries have commenced a military exploration of Ukraine,” Antonov said. “It was flooded with Western weaponry while President Vladimir Zelensky announced Kiev’s plans to acquire nuclear weapons which would threaten not only neighboring countries, but also the entire world.”…”In this context, Russia had no other choice but to recognize the independence of the Donetsk and Lugansk People’s Republics,” Antonov said. “Then, in accordance with Chapter VII, Article 51 of the U.N. Charter, with the authorization of the Federation Council of Russia and in execution of the Treaties of Friendship and Mutual Assistance with the Donetsk People’s Republic and the Lugansk People’s Republic, President of the Russian Federation Vladimir Putin made a decision to begin a special military operation.”

“Its aim is to demilitarize and denazify Ukraine in order to reduce military threats posed by the Western states that are trying to use the fraternal Ukrainian people in the struggle against the Russians,” he added.

Sergey Karaganov is a high level Russian political scientist and commentator who is also a presidential advisor in Moscow. He was interviewed (in English) by the Italian Corriere Della Sera

Sergey Karaganov: «We are at war with the West. The European security order is illegitimate»

How can an attack be justified on such grounds?

«For 25 years people like myself have said that NATO expansion would lead to war. Putin said several times that if it came to Ukraine becoming a member of NATO, there would be no Ukraine anymore. In Bucharest in 2008 there was a plan of quick accession of Ukraine and Georgia to NATO. It was blocked by the efforts of Germany and France, but since that time Ukraine has been integrated into NATO. It was pumped up by weaponry and its troops were trained by NATO, their army getting stronger and stronger day by day. In addition we saw a very rapid increase of neo-Nazi sentiment especially among the military, the society and the ruling elite. It was clear that Ukraine had become something like Germany around 1936-1937. The war was inevitable, they were a spearhead of NATO. We made the very hard decision to strike first, before the threat becomes deadlier».

I recommend to read the whole Karaganov interview to better understand the Russian thinking.

“It was clear that Ukraine had become something like Germany around 1936-1937,” said Karaganov. The ‘western’ public has difficulties to understand that. But it is the prevailing Russian view and when analyzing the developments in the Ukraine over the last years with Russian history in mind one can easily come to the same conclusion.

It is also what the Canadian Russia expert Patrick Armstrong had mentioned as the most important item after he had read Putin’s speeches at the start of the war:

Had I been at home I would have read Putin’s speech earlier and understood sooner.

What he is talking about is what the Soviet Union tried to do from 1933 onwards: namely to stop Hitler before he got started. This time Russia is able to do it by itself. In other words, Putin feels that he is making a pre-emptive attack to stop June 1941.

The Russian view is not really that far fetched.

Here is a recent news agency video of officials of the Ukrainian Security Service SBU in front of a destroyed house seemingly praying with a priest for the deceased.

Note the fascist Right Sector patch the official carries on his arm and back. The SBU has become a kind of Gestapo tasked with eliminating opposition elements in Ukraine. The UN’s OHCHR, the OSCE, Human Rights Watch, Amnesty International have all reported about the SBU’s many crimes.

There is also an ‘SS Galizien’ patch on the officers back which refers to the 14th Waffen Grenadier Division of the SS (1st Galician) which fought with Nazi-Germany against the Soviet Union. Like many other SS division the 1st Galician was involved in serious war-crimes but later mostly whitewashed. After the war many of its surviving officers fled to Canada and to the United States.

The offspring of those officers and other immigrants from the Ukraine played a noticeable role in lobbying for the war.

That has been successful as the U.S. had chosen to support extreme elements in Ukraine in opposition to peace. This has, as Aaron Maté writes, moved president Zelensky from an election campaign position of finding peace with Russia to becoming a war maniac:

On a warm October day in 2019, the eminent Russia studies professor Stephen F. Cohen and I sat down in Manhattan for what would be our last in-person interview (Cohen passed away in September 2020 at the age of 81).

Peace could only come, Cohen stressed, on one condition. “[Zelensky] can’t go forward with full peace negotiations with Russia, with Putin, unless America has his back,” he said. “Maybe that won’t be enough, but unless the White House encourages this diplomacy, Zelensky has no chance of negotiating an end to the war. So the stakes are enormously high.”…Although Trump’s impeachment failed to remove him from office, it succeeded in cementing the proxy war aims of its chief proponents: rather than support Zelensky’s peace mandate, Ukraine would instead be used to “fight Russia over there.”

I had earlier quoted an interview with Dmytro Yarosh, then the leader of the fascist Right Sector, who just a week after Zelenski had become president threatened him with death should he try to make peace with the eastern Ukrainian rebels. Yarosh later became an advisor to the chief general staff of the Ukrainian military. He is the main person behind the ongoing nazification of the Ukrainian military.

As ambassador Antonov has said the war in Ukraine is not only about the Ukraine.

Richard Falk, Professor Emeritus of International Law at Princeton University, is correctly pointing out the two levels of the war we see:

It is not that the empathy for Ukraine or support for Zelensky’s national resistance is misplaced, but that it has the appearance of being geopolitically orchestrated and manipulated in ways that other desperate national situations were not, and thus gives rise to suspicions about other, darker motives.

This is worrisome because these magnified concerns have acted as a principal way that the NATO West has gone out of its way to make the Ukrainian War about more than Ukraine. The wider war is best understood as occurring on two levels: a traditional war between the invading forces of Russia and the resisting forces of Ukraine as intertwined with an encompassing geopolitical war between the US and Russia. It is the prosecution of this latter war that presents the more profound danger to world peace, a danger that has been largely obscured or assessed as a mere extension of the Russia/Ukraine confrontation….If this two-level perception is correctly analyzed in its appreciation of the different actors with contradictory priorities, then it becomes crucial to understand that in the geopolitical war the US is the aggressor as much as in the traditional war on the ground Russia is the aggressor.

Falk concurs with professor John Mearsheimer who fears that the larger U.S. Russia conflict hidden behind the war in Ukraine may lead to widening of the conflict into a potential nuclear war.

Speaking at an April 7 webinar, Mearsheimer was, true to form, “offensively realistic”. He explained: (1) the root cause lies in the April 2008 NATO summit Declaration that Ukraine (and Georgia) “will become members of NATO”; and (2) that

Russia sees this as an “existential threat” and therefore “must win” this one.

For President Joe Biden and the Democrats, even though Ukraine poses zero strategic threat to the U.S., a Russian “win” would be, politically, a “devastating defeat”, says Mearsheimer. In that sense, the conflict is a “must-win” for the US as well. Underscoring the obvious, he noted it is impossible for both sides to “win” – at least not in current circumstances….Noting that US academics and policy makers don’t believe NATO’s designs on Ukraine represent an existential threat to Russia, Mearsheimer is as blunt as his courteous mien permits. “What people in Washington believe is irrelevant. What matters is what Russia believes.” He rejects the “mainstream” view that Putin’s Russia is motivated by expansionist aims, and asks the savants in Washington to put concrete evidence behind their claims. Moreover, “There is no evidence in what Putin has said that he wants to make Ukraine part of Russia,” Mearsheimer adds.

Towards the end of a talk with Gonzalo Lira former Marine officer and UN Inspector Scott Ritter disputes the potential for escalation. The Pentagon, he says, knows the real situation on the ground and that the Ukrainian army will lose the war. Neither NATO, nor the U.S. nor single countries like Poland have their forces configured in a way that would allow them to successfully wage war against Russia. They would need more time to get ready than Russia will need to win the war in Ukraine.

Ritter predicts that the Pentagon will overrule any escalation the Ukraine warmongers in the State Department and National Security Council may plan and that those responsible for the current mess, Victoria Nuland, Anthony Blinken and Jake Sullivan, will get silenced or removed after the midterms.

I hope he is right.