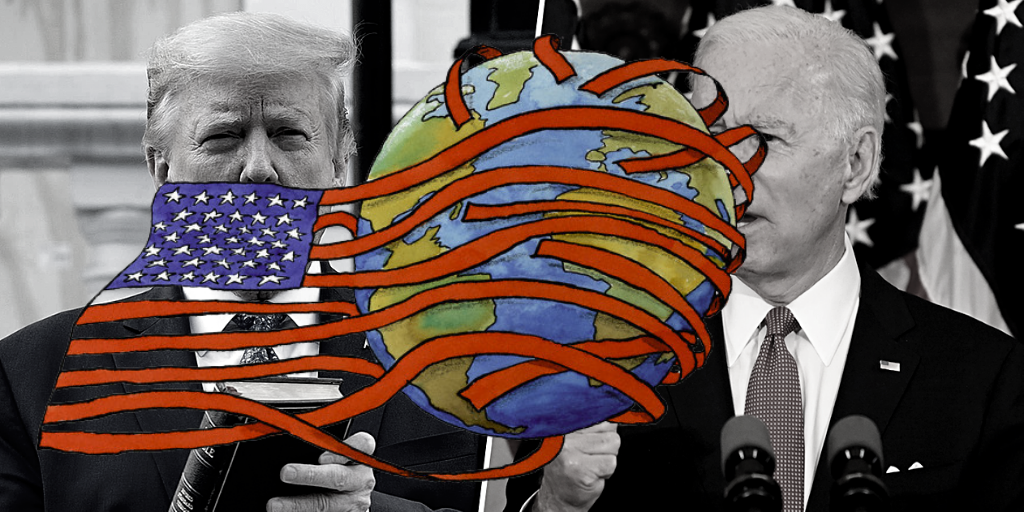 The Red Nation Statement On US Elections

Above photo: Photos by Gabriella Marks.

The recent US election highlights the widespread disgust of the type of in-your-face white supremacy exemplified by Donald Trump. The large voter turnout, especially among Black and Indigenous working poor showed that large sections of the population reject his politics.  But it also underscores the extensive support for those very same politics from a significant share of the population. Trumpism is not going away anytime soon.

Thus, while Trump’s defeat is cause for celebration, the roots of white supremacy in the United States are deep and must be confronted. These roots sprout not only fiends like Donald Trump, but a whole political establishment in the service of settler colonialism and world domination. A Biden presidency means a continuation of the very same neoliberal policies that brought us Donald Trump to begin with. These are the politics of war and aggression abroad, and of austerity and police repression at home.

US imperialism is in crisis. This drives the capitalist system towards austerity, increased suffering among the working poor, repression at home and imperialist aggression, subversion and wars abroad. This is not something new and is not something that Trump created in the last four years, although he intensified it. Obama also intensified the suffering, the repression and US aggression abroad during his administration.

We can expect more people to die of coronavirus, the threat of mass evictions and utility shutoffs, long-term unemployment, and a great deal of suffering. In the last week we have seen record numbers of daily cases. We also know that once a vaccine is released, a significant portion of the United States will refuse it or not be able to access it. The health and economic effects of this will impact most who it always does, poor Black and Indigenous communities and other oppressed peoples.

A false optimism about Biden abandoning his service to corporate interests or being “pushed” by social movements to enact meaningful reforms such as universal health care is unrealistic. He has already rejected that approach. His selection of Kamala Harris for vice-president underscores his enduring commitment to the carceral state. Presumptive Biden cabinet members under consideration point in the same direction. One of them is Michele Flournoy who helped engineer the political and humanitarian disasters in Libya and Syria and a new escalation of the war in Afghanistan during the Obama administration. Another is former Obama National Security Advisor and Ambassador to the United Nations Susan Rice, who was an enthusiastic promoter of the Iraq invasion which murdered a million human beings.

Appointing women and minority politicians to serve the US imperial establishment is not progress. Representational politics that advance imperialist and neoliberal agendas do not serve the interests of the working masses of Black and Indigenous people, nor of women. They only end up reinforcing those very same agendas by creating the illusion of progress in the form of an elite minority stratum, aligned with settler-colonialist capitalist class politics. As such, they are counter-revolutionary politics.

The forces of progress and a better future reside elsewhere. The recent upsurge of anti-racist struggle after the murder of George Floyd has put into evidence to millions of people the powerful forces arrayed against the racist US capitalist/imperialist system. It has also brought clarity to vast numbers of people in this country about the systemic racism that is part and parcel of the US state. This vast movement took up the call to defund the police and caused abolitionist politics to enter mainstream political discourse. We saw in practice that it is the masses of the oppressed who constitute the only force that can bring down this unjust system.

At the same time, we saw the US state, with its police forces unleash fascist violence against the rising movement to crush it. And we saw the support and collaboration of the police with fascist right-wing militias who have murdered several demonstrators, with Trump encouraging the fascist militias. We saw the police continue to kill Black and Indigenous people with complete impunity during the upsurge.

We must remember that Biden has already sought to distance himself from the Black Lives Matter movement in order to win white conservative votes. We can only expect more of the same. Both the Democratic and Republican party will remain the enemies of Black and Indigenous liberation.

The state will continue to unleash repressive violence against the ongoing movement and the revolutionary forces. The internal contradictions of the capitalist/imperialist system, between the capitalist parties and within the ruling elite, as well as the growing dissatisfaction of the masses, and the ongoing economic crisis of the imperialist system, are bound to produce a growing repressive state apparatus.

The US is an empire. And the crisis of imperialism drives this system towards aggression and war abroad to satisfy the capitalist thirst for profits. We salute our comrades in Bolivia who have defeated the US led coup against former socialist president Evo Morales. The US working people, Black and Indigenous working poor, are a contingent of this worldwide opposition to the US machinery of death and destruction.

With any crisis there is revolutionary opportunity. We don’t just “make” revolution, it has to be manufactured. It has to be organized. It will not be a continued uprising in the streets. An insurrectionist approach, while valid in its expression, is unsustainable.

What is the way forward? The change that we need requires that the masses of people in this country grasp that capitalism cannot be reformed and that it is headed into ever deeper systemic crisis. Poverty, climate change, police repression, state surveillance, are systemic problems. Already this understanding is reaching larger sections of the population, especially among the most oppressed. Calls for defunding and even abolishing the police spread quite broadly last summer. Steps in that direction are being taken up throughout the country and organized by various groups. These steps weaken the repressive apparatus and allow for broader democracy.

This understanding of the actual social reality in the US is key to building the forces needed to change it. The battle of ideas against the ideology of greed and individualism, and the need for communal organization are key. Communalization is both an Indigenous legacy and an ongoing set of practices that the US settler colonial project has tried to destroy from its inception. But these efforts to maintain a different world endure and point us all, Indigenous and non-Indigenous, towards a better future. Indigenous peoples, peoples of tribal nations, peoples of Maroon communities, peoples of the land have lived before capitalism and against capitalism. They have cultivated relations with each other and the land that do not rely on conquest and surplus but bring abundance and joy and dignity to all. These communal forms should be developed and become schools for freedom. We call these schools for Indigenous socialism. Join us in the struggle to create a better future.