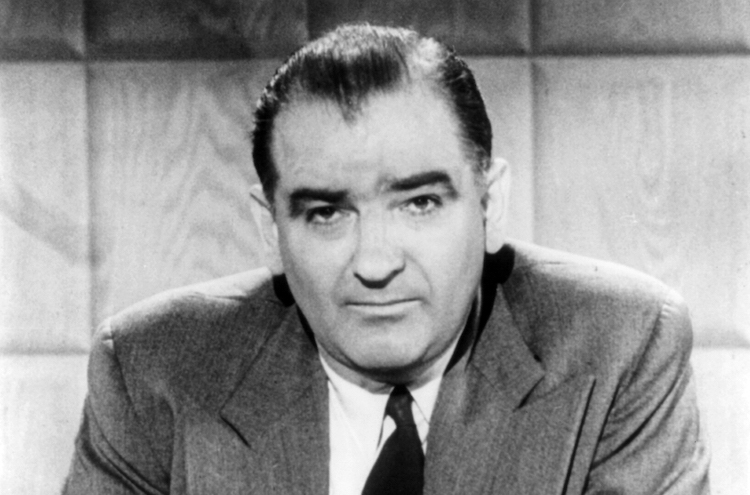 New York City, New York – In 1954 I attended Queens College during the years before Senator Joseph McCarthy finally met his comeuppance at the Army-McCarthy hearings after terrorizing Americans for years with accusations of disloyal communists, waving lists of blacklisted citizens, threatening their lives, their employment, their ability to function in society because of their political affiliations.

In the college cafeteria, we were discussing politics when one student thrust a yellow pamphlet into my hands.   “Here you should read this.”  I glanced at the title. My heart skipped a beat as I saw the words “Communist Party of America.”  I hastily stuffed it unopened into my bookbag, took the bus home, rode the elevator to the 8th floor, walked directly to the incinerator, and tossed the pamphlet down the chute, unread, before I entered my apartment.  I certainly wasn’t about to be caught red-handed.  The red scare had gotten to me.

I had my first glimmer of “the other side of the story” about communism in 1968, living in Massapequa, Long Island, a suburban housewife, watching Walter Cronkite reporting on the Vietnam War.  He ran old news film of a slender, boyish Ho Chi Minh meeting with Woodrow Wilson in 1919, at the end of World War I, seeking US help to end the brutal French colonial occupation of Vietnam.  Cronkite reported how Ho had even modeled the Vietnamese Constitution on ours.  Wilson turned him down and the Soviets were more than happy to help.  That’s how Vietnam went Communist. Years later, I saw the film Indochine, dramatizing the cruel French enslavement of Vietnamese workers on rubber plantations.

Later that day, the evening news showed a mob of students at Columbia rioting on campus, barricading the University Dean in his office, shouting anti-war slogans and cursing at Columbia’s business and academic connections to the Pentagon.  They didn’t want to be drafted into the immoral Vietnam War!   I was terrified.  How could this utter chaos and disorder be happening right here at Columbia University in New York City?

This was the end of my world as I knew it!  I had just turned thirty and the students had a slogan, “Don’t trust anyone over thirty”. I turned to my husband, “What’s the matter with these kids?  Don’t they know this is America? Don’t they know we have a political process?  I’d better do something about this!”   The very next night, the Democratic Club was having a debate at Massapequa High School between the hawks and the doves on the Vietnam War.  I went to the meeting, brimming with righteous certainty about the immoral stand we had taken and joined up with the doves where we organized Eugene McCarthy’s Long Island campaign for the Democratic presidential nomination to end the war.

McCarthy lost his 1968 bid in Chicago and we formed the New Democratic Coalition all across the country—going door to door without benefit of any internet and actually won the 1972 Democratic nomination for George McGovern in a grassroots campaign that shocked the establishment!  This was my first painful lesson about how biased the mainstream media is against the anti-war movement. They never wrote anything positive about McGovern’s program to end the war, women’s rights, gay rights, civil rights. They hounded him for nominating Senator Thomas Eagleton for Vice President, who years earlier had been hospitalized for manic depression. He finally had to replace him on the ticket with Sargent Shriver.   He only won Massachusetts and Washington, DC. After that, the Democratic Party bosses created a whole host of “super-delegates” to control who could win the nomination and prevent that kind of extraordinary grassroots victory from ever happening again!

In 1989, having become a lawyer after my children were grown, I volunteered with the Lawyers Alliance for Nuclear Arms Control and visited the Soviet Union, with the New York Professional Roundtable delegation. It was an earth-shattering time to visit Russia. Gorbachev had just begun to implement his new policy of peristroika and glasnost—reconstruction and openness.  The Russian people were being directed by the communist state to experiment with democracy. Posters hung from shops and doorways up and down the streets of Moscow proclaiming democracy—democracia—urging people to vote.

Our New York delegation visited a magazine,  Novasty—Truth— where the writers explained that under perestroika, they recently voted to select their editors.  At a tractor factory in Sversk, 40 miles from Moscow, our delegation in the factory conference room were asked whether we preferred to begin with questions or hear a talk. As we raised our hands to vote, the local townspeople in attendance began whispering and tittering “Democracy! Democracy”!   My eyes filled with tears at the surprise and wonder that our casual show of hands evoked in our Russian hosts.

The painful, searing vision of the cemetery of mass, unmarked graves in Leningrad haunts me still. Hitler’s siege of Leningrad resulted in nearly one million Russian deaths. On every street corner it seemed, memorial statutes paid tribute to some part of the 27 million Russian who died in the Nazi onslaught. So many men over sixty. who I passed in the streets of Moscow and Leningrad, had their chests bedecked with military medals from what Russians called the Great War. What a beating they took from the Nazis—and how prominent a part it still plays in their culture today as the tragic Ukrainian chaos unfolds.

At one point, my guide asked, “Why don’t you Americans trust us?” “Why don’t we trust you?”  I exclaimed, “What about Hungary?  What about Czechoslovakia?” He looked at me with a pained expression, “But we had to protect our borders from Germany!” I looked into his watery blue eyes and heard the fervent sincerity in his voice. At that moment, I felt betrayed by my government and the years of constant fearmongering about the communist threat. The Russians were in a defensive posture as they built their military might. They used Eastern Europe as a buffer against any repetition of the ravages of war they had experienced at the hands of Germany.  Even Napoleon had invaded straight through to Moscow in the previous century!

It’s clear that we’re creating bad will and hatred again with the unseemly expansion of NATO, despite Regan’s promises to Gorbachev that it wouldn’t expand “one inch to the east” of Germany, while keeping nuclear weapons in five NATO countries, placing missiles in Romania and Poland, and playing war games, including nuclear war games, on Russia’s borders. Small wonder that our refusal to deny NATO membership to Ukraine has been met by the current awful violent onslaught and invasion by Russia.

It is never mentioned in the unrelenting media assault on Putin and Russia that at one point, Putin, despairing of ever being able to halt the eastward expansion of NATO, asked Clinton if Russia could join NATO. But he was rejected as were other Russian proposals to the US to negotiate for the elimination of nuclear weapons in return for giving up missile emplacements in Romania, to return to the ABM Treaty and the INF Treaty, to ban cyberwar, and to negotiate a treaty to ban weapons in space.

In a Matt Wuerker cartoon Uncle Sam is on a psychiatrist’s couch fearfully clutching a missile saying, “I don’t understand—I have 1800 nuclear missiles, 283 battleships, 940 planes. I spend more on my military than the next 12 nations combined. Why do I feel so insecure!”  The psychiatrist answers: “It’s simple. You have a military-industrial complex!”

What’s the solution?  The world should issue a call for sanity!!****

Call for a Global Peace Moratorium

CALL FOR A GLOBAL CEASEFIRE AND A MORATORIUM on any new weapons production—not one more bullet– including and especially nuclear weapons, let them rust in peace!

FREEZE all weapons manufacturing and fossil, nuclear, and biomass fuels manufacturing, the way nations geared up for WWII and stopped most domestic manufacture to make weapons and use those resources to save the planet from catastrophic climate destruction;

START A GLOBAL PROGRAM of sustainable farming–plant tens of millions of more trees, put rooftop gardens on every building and city vegetable patches on every street;

ALL WORK TOGETHER ACROSS THE GLOBE to save Mother Earth from nuclear war and catastrophic climate devastation! [IDN-InDepthNews – 02 April 2022]