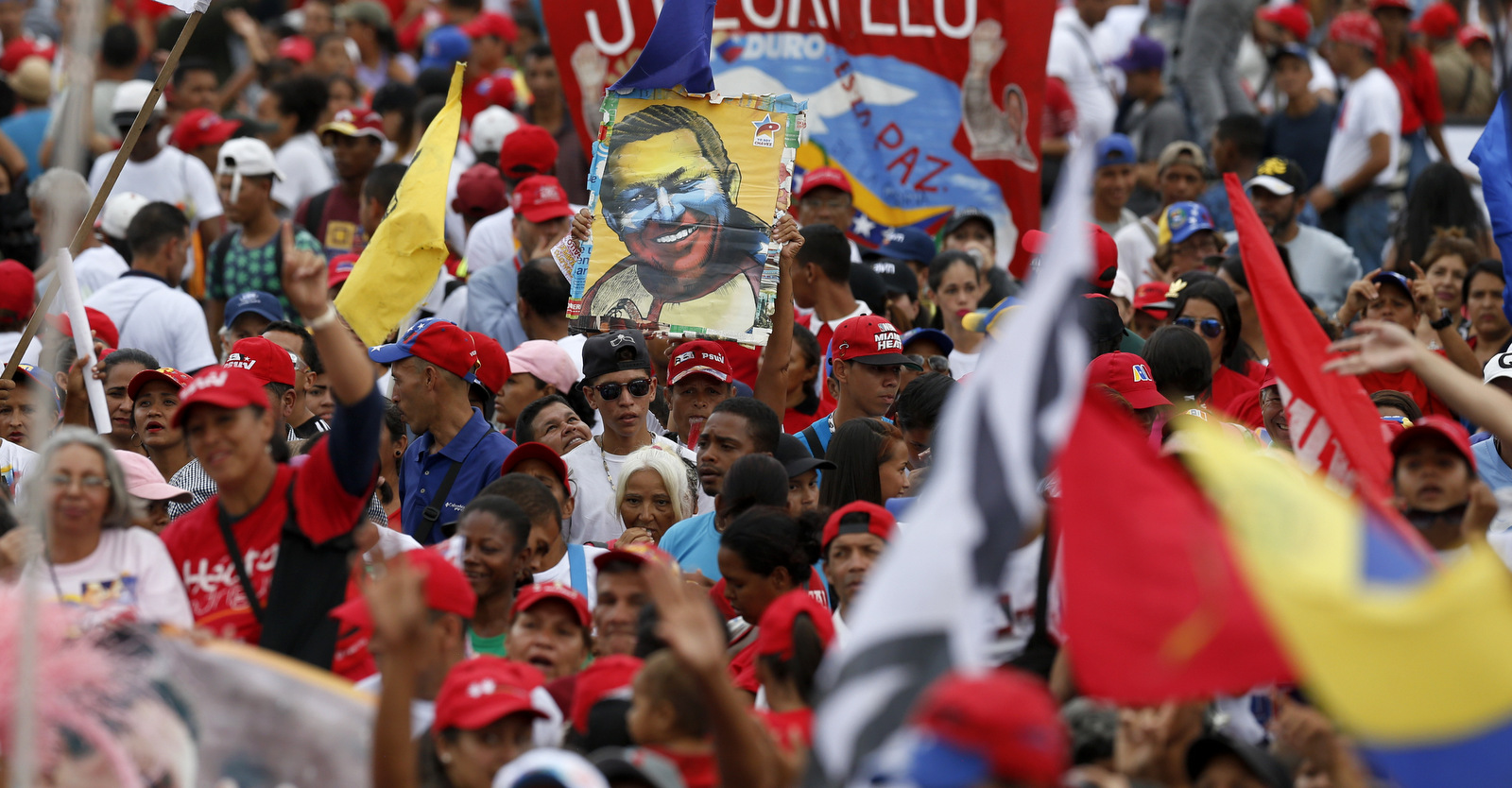 The Reelection Of Maduro – Venezuelan Voters Defiant Answer To US Empire

The Venezuelan people reelected Nicolas Maduro for a second presidential term on May 20. A US-backed political tide of reaction had been bucked, which had swept away previously left-leaning Latin American governments – often by extra-parliamentary means – in Brazil, Argentina, Chile, Paraguay, Honduras, and even Ecuador.

The US and the right-wing opposition in Venezuela had demanded an election boycott and Maduro’s resignation. Defying them, the popular classes voted as a form of resistance in what they proudly told us was a “celebration of democracy.” Hugo Chávez’s Bolivarian Revolution was again affirmed as was Chávez’s successor, Nicolás Maduro.

Hugo Chávez was first elected in 1998 and died in office on March 5, 2013. Many Venezuelans grieved deeply and personally; some rejoiced; no one was untouched.

Chávez had spearheaded a movement that turned Venezuela from an epigone of Washington to an independent force opposing US global hegemony. The Bolivarian Revolution reclaimed Venezuela’s history and forged a new national identity that no longer looked to Miami for affirmation. Even the most anti-chavismo now take pride in being Venezuelan, such is the depth of the sea change in national consciousness. 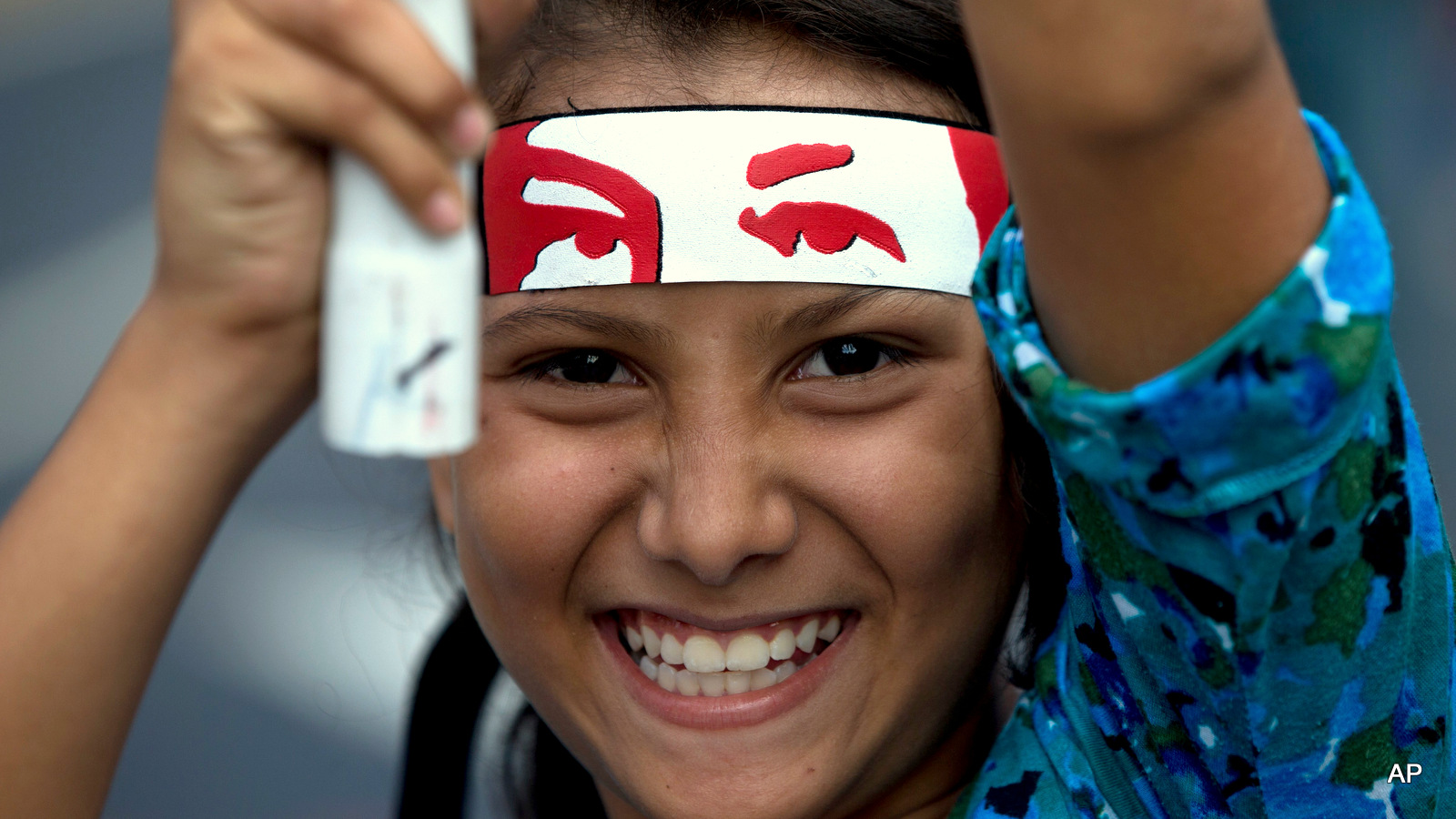 A Maduro supporter wearing a head band with the image of Venezuela’s late President Hugo Chavez’s eyes, waves a national flag during a rally in Caracas, March 12, 2015.

Venezuelan society became more inclusive for the poor, especially women, people of color, and youth. Of the 300-odd mayoralties in Venezuela, over 100 mayors are under 30 years old. As Greg Grandin observed, this inclusiveness has awakened “a deep fear of the primal hatred, racism, and fury of the opposition, which for now is directed at the agents of Maduro’s state but really springs from Chávez’s expansion of the public sphere to include Venezuela’s poor.”

On a geopolitical level, the Bolivarian Revolution placed a renewed focus on the socialist project. While some in the international left have become confused on anti-imperialism, Uncle Sam has been clear and has made regime change in Venezuela a priority.

Maduro inherited all this and more: a dysfunctional currency system, deeply engrained corruption, an entrenched criminal element, a petro-economy dependent on the international market, and the eternal enmity of Washington.

The Venezuelan people first elected Maduro president on April 14, 2013, in a nation still reeling from the death of Chávez just five weeks previously, after snap presidential elections were called according to the constitution.

Chávez was bigger than life when he was alive. In death Chávez emerged even larger. Even for the 6’ 3” former bus driver and union leader, these were very big shoes for Maduro to fill.

In graffiti in working-class neighborhoods and on red tee-shirts worn by the chavista faithful, the slogan of the 2013 election was Yo Soy Chávez (I am Chávez). Maduro had been Chávez ’s foreign minister starting in 2006 and the vice president and then Chávez ’s designated successor by 2012.

But talking to Venezuelans back then, Maduro was an unknown quantity. They had, as many expressed, lost a father. They did not know the son, as Maduro himself characterized his relationship to his mentor.

The death of Chávez was a traumatic moment for the Venezuelan people, and an opportunity not to be missed by the US empire and its acolytes to roll back the Bolivarian Revolution. Feet held to the fire, Maduro never had a grace period. Nor did Maduro ever waver or show fear.

The main opposition candidate in 2013, Henrique Capriles, appeared on national TV within moments of the announcement of Maduro’s election victory and declared the election a fraud. He then called upon the Venezuelan people to “express their rage.”

What ensued was the opposition incited violence (guarimbas) of 2013, followed by the 2014 wave of escalated violence, and then the even more destructive violence of 2017. Mainly confined to middle-class opposition neighborhoods, the violence destroyed billions of dollars of public property including buses and public transportation facilities, health clinics and hospitals, schools and universities.

Even more inestimably costly have been the human lives. Over one hundred have perished in the violence: some opposition, more Chavistas, and many bystanders. In the most recent round of violence, the most extreme opposition elements have even burned suspected (because of dark skin) Chavistas alive.

Capriles’ sore loser reaction was entirely predictable. Every politically engaged Venezuelans that we met in 2013 knew that this election would be declared fraudulent by the opposition and the US if Maduro won.

The game plan (see for example here) for the US and its funded opposition is:

US-aligned big business in Venezuela has contributed to the opposition offensive by creating selective shortages in consumer goods as part of what has become known as the economic war. While liquor stores are fully stocked, according to a young woman from the state of Táchira bordering Colombia, items such as feminine hygiene products and diapers are scarce, targeting the grassroots Chavista leadership, which is mainly female.

The US for its part declared Venezuela an “extraordinary national security threat” in 2015 and has since piled on ever-increasing economic sanctions. US-led diplomatic efforts have been designed to isolate Venezuela and further pressure Maduro simply to give up and resign.

After Maduro’s accession to the Venezuelan presidency, international petroleum prices plummeted, dealing a near decisive blow to the country’s economy. Revenues from petroleum sales fund the vast social programs of the Bolivarian Revolution, as well as paper over the economic inefficiencies that Maduro had inherited and the outright mistakes and corruption of his own watch.

Corruption within the ranks of Chávismo has been a target of both the opposition’s critiques and the efforts of Maduro. Yet for Maduro, there has been no winning for trying. When Maduro attacks corruption in his own ranks, he is accused of being authoritarian. His former attorney general Luisa Ortega Díaz, who was removed for corruption, has been elevated to a political martyr.

Under normal conditions, Maduro’s prospects for reelection in 2018 would have looked dismal. Venezuela was experiencing hyper-inflation, GDP growth was negative, and critical shortages were prevalent. The US and its hemispheric allies in the anti-Venezuelan Lima Group were trying to invoke the charter of the Organization of American States (OAS) militarily to intervene in Venezuela based on a “humanitarian crisis.”

While hardship today in Venezuela is undeniable, it does not rise to a level of humanitarian crisis. That’s the fake news. We could plainly see well-stocked stores and lively commerce.

The real news is that even though Venezuela has the funds to buy vital medicines and food stuffs, such efforts are being blocked by illegal US, Canadian, and European Union sanctions. In other words, the enemies of Venezuela are trying to make fake news true by hypocritically condemning the very conditions they are exacerbating.

The rightwing opposition is united in their class antipathy to the main beneficiaries of the Bolivarian Revolution: the poor and working people of Venezuela. But the opposition, despite assistance from the US, is divided over whether to try to overthrow Maduro by illegal means or electorally.

The opposition has won only two of some two-dozen major national elections since 1998, which is its basis for them calling a “dictatorship” what former US President Jimmy Carter called the best electoral system in the world.

When the opposition won in the National Assembly elections in December 2015, they had no program to address the dire economic problems facing the country. Instead, they passed an amnesty law, which candidly enumerated the illegal activities they had engaged in such as narco-trafficking, perpetrating coups, and terrorism.

A constitutional stalemate between the opposition-dominated National Assembly and the Chavista-dominated Supreme Court then paralyzed governance. Maduro exercised a constitutional provision to call for a national election to create a Constituent Assembly with power over both warring branches of government. The Chavista electoral victory in July 2017 so demoralized the already divided opposition, that they ceased mounting violent actions. Venezuela has enjoyed relative domestic peace since.

Meanwhile, the Maduro government has proven resilient responding to the challenges, while still maintaining and even extending core social programs such as building two million housing units for the poor. Measures taken include creating the Petro crypto-currency, revaluing the regular currency, distributing food through the CLAP program, setting up subsidized trucks selling arepas (Venezuelan equivalent of the taco), diplomatically forging closer relations with China and Russia, and most of all relying on the strength of the Chavista base.

The Opposition to Maduro’s Second Election

First, the US and the Venezuelan opposition accused Maduro of not calling a presidential election. Maduro called the election, and then they accused him of setting too early of a date. In on-again-off-again negotiations with elements of the opposition, the election was moved to a later date and then again to a still later date, settling on May 20, 2018.

The US and the main opposition coalition, Mesa de la Unidad Democrática (MUD), instead called on Maduro to call off elections and resign. They would boycott claiming, in effect, any election they can’t win must be fraudulent. The opposition, discrediting itself, called for yet more punishing US sanctions on their own people and echoed the US in threatening a coup, all in the name of “restoring democracy.”

Henri Falcón broke ranks with the MUD and ran a weak campaign against Maduro, despite intense pressure from the US and the non-electoral opposition to boycott the election. Falcón had been the campaign manager for Capriles, the 2013 opposition candidate.

Falcón’s main program was to replace the Venezuelan currency with the US dollar, which would address inflation but would also prevent the government from using fiscal means to manage the national economy. He also advocated taking massive loans from the IMF and other institutions of international capital. The chavistas characterized his program as selling out Venezuela to foreigners.

Falcón had signed a pledge to recognize whomever won the election, which he promptly reneged within minutes of his loss, predictably claiming “irregularities.”

Only 46% of the eligible voters cast ballots on May 20. This turnout is comparable to many US elections and the election of French President Macron in 2017, but low by Venezuelan standards. Nevertheless, Maduro received a larger percentage of the eligible vote in Venezuela than did Obama in 2012 or Trump in 2016 in US presidential elections.

Besides the opposition boycott, people sympathetic to the Bolivarian Revolution, such as a Caracas taxi driver we spoke with, were not motivated to vote in an election that they saw as not tightly contested.

Not only did Maduro sweep the contest with 68% of the vote, but he emerged as his own person from under the shadow of Hugo Chávez. Maduro had forged deep personal ties with his supporters. We could feel that connection among a red sea of supporters triumphantly chanting “vamos Nico” (“go Nico,” with Nico being the nickname for Nicolás) when Maduro went to the CNE for the official notification visit.