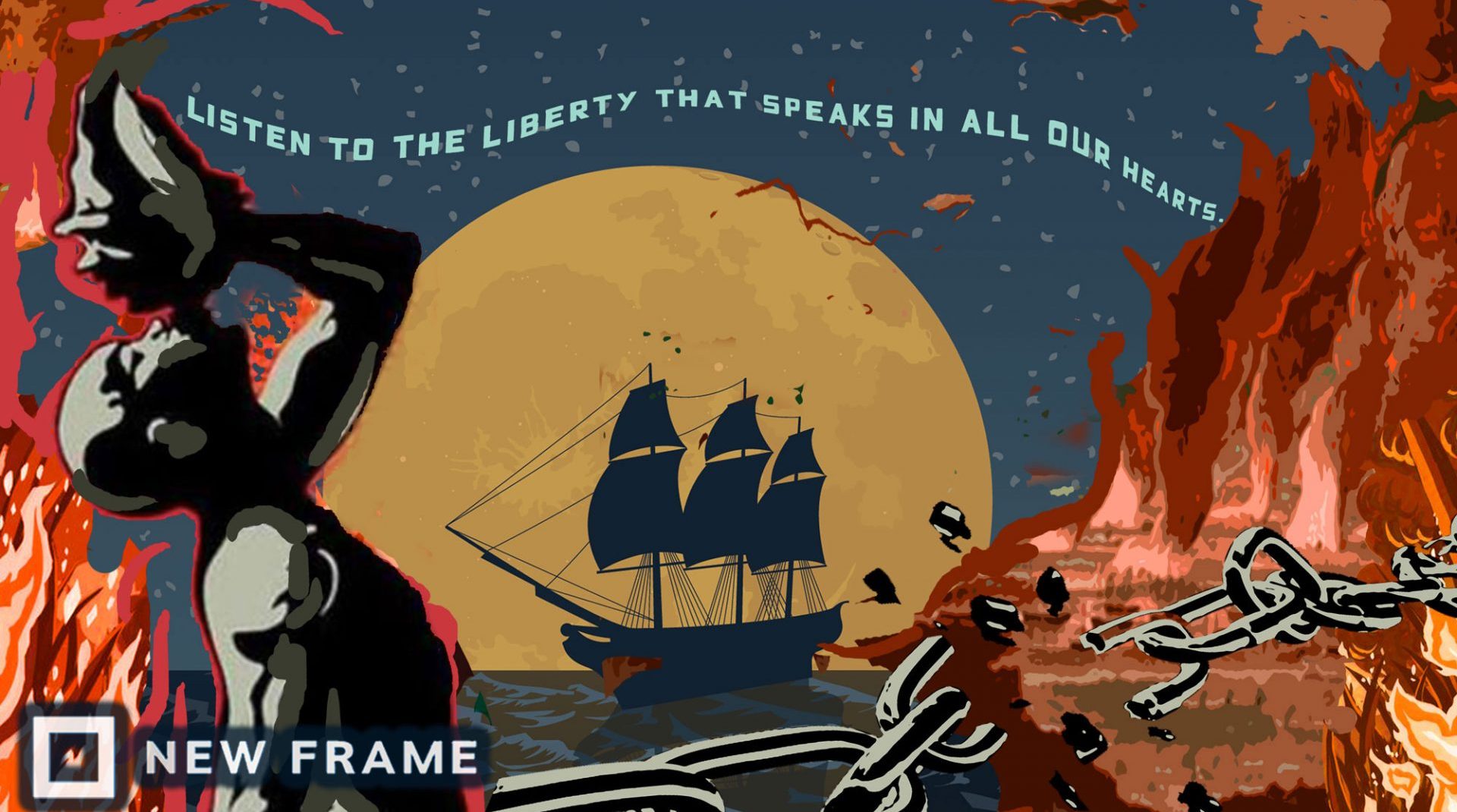 Above image: By Anastasya Eliseeva.

In 1804, enslaved Africans seized their freedom on the Caribbean island that became Haiti.

It came at an unthinkable cost, but it remains an inspiring example of what popular commitment and organisation can achieve.

The celebration of New Year’s Day as a moment to contemplate renewal, usually personal renewal, follows the calendar adopted by Julius Caesar in 46BC. Designed by Greek mathematicians and astrologers, its sole purpose was to attain greater mathematical accuracy in the alignment of dates to the solar year.

In recent years, Antonio Gramsci’s column that was published on 1 January 1916 in the Turin issue of Avanti! has been circulated in progressive circles on New Year’s Day. In the column, Gramsci rejected the idea that New Year’s Day should be an annual day of renewal and insisted that “I want every morning to be a New Year’s for me. Every day I want to reckon with myself, and every day I want to renew myself.”

Christopher Columbus first saw and then set foot on the Caribbean on 12 October 1492, inaugurating a regime of modern terror that, by the late 17th century, had become racialised in a manner that remains all too familiar to us today. That date opened a sequence of world history that has not yet been concluded. But it is New Year’s Day 1804 that marks the beginning of a long, brutally resisted and not yet concluded counter-sequence of direct and effective confrontation, on a world historical scale, with the domination of the planet by Europe and its settler colonies.

On this day in 1804, the French colony Saint-Domingue on the island of Hispaniola became Haiti, the first independent Black republic in the modern world. This was not a concession granted by enlightened European elites. Enslaved African people had seized their freedom, at huge cost, by defeating the three major European powers of the time on the battlefield.

On the night of 14 August 1791, Africans enslaved on Saint-Domingue held a ceremony at Bois Caïman, the Alligator Forest, near Le Cap, a city known as the “Paris of the Antilles”. The ceremony was led by Dutty Boukman and Cécile Fatiman. Boukman had been captured and enslaved in Senegambia. It has often been suggested that his name – “bookman” – may imply that he was a Muslim, a man of the book. Fatiman had been born into slavery to an African mother on the island.

During the ceremony, people took turns to express their pain, an animal was sacrificed and an oath to rebel was taken. A transcription of the speech Boukman gave that night includes the famous injunction to “throw away the image of the God of the whites who thirsts for our tears. Listen to the liberty that speaks in all our hearts.” Within a week, 10 000 enslaved people, women and men, had joined the rebellion, 1 800 plantations had been destroyed and 1 000 slaveholders killed.

On 7 November that year, Boukman was captured by the French, decapitated and his head displayed on a spike in a town square. Fatiman would go on to marry Jean-Louis Michel Pierrot, a general in the army of formerly enslaved people that emerged from the rebellion, and live into old age.

The war for freedom raged for more than 12 years. Saint-Domingue was the wealthiest of the European colonies, a place where incredible riches for some were built on others being worked to death. Each year, around 40 000 new slaves were brought to the island to sustain the plantations that produced fabulous wealth in France. The rebellion, and then the war, were met with extraordinary brutality as the plantation owners and their backers in Europe sought to retain control of the island, the plantations and the enslaved people whose labour was the material foundation for the new wealth – and the shift that was under way towards liberalism – in Europe.

Toussaint de Breda, born into slavery on the island, took the name Loverture, the opening, and became the leading general in the revolutionary army. In 1802, after more than a decade of war, Napoleon, the most powerful man in the world, raged against “Toussaint … this gilded African … these black leaders, these ungrateful and rebellious Africans”. He declared that he would not rest until he had “torn the epaulettes off” every rebel in every colony.

After Napoleon’s army arrived in Saint-Domingue, a large part of the rebel army defected to the French. Loverture was betrayed by Jean-Jacques Dessalines, one of his generals. He walked into a trap, was captured and taken to France, where he soon died in a prison in the Jura Mountains. Dessalines saw the rebel army through to its final victory.

As philosopher Peter Hallward wrote in a short but brilliant essay on the bicentenary of the revolution: “Of the three great revolutions that began in the ﬁnal decades of the eighteenth century – American, French and Haitian – only the third forced the unconditional application of the principle that inspired each one: afﬁrmation of the natural, inalienable rights of all human beings. Only in Haiti was the declaration of human freedom universally consistent. Only in Haiti was this declaration sustained at all costs, in direct opposition to the social order and economic logic of the day. Only in Haiti were the consequences of this declaration – the end of slavery, of colonialism, of racial inequality – upheld in terms that directly embraced the world as a whole.”

While Loverture was dying in prison, English poet William Wordsworth wrote in honour of the general: “There’s not a breathing of the common wind/ That will forget thee.” But Wordsworth was an outlier among European intellectuals. As Haitian historian Michel-Rolph Trouillot noted in 1995, the intellects of the leading European thinkers had been so deeply deformed by racist hallucinations that, even after the defeat of the European powers by Louverture’s forces, they were not able to grasp the political agency of Africans in Saint-Domingue. This, Trouillot noted, has continued to be a feature of much of the European academy, including its radical edge, into the present.

But though the Haitian revolution was incomprehensible in the salons of Paris, news of its triumph spread across the Black world, largely through Black sailors and interactions in port cities. It inspired the 1808 slave revolt in Cape Town whose leader, Louis van Mauritius, a tailor, took great care to craft an outfit modelled on that worn by Louverture.

The Haitian Revolution had imperfect leaders, and profound political differences opened up between the leaders thrust up by the revolution and its ordinary – and now mostly anonymous – protagonists. Some of the revolution’s leaders wanted to take control of the plantations for themselves, while the rebels who had pushed the revolution from below to its triumphant conclusion wanted to destroy the plantations and restore the small-scale systems of communal farming they had known in Africa.

The hope in Haitian freedom

After its victory, the revolution was rapidly encircled by the European powers. The French, with 12 warships anchored off the island, forced Haiti to pay “compensation” for the loss of the colony and its slaves in 1825. The debt was finally paid off in 1947. The United States invaded Haiti in 1915, and since then it has denied its citizens their right to political autonomy, whether through military occupation, backing massively corrupt and authoritarian dictators, or organising coups such as the one that removed Jean-Bertrand Aristide, a hugely popular president, from office in 2004, shortly after the celebration of the bicentenary of the revolution.

The fate of the revolution shows just how far we have to go. But the fact of the revolution indicates what is possible. In a moment when political pessimism is taken as profound insight, and few intellectuals are able to articulate their thought to popular struggles and develop clear and compelling visions of an emancipatory horizon, the revolution is a lodestar.

Hallward makes a vital point about its contemporary significance: “The achievement of Haitian independence reminds us that politics need not always proceed as ‘the art of the possible’. Haitian independence brought to an end one of the most profoundly improbable sequences in all of world history. Contemporary observers were uniformly astounded. As Robin Blackburn observes, Toussaint’s forces broke the chain of colonial slavery at ‘what had been, in 1789, its strongest link’. They overcame the most crushing form of ideological prejudice ever faced by a resistance movement and defeated in turn the armies of the most powerful imperialist nations on Earth.”

The oppressed have always had, and will always have, the capacity to liberate themselves. We can and must think beyond the sad farce, imposed by the imperial donor complex, that has largely replaced the commitments to popular praxis and visions of emancipation that were widespread in the 1970s and the 1980s with the idea that a contained and largely ineffectual “social justice sector”, a set of professional organisations with no popular base or mandate, is the route to real social hope.

New Year’s Day is the anniversary of the Haitian Revolution. That’s a fact, a solid material fact, worth holding on to.