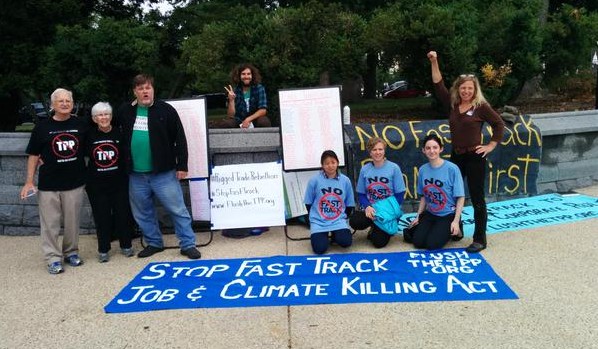 We are in the final battle of the year to stop Congress from handing power over to the White House to fundamentally alter global governance in a way that further empowers multinational corporations and strips us of our democratic rights.

Washington, DC – The movement to stop Fast Track, the Trans-Pacific Partnership (TPP) and other rigged trade agreements is huge and very diverse. It has delayed previous attempts over the past few years by Congress to pass Fast Track legislation that would allow the President to sign international agreements like the TPP, Trans-Atlantic Trade and Investment Partnership (TTIP) and the Trade in Services Agreement (TISA) into law before they go to Congress for restricted review, no amendments and only an up-or-down vote.

This year, the President and Republican leadership are doing all that they can to get Fast Track. They want to complete the TPP but final negotiations have stalled until Congress passes Fast Track. The President had hoped to have Fast Track by the end of April when the lead negotiators and the Prime Minister of Japan came to Washington, but it hadn’t even passed out of the Senate by then despite the conventional wisdom that the Senate was a ‘sure thing.’

It was the work of thousands of people across the country who pressured their Senators and made the Majority Leader Mitch McConnell and the Obama administration have to twist arms to get the necessary votes. Now that Fast Track has left the Senate, all attention is on the House where the leadership has discussed having a vote as early as next week (recent reports indicate that may be delayed because they do not have the votes).

Up until this time, the White House and leadership knew that they didn’t have the votes to pass Fast Track. The vast majority of House Democrats have defied their President by taking a stance against Fast Track, and a significant number of Republicans are also opposed. But we’ve been here before with previous votes on Fast Track. As we enter the final days, we expect Fast Track supporters to stop at nothing to wrangle votes from members of the House and we know that the significant number of members who have not declared their position publicly are hoping to get a nice deal in exchange for their vote. We know that proponents will peel off opponents until they have just enough votes to pass Fast Track.

We can’t let that happen. We can’t allow Fast Track, which will last for up to seven years, to pass through Congress. If it does, we can expect the TPP, TTIP and TISA to be signed into law and together they will further empower multinational corporations, drive a race to the bottom in jobs and worker and environmental protection and destroy our ability to pass laws that protect our communities and support local economies. The costs of medication and health care will rise. Food safety will suffer. And even our rights on the Internet will be under attack. It will become impossible to transition to the clean energy economy we need to confront the climate crisis.

At this point, with tremendous resources being spent not just by the administration and leadership but also by entities such as the Chamber of Commerce, nothing short of a popular rebellion will stop Fast Track and the path to global corporate rule.

That’s why today we launched the Rigged Trade Rebellion. We will have a sustained presence on Capitol Hill, between the House office buildings and the Capitol Building, from now until we are certain that Fast Track will not pass.

We will be back when Congress returns on Tuesday and we’ll be there as often as is necessary until we are certain that Fast Track won’t pass and our future will be protected. Will you join us in taking action?

Being there gave us the opportunity to talk to members of Congress and their staff, to talk to union leaders who just met with Nancy Pelosi, Food & Water Watch activists, with Tea Party and traditional Republicans who were also lobbying to stop Fast Track and to discover that Paul Ryan (R-WI) is lying (surprise!) when he says he is closing in on the votes he needs. It is a great opportunity to be a visual presence opposing Fast Track and to have important conversations with key decision makers.

If you can come to DC, then join us.

If you can’t come to DC, then organize your own Rigged Trade Rebellion locally and let us know.

If you can’t do that, then call members of Congress to tell them to oppose Fast Track. Use the tool at www.StopFastTrack.com.

And, whatever you do, promote the Rigged Trade Rebellion, the hashtag is #RiggedTradeRebellion.

And if you can’t do that, perhaps you can make a donation to support our work. Click here to donate.

This is a critical time. We’ve come so far. Join the Rigged Trade Rebellion today to protect our future. We can  win this together!