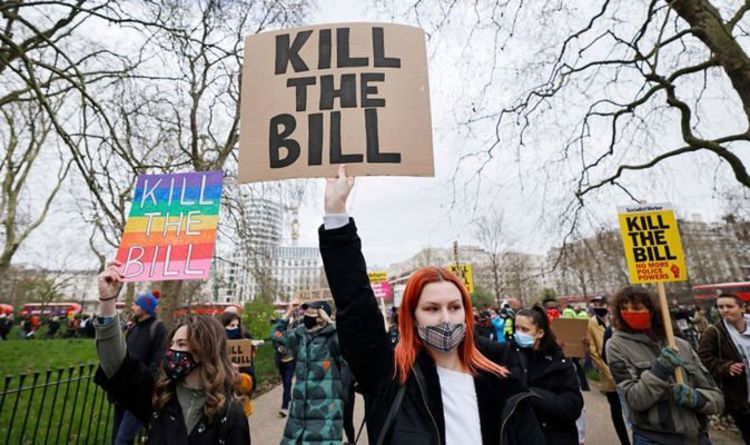 The Right To Protest Wasn’t Given – It Was Won

This weekend’s protests against the Police Crackdown Bill were in defence of democratic rights which were hard won.

And which will be eroded unless we are prepared to fight for them.

United Kingdom – Over the last few weeks, the brutal policing of protests in Bristol has been profoundly disturbing. The right to peaceful assembly and protest are fundamental principles of any democracy, and the rich history of dissent in this country show us that they literally can change the course of history. Nobody knows this better than the people of Bristol, a city whose radicalism has seen it on the frontlines of change.

The Bristol Bus Boycott of 1963 drew national attention to racism in public life, playing a key role in securing the enactment of subsequent race relations legislation that outlawed racial discrimination in public places, housing and employment. This radicalism has been with us in recent years, with last summer’s wave of Black Lives Matter protests seeing the removal of Bristol’s statue honouring the slave owner Edward Colston.

Bristol shares this radicalism with my constituency of Poplar and Limehouse in East London. In the last century, my constituency saw militant Suffragette protests, the Poplar Rates Strike, and the Battle of Cable Street – hard-fought struggles that shaped their times and played a significant role in the ongoing struggle for justice, freedom and equality.

These fights, seen now as milestones of progress in our society, have only been made civil in retrospect. The sanitisation of the Suffragette movement is one profound example of this: its historical record as a movement which challenged ‘law and order’ and faced considerable state repression is a reality ignored in official narratives today.

The same is true of the stance Poplar Council took against exorbitant rates one hundred years ago. Faced with a large increase that would hit the poor and unemployed the hardest, thirty councillors – including the pregnant Nellie Cressall – refused to comply with the government and were jailed as a result.

The protest defied the government, the courts, and helped build widespread support for Labour in East London as a party that defended working class communities. Their action had ripples in Labour’s future: George Lansbury, a key organiser of the rebellion and daughter-in-law of Minnie Lansbury, who died due to her imprisonment, would later lead Labour.

In the case of the Battle of Cable Street, the police were sent to protect Sir Oswald Moseley’s fascists and facilitate their terrorising of East London’s Jewish community. Yet when local workers resisted the fascists and their police protectors, it was they who were the instigators of violence and bloodshed in the eyes of the establishment media.

More globally, it is often overlooked that Martin Luther King – one of the most widely recognised campaigners in public imagination – was arrested around 30 times and spied on by the FBI, whose agents wrote him an anonymous letter in 1964 urging him to kill himself. And of course, former Tory prime minister Margaret Thatcher dubbed Nelson Mandela and the African National Congress of being terrorists in the 1980s, with sections of the Tory Party campaigning for Mandela to be hung.

Furthermore, as movements against injustice gain power, the most disruptive aspects receive disproportionate attention. Critics often portray them as representative of the whole, and it is often the case that the work of agents provocateurs set the agenda.

Indeed, the tactic of using undercover police posing as protesters to commit crimes and provoke violence – including justifying a violent response from authorities – is now being formally decriminalised by the Spy Cops Bill, which gives undercover operatives the power to commit crimes as part of the infiltration of groups that fall under a wide range of categories – from trade unions to organised religions.

It is for these reasons – both historical and very current – that I and so many others have been forthright and absolute in our opposition to the Policing Bill, which gives our government the green light to shut down any protest it deems disruptive, as well as essentially banning all protests outside of parliament itself.

We can be under no illusion – this is yet another authoritarian clampdown on the civil liberties we hold dear. Through banning protest, the government is drawing another line in the sand between those who benefit from the political establishment, and those who wish to challenge it.

It would be wrong to underestimate the cruelty of the current order. This is a political elite that has overseen the astronomical rise in food bank usage in Britain during the last decade of austerity. It has overseen the hostile environment and the tearing apart of families, the skyrocketing of homelessness, and the unnecessary deaths of thousands in our pandemic death toll.

Even as things become increasingly volatile in British society, the Tories will do all they can to cling onto power. Their enthusiasm for heavy-handed policing has been notable over the past year, and the ongoing disruption in Bristol may not be a one-off unless we have a serious rethink about our police force, the powers they have, and who they affect.

Stop and search is used disproportionately on those from Black, Asian and Minority Ethnic backgrounds. Prevent is seen by many to proliferate Islamophobia. Just recently, a Metropolitan Police officer has been charged with the abduction and murder of Sarah Everard, while another has been found guilty of membership of a neo-Nazi terror cell. When people like these are attracted to the police, it’s no wonder that many do not feel the police are there to protect them.

But more fundamentally, this is why the right to protest must be protected, or else we find ourselves on an extremely worrying path, with a totalitarian government able to silence whoever they choose. Those protesting for democracy across Britain this weekend were right to do so – and should have such rights enshrined in law.

I am with those protesters, who have my solidarity – because I know what side of history I want to be on.

Apsana Begum is the Labour member of parliament (MP) for Poplar and Limehouse.