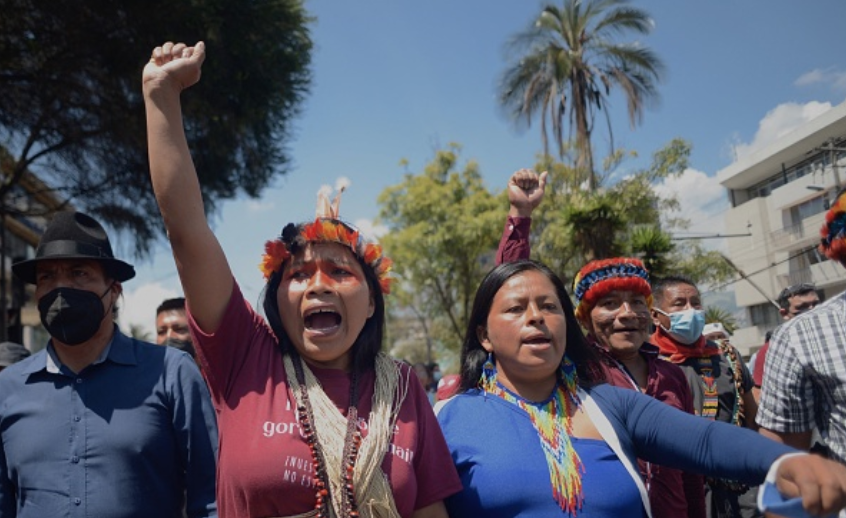 The Rights Of Nature Movement Cannot Be Stopped

From the Navajo Nation to a small town in Pennsylvania to Ecuador, then across the world, the idea of enshrining the rights of nature is only growing.

The Ecuadorian constitution, since 2008, has stated: ”Nature or Pachamama, where life is reproduced and exists, has the right to exist, persist, maintain and regenerate its vital cycles, structure, functions and its processes in evolution.” This bold statement galvanized the rights to nature movement across the globe. Its growing reach, along with a precedent-setting court decision earlier this winter, illustrate the power of invoking legalized rights in protecting endangered ecosystems.

The importance of rights of nature is deeply rooted in Indigenous understandings of the interconnectedness of all life. In this century, the legal movement for protection has looped from the Navajo Nation through a small town in Pennsylvania, to Ecuador then across the world, returning to native communities of North America, and back to Ecuador.

On Dec. 21, 2021, Ecuador’s Constitutional Court ruled that mining activities pursued by a state mining company and its Canadian partner threatened the Los Cedros protected area’s right to exist and flourish. The mining operation could not legally proceed because it violated the rights of nature. The global implications of this ruling are only now beginning to be unpacked.

Ecuador has a long and deeply conflicted relationship with mining. International mining companies have been working since the 1990s, often with state support, to get access to the country’s mineral resources. And local communities have been resisting — lobbying local government officials, organizing marches and sit-ins, escalating to confronting mining officials, blocking roads and going to jail.

One fierce resister remembers taking care of the younger children as a 12-year-old in 2006, while the grown-ups went off to confront the mining companies. She ended up seeing her father come home beaten up and her brother arrested. Now she fights on the frontlines on behalf of her own children.

“At a young age, we learned the value of our parents’ struggle, to teach ourselves the constitutional laws that guarantee our rights, to investigate how we can confront these companies,” Guachagmira told re:Wild. “We learned to think about the future, and not just for ourselves … The companies have their weapons, and we have our dignity. We fight with the constitution, the truth and with our conviction. We are not fighting only for ourselves, but for all life on the planet.”

Hopes ran high in Ecuador in 2008 when that clause on rights of nature was included in their new constitution — the first of any country in the world. But then they faded, as that fine-sounding language rang increasingly hollow without follow-up enforcement. Instead, mining agreements between the government and private mining interests proliferated.

Grassroots Indigenous opposition continued with unabated intensity in the face of overwhelming odds. Then came December’s ruling. Now, not only do Ecuadoreans have aspirational rights language in their constitution, but they also have clear legal precedent, from the highest court of the land, for enforcement.

International headlines highlight the story of how the rights of nature movement has spread since 2008. In 2011, there was: “Bolivia enshrines natural world’s rights with equal status for Mother Earth.” In 2017: “New Zealand river granted same legal rights as human beings.” In 2019: “Bangladesh Supreme Court Upholds Rights of Rivers.” In 2021: “Indian Court Rules That Nature Has Legal Status on Par With Humans — and That Humans Are Required to Protect It.”

Comparable Indigenous activity in North America can trace its recent origins to the Navajo Nation Tribal Council’s ban in 2005 on uranium mining, drawing upon previous codification of traditional law. In 2016, the Ho-Chunk Nation of Wisconsin’s General Council voted to add “Rights of Nature” to their tribal constitution. In 2018, the White Earth Band of Ojibwe, part of the Minnesota Chippewa Tribe, recognized that wild rice has inherent rights. In 2020, in a spate of activity, the Menominee Indian Tribe of Wisconsin asserted that the Menominee River has the right to exist naturally, flourish and evolve; the Nez Perce Tribe’s General Council passed a resolution recognizing the Snake River as a living entity with rights; and the Tŝilhqot’in Nation enacted a ʔEsdilagh Sturgeon River Law.

Still, the idea of enshrining the rights of nature into Western law was first pioneered in rural Pennsylvania. That unlikely story starts in 2006 with a school nurse in the old mining town of Tamaqua. While joining the borough council mostly to challenge an “old boys” network, she became increasingly concerned about plans for dumping toxic sewage sludge and coal fly ash in abandoned mines on the edge of town. It was shocking to discover how little power her town had to protect its people. How could a faceless out-of-town corporation have the right to come in and endanger a whole community’s air and water supply?

She learned the answer to that question at a Democracy School run by the Community Environmental Legal Defense Fund, or CELDF, where the curriculum begins in 1773. Towns all over the colonies were fed up with England writing all the laws to benefit the king and protect the profits of the East India Company. They wanted the right to make their own laws, for the benefit of their own communities. Dozens of them wrote up resolutions that were the inspiration for the Declaration of Independence, a bold (and wholly illegal) challenge to the laws of empire.

It turned out, however, that moneyed interests in the colonies were not ready to abandon a system based on the rule of property — or to embrace popular democracy — and the 1787 Constitution brought back many elements of the British system. The rights of property over people were reintroduced and became increasingly entrenched in law over the decades — until by the 1880s corporations had gained the status of personhood, and keeping them from their profits became a violation of their rights. Over the same period, more and more local laws were pre-empted by state and federal bodies, and structures of community self-government were steadily eroded away.

Many communities now facing outside corporate harm turn to regulatory agencies for protection. Yet those agencies’ function is to manage harms, not to oppose them, and public input at hearings has no legal status. So, what’s a school nurse faced with big corporations that are threatening her community going to do? Propose a Community Bill of Rights, saying that we have a right to act to protect our community from external harm. That our human rights are inalienable and take precedence over property rights. And while we’re at it, let’s assert that nature has rights too.

But is this legal? It’s certainly as legal as the Declaration of Independence. In any case, the Community Bill of Rights passed a borough council vote (narrowly), the toxic sludge and fly ash corporations were told to stay away, and the world had its first example of legislation declaring that nature has rights.

Though the rights of nature movement has increasingly taken hold, it faces many obstacles. Fine-sounding laws on the books are only as good as their enforcement. It can be hard to set the boundaries of local jurisdiction over natural entities like rivers. The lack of legal precedent makes courts reluctant to act. And by threatening our nation’s foundational attachment to private property rights, these campaigns are hard to win.

Consider manoomin, the wild rice sacred to the Ojibwe people. After the heartbreaking failure of the movement to stop the Enbridge Line 3 pipeline, a native lawyer who had been preparing for the possibility that the protests would not be enough, filed a lawsuit: Manoomin vs. the State of Minnesota. It asserts that wild rice has “inherent rights to exist, flourish, regenerate and evolve” and that permitting the construction of the pipeline violated those rights. In the maze of a state court system, they lost, then won, then lost again. Then they filed in the tribal court. Citing lack of legal precedent, that court ruled against them as well — a hard loss. Yet they continue to hold out hope as they await the results of an appeal.

This issue of legal precedent is what has right of nature experts so excited about the court ruling in Ecuador. According to Ben Price of the Community Environmental Defense Fund, the court’s decision may only apply in this one case, but it still creates a template and model for future decisions, beyond just in Ecuador. “The precautionary principle switches the burden of proof from the victims,” he said. “It’s not going to be the expert opinion or scientific studies we will depend on, but the community itself. The people living within an ecosystem are the experts with the greatest knowledge of that ecosystem. This is a significant paradigm shift, a cultural shift.”

Price sees court each battle, as an opportunity to deepen the level of understanding in the public mind. “Tamaqua, a small town with hardly any possibility of having an effect on any place in the world is now part of a worldwide movement that doesn’t belong to anybody,” he said. “It belongs to the natural world we’re part of and trying to protect. We will meet the intransigence of the system. It’s deep-rooted, but not as deep-rooted as the Indigenous respect for the natural world. We are part of a historic movement for emancipating the planet, emancipating nature from legal ownership. This is a historical moment.”