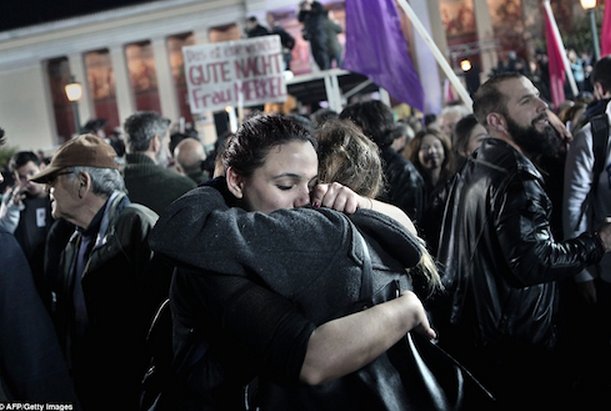 The Greek Left, A Call For Pan-European Change

The Greeks have voted for SYRIZA in order to be able to breathe, but deeper aspirations for freedom, social justice and radical democracy are very high.

This is the first time since the Spanish revolution of 1936 that a left party wins general elections in Europe. In this weekend’s national elections in Greece the leftist SYRIZA took 149 out of 300 seats and will now form a coalition government with a small right-wing anti-austerity party to run the country.

After seven years of neoliberal overkill the Greek people overthrew the two-party regime that has been governing the country for the past 40 years with socially catastrophic results. The populist-right New Democracy (ND) party took 27,8% and the ex-socialist (now turned neoliberal) PASOK received a petty 4,6% of the votes. SYRIZA has increased its electoral base by 10% since the 2012 elections, by amassing the votes of the underclasses and the violently proletarianized lower middle class.

Change of course for a whole society

SYRIZA is the outcome of a 15 year collaboration between divergent political groups within the fragmented Greek left, which started at the times of the alter-globalization movement. It climbed from 4% to 27% in the 2012 elections, when it managed to represent the social dynamics of the massive social movements, which at that time shook the country and overthrew the previous PASOK government. As movements failed to provide tangible alternatives and the next ND-PASOK coalition government pushed harder on the neoliberal restructuring and its extreme right political agenda, the oppressed strata of Greek society again bestowed their hopes in representative politics.

In this context, SYRIZA has won yesterday’s elections by forging a social alliance on two specific proposals: (1) a social salvation plan to ameliorate the consequences of the neoliberal onslaught on the lower classes, and (2) a plan to re-negotiate the Greek public debt with the EU and the IMF, in order to make it sustainable. Although this moderate political program does not sound leftist, it constitutes a radical change of course from the neoliberal orthodoxy, which has been cemented in both the EU and global institutions, and gives hope not only for Greece but also for wider power shifts in the European Union.

Popular power on the surge

Strange as it seems, the rise of SYRIZA is the result of two years of decline in the Greek social movements. Yet these elections may signal the ignition of a new and stronger round of social struggles in Greece and beyond. The power of representation to passivize voters and stabilize the political system has lost ground. The poor have voted for SYRIZA in order to be able to breathe, but deeper aspirations for freedom, social justice and radical democracy are very high.

The youth, the precariat and the jobless form large and dynamic social groups that will not stay content with moderate social democratic politics. After too many years of suppression and amassing of movements’ power, militants from the grassroots are now mature enough to gain every inch of ground from the state and the Greek oligarchy and fight back from better positions. Social antagonism in Greece is bound to intensify for the right reasons.

The timing for a rise of popular power from below in Greece is better than ever, but its call now echoes throughout most of Europe. Apart from Podemos, Spain is a melting pot of grassroots alternatives and movements’ experiments with representative politics. Politicization at the social base also gives rise to strong leftist or left-populist parties in Ireland, Scotland and in Eastern Europe. Social mobilization in Italy and France rejuvenates. The European movements are more networked than ever before.

In addition, the peoples of the European periphery face similar social conditions due to years of neoliberal austerity and plunder. The victory of the Greek left echoes to them as a hope for radical changes in their own countries. If the European neoliberal elite attempts to crush Greece under hardline austerity, war will be brought home. An alternative Europe beyond the existing neoliberal structures of the European Union is indeed possible. Its future is vested in our hands. Now is the time to build our counter-attack.