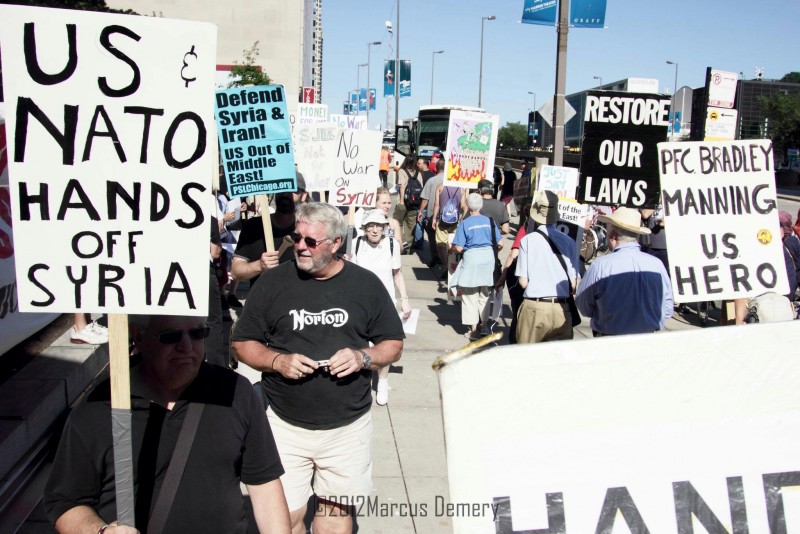 The Rush To An Illegal War: Obama Should Seek Congressional Approval

Above: Protest from July 2013 in Oklahoma where people from across the political spectrum came together to oppose war in Syria.

Three articles on the need for the President to seek congressional approval before military action in Syria: – Both President Obama and Vice President Biden have said that going to war without congressional approval when it is not an act of self defense is illegal — of course, they were not the president and vice president when they said it. – Members of Congress are calling on the president to announce a special session to consider military attack on Syria. – Even people with a broad view of the power of the president to begin military action see the attack on Syria as a stretch of the law. The repercussions of military action in Syria are hard to predict.  There will be unintended consequences.  President Obama is moving toward a war where only 9 percent of Americans support the attack.  There are threats of retaliation being made against US allies Saudi Arabia, and Israel.  Iran could be pulled into a war defending Syria.  President Obama could be starting something much bigger than a two-day bombardment of Syria (which is bad enough, and something we oppose); and he will be doing so illegally under domestic law without Congressional approval and under international law without UN authorization. [The UK has decided to go to the UN Security Council for a resolution on Syria.] Is Obama afraid that if there is debate it will be evident a military attack on Syria is a mistake?