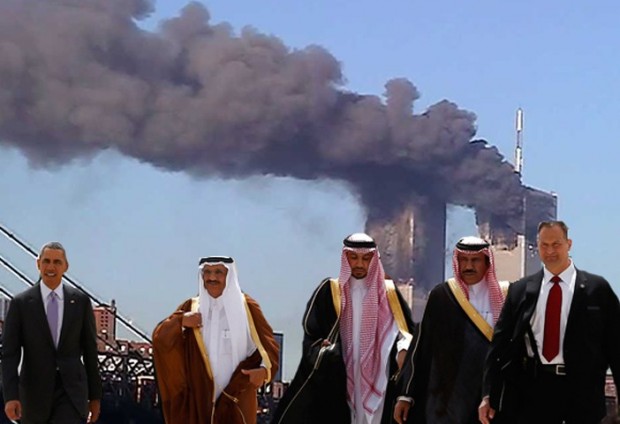 The Saudis And 9/11 – A Larger Truth Emerges

“These are the times that try men’s souls. The summer soldier and the sunshine patriot will, in this crisis, shrink from the service of their country … Tyranny, like hell, is not easily conquered.”  Thomas Paine

On September 28, an almost unanimous Congress overrode for the first time an Obama veto. Coming 15 years after 9-11, this unique action by Congress exposes the government of Saudi Arabia to liability in U.S. courts for facilitating the attacks of 9-11. We are still wrestling with 9-11. Why?

9-11 initiated the Global War on Terror (GWOT) – our current state of being in perpetual war. The GWOT has metastasized to the point of facing off with Russia in Syria where we are on the side of the “terrorists” determined to oust Assad, the latest of our “regime change” projects. All of it is in the name of “national security.”

Two months ago, the Obama administration finally had to release the “28 Pages” under intense pressure, including from courageous members of Congress and ultimately mainstream media. The 28 Pages are all about Saudi government complicity in 9-11. As summarized by the chairman of the Senate Intelligence Committee that back in 2002 composed the 28 pages, namely former Senator Bob Graham, the Saudi government was a “co-conspirator” in 9-11.

Part of Graham’s motivation for spearheading the exposure of Saudi complicity in 9-11 is that the Saudis remain the “primary financiers of terrorists and the primary recruiters of terrorists.” Another Graham quote: “ISIS is a product of Saudi ideals, Saudi money and Saudi organizational support.”

So why the 14 years of covering up the 28 Pages, first by Bush, then by Obama? Why has the executive branch of our government (until now successfully) argued in court that Saudi Arabia should be immune from liability in the suit brought against it by the families of 9-11 victims? How is it that in April shortly after CBS’s 60 Minutes broadcast demands for release of the 28 Pages, Obama was in Riyadh genuflecting before the Saudi King who had snubbed him at the airport? How could the Senate a mere week before its 97-1 vote overriding the veto, vote 71-27 in favor of continuing to arm Saudi Arabia as it continues to pummel Yemen? Why did the President veto the law [Justice Against Sponsors of Terrorism Act (“JASTA”)] that exposes Saudi Arabia to liability?

The Saudi-American military-intelligence alliance has been very close for decades. We designed Saudi military-intelligence, we train them and we equip them with weaponry. Saudi Arabia is our military industry’s biggest foreign customer by far. “When President Obama secretly authorized the Central Intelligence Agency to begin arming Syria’s rebels in 2013, the spy agency knew it would have a willing partner to help pay for the covert operation. It was the same partner the CIA has relied on for decades for money and discretion in far-off conflicts: the Kingdom of Saudi Arabia.” (NY Times, Jan. 23, 2016).

The Saudi government would not, could not and did not participate in 9-11, nor does it now support terrorism (in Syria for example) without direction from and coordination with the top echelons of our own government.

The 28 Pages substantiate that the key figure in the Saudi government involved in financing and facilitating 9-11 was Prince Bandar bin Sultan, then longstanding Ambassador to the U.S. Bandar is also known as “Bandar Bush,” thus nicknamed by George W. Bush because of his longstanding and very close relationship with the Bush family. (When in the 1980s then V.P. George H.W. Bush wanted a way to finance the terrorist Contras in Nicaragua during the then covert, totally illegal, treasonous “Iran-Contra” operation, he relied upon Bandar who by his own admission served as the bagman.) Bandar has relationships with figures throughout our corrupt power structure.

The Wall Street Journal reports that since being appointed Director of the CIA by  Obama in Jan. 2013, “Mr. Brennan has been in periodic contact by phone with Prince Bandar.” It does well to recognize that from 1996 to 1999, John Brennan was CIA Chief of Station in Saudi Arabia, just before he was promoted to Chief of Staff to CIA Director George Tenet, in which capacity he coordinated and covered up the CIA’s torture program.

Brennan did all he could do to prevent the release of the 28 pages, for example, appearing in May on NBC’s Meet the Press, to say that “the 9/11 Commission took those 28 pages and followed through on the investigation and they came out with a very clear judgment that there was no evidence that indicated that the Saudi government as an institution, or Saudi officials individually, had provided financial support to al Qaeda.”

Here is a response by Kristen Breitweiser who lost her husband in the 9/11 attacks, in which statement she is joined by four additional 9/11 widows: “First and foremost, here is what you need to know when you listen to any member of our government state that the newly released 28 pages are no smoking gun — THEY ARE LYING … [Bush’s hand-picked 9-11 Commission] Staff Director Philip Zelikow blocked any investigation into the Saudis. Zelikow even went so far as to fire an investigator who had been brought over from the [Congressional investigation] to specifically follow-up on the Saudi leads … I will repeat — the investigator was fired … Finally, it was Zelikow who ‘re-wrote’ the entire Saudi section of the 9/11 Commission’s Final Report — leaving out all the damning, incriminating information.”

On the same day just before the Senate was to vote on Obama’s veto of JASTA, Brennan was at the Brookings Institution futilely protesting that overriding the veto would “have grave implications for the national security of the United States.”

In May, right after the Senate first passed JASTA, a London based Saudi daily published a piece by a leading “Saudi legal expert” that indicates how Saudi Arabia might defend itself in court: “[A]ll the wise people in the world who are experts on American policy and who analyze the images and the videos [of 9/11] agree unanimously that what happened in the [Twin] Towers was a purely American action, planned and carried out within the U.S. Proof of this is the sequence of continuous explosions that dramatically ripped through both buildings …” The intention of the attacks was to create “an obscure enemy – terrorism – which became … the sole motivation for any dirty operation that American politicians and military figures desire to carry out in any country.”

The Saudi angle is only one of many facets of 9-11 that reveals “inside job.” But this is the facet of 9-11 that has finally attracted Congressional action, partly because Saudi Arabia continues to openly support Sunni extremism, ISIS and al Qaeda, and continues to openly conduct murderous tyranny within its borders, and partly because our “republic … will fail and fall if we do not uphold the truth on this issue,” as expressed by the lead sponsor now in Congress, namely Republican Walter Jones of North Carolina.

It is up to the American people to make the most of this breakthrough. No more ignorant dismissals of “conspiracy theory.” The forces inside our own government responsible for 9-11 are in more control now than they were in 2001. Challenging these forces is urgent and requires all of us.