The Saudis And 9/11 — Confirmation Of The Larger Truth

Above Photo: Secretary of State Colin Powell falsely testifies at the United Nations that Iraq has Weapons of Mass Destruction. CIA Director George Tenant is seated behind him. From Wikipedia.

Note Seventeen years after the 9/11 attack questions remain. Doubts about the official commission report persist. There is no action being taken to resolve these disputes. There should be complete transparency about the events of 9/11. Independent researchers should be given access to the hard evidence so questions about what occurred can be resolved.

A UK newspaper points out the divide writing:

On one side is much of the mainstream media, politicians, official history and prominent experts – all telling us the official version of events are true.

On the other side is another group of experts, including more than 3,000 architects and engineers who have formed their own 9/11 truth movement.

The Architects and Engineers for 9/11 truth have evaluated possible causes of World Trade Center Building 7’s collapse, have raised doubts about the events based on technical issues and about the official investigations. And, they have pointed to suspicious events that occurred around the attack.

The two co-chairs of the Commission, Thomas Kean and Lee Hamilton, believe that the government established the Commission in a way that ensured that it would fail. In their book Without Precedent: The Inside Story of the 9/11 Commission described how the commission was set up to fail. Their reasons included: the late establishment of the Commission and the very short deadline imposed on its work, insufficient funds ($3 million), political opposition to the Commission, deception by various key government agencies, including the Department of Defense, NORAD and the FAA; and, the denial of access by various agencies to documents and witnesses. Hamiliton concludes: “So there were all kinds of reasons we thought we were set up to fail.”

These and other factors lead people to continue to question the official story. The events of that day are extremely important as they have led to never-ending war, mass deaths, a refuge crisis and destruction of entire countries, as well as mass US spending on weapons and war. The nation needs to reach a factual understanding on what occurred, doing so requires transparency and an independent investigation. The article below raises issues about the role of Saudi Arabia in the events of that day which have come to light in recent years.

This article was originally published on 2016. KZ

In 2016, Alex Gibney (“We Steal Secrets: The Story of Wikileaks,” “Taxi to the Dark Side,” “Enron: The Smartest Guys in the Room,” “Casino Jack and the United States of Money”) released a documentary based on a 2006 New Yorker magazine article by Lawrence Wright that exposes the CIA’s deliberate concealment from the FBI of the fact that two important members of al Qaeda were in the U.S. over a period of 18 months leading up to 9-11. According to the official account of 9-11, these two members of al Qaeda ended up on Flight #77 that flew into the Pentagon. The New Yorker reports that the CIA did nothing to stop these two hijackers.

So as to avoid the obvious, the New Yorker article speculates that this was all about rivalry (personal and institutional) between the CIA and the FBI, and also that the CIA kept the presence of the two hijackers secret so as to pursue turning them into our spies.

The FBI has exclusive jurisdiction over terrorism within the U.S. The CIA concealment was not only illegal — it was treasonous. As for turning them into spies, I suppose we are to believe that after the CIA failed to turn them, it just forgot about them.

According to the New Yorker article: “After September 11th, the C.I.A. claimed that it had divulged [Flight #77 hijacker] Mihdhar’s identity to the F.B.I. in a timely manner; indeed, both George Tenet, the agency’s director, and Cofer Black, the head of its counterterrorism division, testified to Congress that this was the case. Later, the 9/11 Commission concluded that the statements of both were false.” The CIA’s Inspector General concluded likewise.

What does this have to do with the Saudis and 9-11?

According to the 28 pages of the 2002 Congressional report on 9-11, suppressed by Bush then Obama for 14 years, and finally released in July after irresistible Congressional pressure, the two hijackers in question were the same two Saudis being supported the entire time they were in the U.S. by agents of Saudi Arabia’s military and intelligence as well as by monthly payments from then-Ambassador Bandar bin Sultan (“Bandar Bush”) and wife.

In State of War: The Secret History of the CIA and the Bush Administration (2006: Simon & Schuster), then National Security correspondent for the New York Times, James Risen, states: “[T]he connections between Osama bin Laden, al Qaeda and the Saudi power elite … are much stronger and far more troubling than has ever been disclosed, and until they are thoroughly investigated … the full story of 9-11 will never be known” (page 179).

But Risen also is focused on the connections between the Bush administration and the Saudi power elite: “Some CIA sources say that George Tenet set the tone for the CIA’s Saudi relationship by relying heavily on developing close relationships with top Saudi officials, including Prince Bandar … CIA officers … say that about once a month, Tenet would slip away from CIA headquarters and travel to Bandar’s nearby estate in McLean, Virginia, for quiet talks … [S]ome CIA officers handling Saudi issues complain that Tenet would not tell them what he had discussed with Bandar, making it difficult for agency officials to know the nature of any deals their boss was arranging with the Saudis” (page 188).

Evidently, one of their “deals” was to protect and support the two hijackers on Flight #77.

Gibney’s 15-minute-long documentary viewable at video.newyorker.com/watch/the-new-yorker-presents-the-agent-gibney includes footage of George W. Bush awarding Tenet the Presidential Medal of Freedom in 2004. Gibney also emphasizes that instead of being held accountable, the CIA underlings were promoted who were directly involved in concealing the presence in the U.S. of the two hijackers. 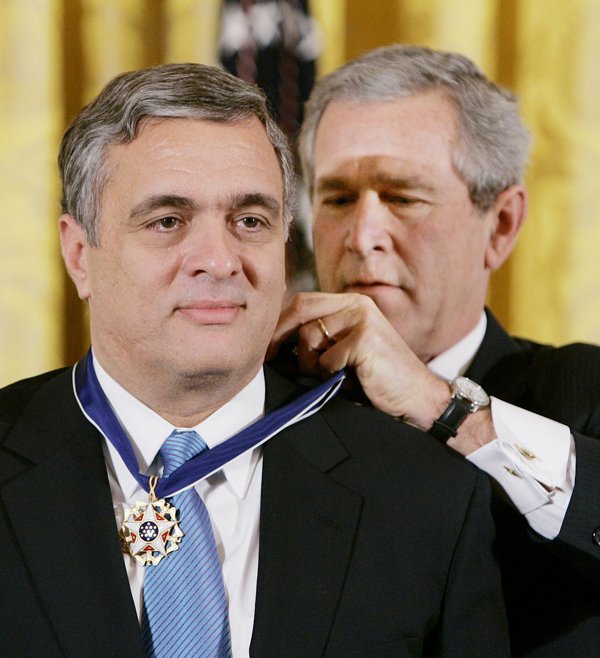 George Tenant and George W. Bush as Tenant is given the Medal of Freedom