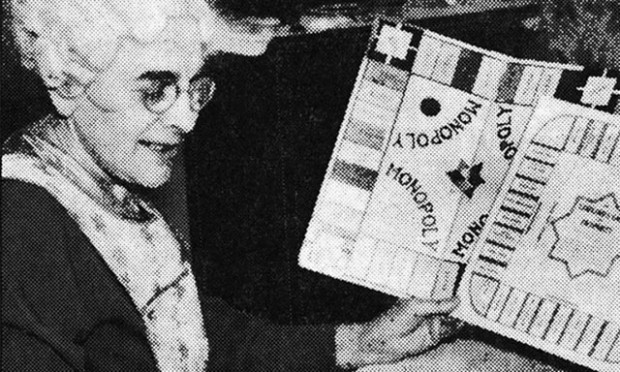 The Secret History Of Leftist Board Games

Above Photo: Elizabeth Magie, inventor of The Landlord’s Game, holds her game next to Monopoly. (Photo: Achetron.com, via Creative Commons)

Think board games are “just games”? Think again. There’s a little known but vibrant history of leftist board games that stand in opposition to the endless number of other games about war, conquest and profiteering. (Which, admittedly, I grew up playing and loving.)

And though some might scoff at the idea, ultimately, we can’t keep politics out of gaming, and in fact, we shouldn’t try. Just like fiction and other works of art, games are a reflection of our beliefs, fears, values, hopes and dreams. Games can help us use our imaginations to challenge the status quo. For over a hundred years, board games have been created to be used in the fight for a better world — one of the most prominent examples being Monopoly.

Wait, what? Monopoly is a leftist game?

The answer to this is both yes and no.

It might be hard to believe, but infamous Monopoly, the game of ripping off your friends and getting angry with your family during the holidays, has its roots in a movement for economic change.

The most well-known story is that Monopoly was created in the 1930s during the Great Depression by a man named Charles Darrow. Not so fast: it turns out that the original Monopoly was actually invented over three decades earlier, by a Quaker woman named Elizabeth Magie. When Magie first came up with the concept, she called it The Landlord’s Game. She stated clearly that its purpose was to give a “practical demonstration of the present system of land-grabbing with all its usual outcomes and consequences.”

Magie’s intent with The Landlord’s Game was to provide a primer on her beliefs about the danger of wealth and property consolidation in private hands. And before its eventual financial success under an alternative identity as Monopoly, The Landlord’s Game was an underground hit. The game was played by activists and families, popularized by word of mouth. Magie further described the goal of the game this way:

[Players] learn that the quickest way to accumulate wealth and gain power is to get all the land they can in the best localities and hold on to it…. Let the children once see clearly the gross injustice of our present land system, and when they grow up, if they are allowed to develop naturally, the evil will soon be remedied.

Some of Magie’s alternative economic values were even instilled in the game itself. The original reason players collected money after passing “Go” was because they had “performed so much labor upon Mother Earth.”

According to a 2015 article in The New York Times:

And yet it was the monopolist version of the game that caught on, with Darrow claiming a version of it as his own and selling it to Parker Brothers. While Darrow made millions and struck an agreement that ensured he would receive royalties, Magie’s income for her creation was reported to be a mere $500.

Even despite this unjust history, Monopoly can still be used to teach about the dangers of economic exploitation. I know of several instances where educators have replaced the game’s rules with some of their own in order to more accurately mirror the real world, like giving some players more money or property to start the game. And the TESA Collective, the organization I’m part of, created Co-opoly: The Game of Cooperatives. We like to say that Monopoly presents the problem, while Co-opoly offers the solution. Players can play them back-to-back and experience two very different economic philosophies.

In the early 1900s, there was another instance of women inventing board games for social change.

Suffragetto was recently brought back to the world’s attention thanks to the only remaining known copy being displayed at the Playing with History exhibit at the University of Oxford. It was first created around 1909 by the British Women’s Social and Political Union (WSPU), a militant women’s suffrage organization known for tactics ranging from hunger strikes to property damage. Suffragetto is like many older board games in that it is just for two players. One player takes on the role of the suffragettes, while the other represents the police.

In the game, the suffragettes have a home base of Albert Hall (which was a popular location for their rallies), while the police start around the House of Commons. The goal is to capture the other team’s base. According to the website Suffrajitsu:

Each side includes five larger markers, representing the Leaders of the suffragettes and the Inspectors of the police, respectively.

Like The Landlord’s Game, Suffragetto had a message it wanted to impart to its players. According to Renee Shelby of Georgia Tech:

Suffragetto is a way to engage with feminist ideology, connect to community history and values, and mimic suffragette inventiveness, strategy, and activism. During play, ideas about bodies, gender, and social relationships become naturalized. Lastly, as the suffragettes engaged in pseudo-anarchist tactics, the game allows players to experiment with alternative identification and forms of resistance.

Suffragetto roughly represents real tactics used by some suffragettes in the UK, and a tactic that has gained popularity recently here in the United States: interrupting a politician’s speech. In this way, it’s clear that the game served both as a means for activists to play with their ideals (literally and figuratively) and spread the word about their movement.

Luckily, you can still play Suffragetto today, even though there’s only one remaining copy, by printing it out yourself.

Are You a Capitalist? A Worker? Roll the Dice to Find Out

In 1978 a professor of politics at New York University — Bertell Ollman — launched a leftist game of his own: Class Struggle.

While The Landlord’s Game enjoyed underground popularity (before becoming the Monopoly we know today), Class Struggle, a game based on Marxist theory, found moderate mainstream success. An article from a 1978 issue of In These Times was recently dug up and sent to me by the magazine’s current executive editor, Jessica Stites. (The article was published without an individual author’s byline at the time.) It made clear how this radical new board game was catching fire:

Since last May … the game has gained an international reputation. The first 5,000 copies have sold out and 25,000 more are being printed…. Major bookstores that never before handled games now display it in windows next to novels and scholarly books. Italian and German firms are negotiating for marketing rights in Europe.

In Class Struggle, at the start of each game, players roll the dice to find out if they are Capitalists or Workers. (This is meant to simulate being born into your status.) Capitalists are given advantages at the start of the game, and they can continuously hinder the Workers throughout by giving them debits. According to the article’s author:

The Workers are rewarded for fighting back. They gain assets by forming trade unions, organizing rent strikes, setting up an independent political party and uniting around issues of race and sex.

The author wondered why a board game about class struggle would take off in such a hyper-capitalist country like America:

One answer is that the game is ingenious, original, and entertaining…. In readable language, the game makes clear the nearly invisible class forces that create everyday life…. The game’s popular presentation of class struggle is rich in humor and optimism as well as hard reality.

And that’s the power of games: they can reach people, even when books, articles, documentaries, lectures, trainings and presentations can’t. People learn best by doing. They become invested and interested in concepts when they are active participants. And games allow people to engage through play and excitement while generating moments that won’t be forgotten.

Today, some of the gameplay, visuals and content of Class Struggle have gone out of date. A reprinting would require a considerable update. But the point is how this game was used in its time to help popularize the concepts of class and alternative economics. Indeed, it’s a game that should be updated and re-released to engage a new generation of people who are still grappling with the great recession and who have been energized by contemporary economic movements like Occupy Wall Street and the Fight for $15.

A Golden Age of Progressive and Leftist Games

With the modern resurgence of board games, and the explosion of people producing indie games, thanks in part to crowdfunding platforms and social media, we’ve entered a golden era of games with missions. In addition to making Co-opoly, TESA recently created Rise Up: The Game of People & Power. In Rise Up, players must work together to build a social movement and overcome an oppressive system. There’s also CIVIO: A Civil Rights Game (from Reach & Teach, a social justice learning company), in which players use cards representing rights, freedoms, bills, constitutional amendments and Supreme Court decisions, combining them to create precedents. Additional examples abound: Freedom: The Underground Railroad (a game based on US history, in which players strategize about how to strengthen the movement to abolish slavery within US law while also taking direct action to free enslaved people from plantations); Keep Cool (a game about global politics and climate change), and so much more. Recently, Bloc-by-Bloc, a game about leftist insurrection against a tyrannical government, was funded on Kickstarter.

And it’s not just board games: There’s even a small, but growing, tradition of socially conscious video games. This War of Mine is a PC game about civilians surviving the horrors of wars, in contrast to so many games about the commanders fighting in them. Papers, Please (a game about migration) puts you in the role of an immigration officer at a border checkpoint in a fictional dystopian nation, forcing players to wrestle with issues of corruption, refugees and exploitation. Spent is a narrative-based game that exposes players to the realities of living paycheck-to-paycheck. Well before those, the classic Sonic the Hedgehog was originally conceived with an environmental message at its core: it was supposed to be a warning about how modern human society was ruining the environment. In an interview publishedat a site called This Is My Joystick, the game’s creator, Yuji Naka, said:

Dr. Robotnik [the game’s villain] is a slightly radical representation of all humanity and the impact humanity is having on nature. In 1991, it was a very sensitive subject to talk about the environment and while I had my viewpoint, I did not speak of it. With Sonic, I was given an opportunity to express my views in a different way and did so, showing Robotnik using pollution and creating machinery which desecrates the environment and it is down to Sonic to change his ways.

Thanks to all the new tools at our disposal, more and more games are being created that allow players to immerse themselves in ideas about fighting for social and economic change. One has to wonder: What would’ve happened with The Landlord’s Game if Elizabeth Magie had been able to crowdfund and tweet it out to the world?