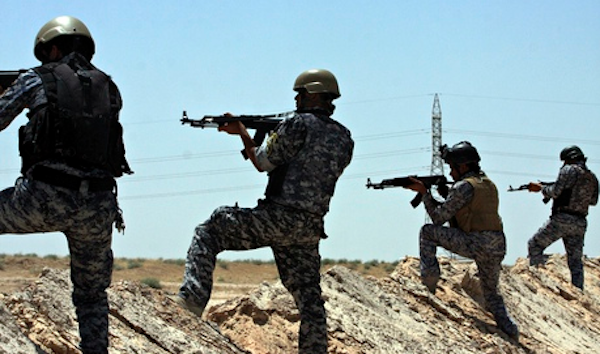 The Sectarian Myth Of Iraq

Iraqi security forces patrol near the border between Karbala province and Anbar province today. ‘Whether Iraq can survive this most serious threat to its existence remains to be seen.’ Photograph: Stringer/Reuters

Tony Blair has been widely derided for his attempted justification of the 2003 Iraq invasion, and his claim last weekend that he’s blameless over the current turmoil. Unfortunately, though, many of his critics have also bought into a central plank of his argument: that Iraqi society is no more than a motley collection of religions and ethnicities which have been waiting for decades, if not centuries, to slaughter each other and plunge the place into a bloodbath.

The main difference between the two sides seems to be that Blair believes western intervention is the answer; some of his critics say Iraq needed a dictator like Saddam to hold the nation together. Neither side, though, has yet produced historical evidence of significant communal fighting between Iraq’s religions, sects, ethnicities or nationalities. Prior to the 2003 US-led occupation, the only incident was the 1941 violent looting of Jewish neighbourhoods – which is still shrouded in mystery as to who planned it. Documents relating to that criminal incident are still kept secret at the Public Records Office by orders of successive British governments. The bombing of synagogues in Baghdad in 1950-51 turned out to be the work of Zionists to frighten Iraq’s Jews – one of the oldest Jewish communities in the world – into emigrating to Israel following their refusal to do so.

Until the 1970s nearly all Iraq’s political organisations were secular, attracting people from all religions and none. The dividing lines were sharply political, mostly based on social class and political orientation. The growth of religious parties followed Saddam’s ruthless elimination of all political entities other than the Ba’ath party. Places of worship became centres of political agitation and organisation.

Despite popular myths, the majority of Ba’ath party founders were Shia. However, Iraqi Ba’athist ideology always had a racist dimension against the Kurdish people and non-Arabs – as well as a class orientation, when in power, that marginalised millions in the poorest sections of society, mostly in the south. Southern Iraq and some areas of Baghdad, populated by mostly Shia migrants from southern rural areas, have historically been home to the poorest people.

Iraq’s biggest mass organisation from the 1940s to the 60s was the Iraqi Communist party, founded in 1934 by activists from all religious and ethnic backgrounds. It was the strongest party even in Iraqi Kurdistan, and remained a mass party until its leadership decided to join Saddam’s regime in 1973 – against the wishes of most party members. Saddam launched a vicious campaign against the ICP in 1978-9, and the party lost its raison d’être after joining the Iraq Governing Council set up after the occupation in 2003.

Commentators on Iraq often refer to ethnic wars waged against its Kurdish people. They fail to mention that none of these wars were popular but were ruthlessly pursued by repressive regimes, particularly Saddam’s.

One of the greatest testaments to the tolerance that exists between the various communities in Iraq is that Baghdad still has up to a million Kurds, who have never experienced communal violence by Arabs. Similarly, about 20% of Basra’s population is Sunni. Samarra, a mostly Sunni city, is home to two of the most sacred Shia shrines. Its Sunni clergy have been the custodians of the shrines for centuries.

Every tribe in Iraq has Sunnis and Shia in its ranks. Every town and city has a mix of communities. My experience of Iraq, and that of all friends and relatives, is that of an amazing mix of coexisting communities, despite successive divide-and-rule regimes.

The most serious sectarian and ethnic tensions in Iraq’s modern history followed the 2003 US-led occupation, which faced massive popular opposition and resistance. The US had its own divide-and-rule policy, promoting Iraqi organisations founded on religion, ethnicity, nationality or sect rather than politics. Many senior officers in the newly formed Iraqi army came from these organisations and Saddam’s army. This was exacerbated three years ago, when sectarian groups in Syria were backed by the US, Turkey, Saudi Arabia and Qatar.

It is this officer class that this month abandoned Mosul and a third of Iraq’s territory to the terrorists of Isis, beefed up by thousands of foreign fighters, members of Saddam’s Ba’ath party, and the Islamic party (a branch of the Muslim Brotherhood). It has also become clear that leaders of the Kurdistan regional government have expanded their control and implemented a de facto ceasefire with the sectarian insurgents. It is also significant that the officers who abandoned Mosul and other areas without firing a bullet fled to Kurdistan.

Whether Iraq can survive this most serious threat to its existence remains to be seen. But those who claim it could only have peace if it is divided into three states do not appreciate the makeup of Iraqi society – the three regions would quickly fall under the rule of violent sectarians and chauvinists. Given how ethnically and religiously mixed Iraq’s regions are, particularly in Baghdad and central Iraq, a three-way national breakup would be a recipe for permanent wars in which only the oil companies, the arms suppliers, and the warlords will be the winners.