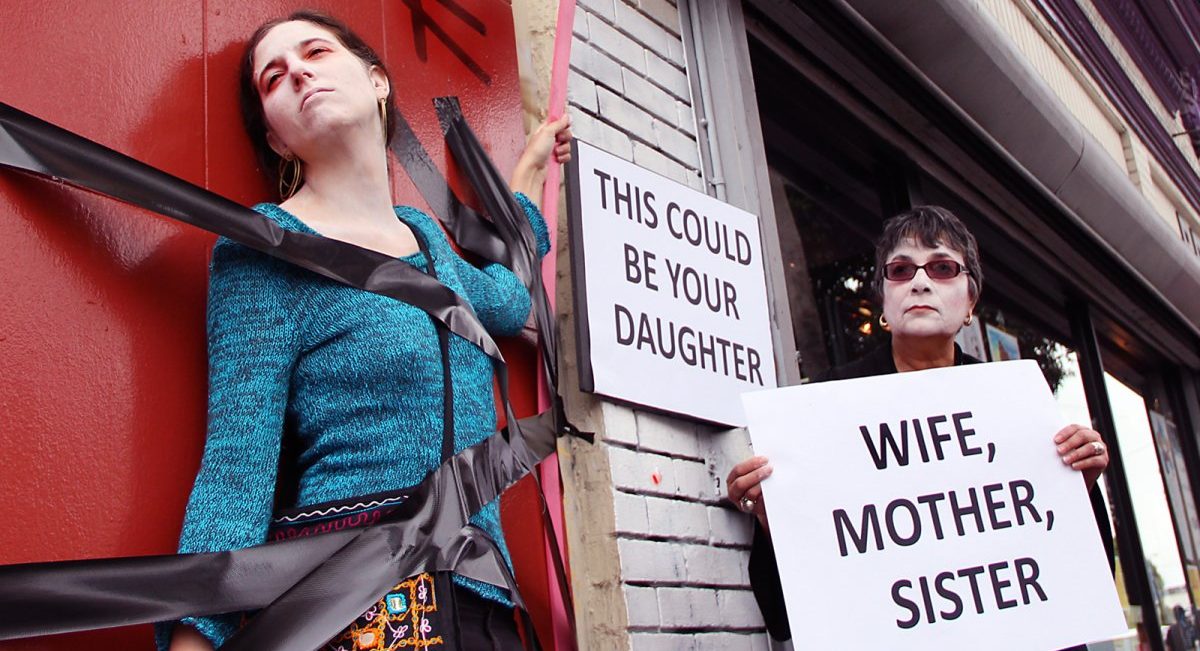 Note: The Women’s March on the Pentagon being organized by Cindy Sheehan is an example of women who are organizing to show women oppose war.  KZ

I hear a Me Too. It’s not a neat hashtag, I can’t heart or retweet it. The voice is bloodied and choked, burned and forgotten.

For the last few months America has been having a conversation that is most often not welcome  at the dinner table or the nightly news. Multitudes of women and a few men have come forward to expose sexual abuse by powerful men. Social and corporate media have been a buzz with new accusation after another. Many of the powerful men were fired from their positions as a result–a shocking phenomena in a country where most rape victims are treated as criminals.

While a movement to hold sexual abusers accountable is necessary, a movement born in the US and embraced by people with power is likely to be limited by bourgeois feminism and American exceptionalism. Many in congress have adopted #MeToo with conservative house speaker Paul Ryan stating “sexual harassment in America is absolutely pervasive and it’s got to go and we need to end it”. An ironic comment from someone who enthusiastically voted to violate the human rights of millions of people.

When movements are co-opted by the ruling class, the potential of the movement becomes limited to keep the scope within parameters that work for them. US lawmakers like Paul Ryan are sitting on a dirty secret–the depraved wars waged against the people of the Third World for the benefit of the US ruling elite. Wars where the invaded population is assaulted not just with bombs but with brutal sexual assault and rape on an everyday bases.

Let’s take #MeToo where it hasn’t gone: to speak for the girls, boys, women, and men raped due to US Wars—our government’s invasion of their national boundaries.

War is by definition rape. It is the unwanted invasion of land, the peoples’ body. It is non consensual penetration of bombs and drones on the daily life of dark skinned people in nations far away.

Very few Americans say that they are pro-rape but many are pro-war or indifferent. How come a nation of inter-sectional feminists, leftists, Hijab respecters, Pussy hat knitters, Black Lives Matter chanters, human rights warriors, immigrant defenders, fetus worshipers, and gun controllers, keep tiptoeing around the enormous monster in the room?

The bombs and bullets we banish from thought by changing the channel, are unavoidable to their targets.

Abeer was 11 years old when the US invaded her country, Iraq, in 2003. Three years later a group of US soldiers planned her rape over a game of cards. They waited for the fall of night and invaded her family’s home. She endured hearing her parents and little sister being killed as she fought her rapists. In the second it took sweaty fingers to ignite a gun aimed at her head, young Abeer’s life was over.

Rape in US wars is not the deviance of a few bad apples, it is a documented strategy used by the US defense apparatus . When therape and torture scandal at Abu Ghraib, the US run prison in Iraq, was exposed, Brig General Janis Karpinski admitted that this grade of rape and torture  came directly from Military Intelligence, the CIA, and private contractors.

Hardened criminals and terrorists didn’t fill Abu Ghraib. Ordinary Iraqi citizens ruitenly were rounded up and thrown in the literal hell hole because for the US military, the line between civilians and “the enemy” is microscopically thin. In practice, civilians are the enemy.

Iconic investigative journalist Seymour Hersh revealed in a couple of speeches that Iraqi mothers held at Abu Ghraib were forced to watch as their young boys were raped in front of them. A former Iraqi detainee testified to the rape of a teenage Iraqi boy by a US military personnel at Abu Ghraib.

The atmosphere of rape savagery is all consuming in US war zones. The first American women  to die after the invasion of Iraq was 19 yr old soldier Lavena Johnson who was found severely beaten, raped and murdered in a tent belonging to the defense contracting firm Kellogg Brown& Root (KBR).  Also in 2005, defense contractors from the same firm raped and beat their female colleague so badly she had to have her breast implants removed. KBR continued to win competitive and lucrative contracts from the government following Lavena’s murder.

Rape cards—photographs of acts of rape were traded like baseball cards by US personnel in Iraq. When there was push to release hundreds of thousands of such images to the US public, US decision makers decided they were too disturbing to release.

PTSD is not only suffered by those who get hurt in war but also by those who commit crimes in war. War is a horrific nightmare that makes monsters of men.The atmosphere of chaos in war zones is intentionally created by decision makers by utilizing the violent masculinity, white supremacy, and patriotic bigotry that is the life blood of this settler colonial nation.

The youth, like Lavena Johnson,who join the military for a better future are victims of the US ruling class–their bodies are offered up to shrapnel and their minds are made into psych wards. US wars are the wealthy using the poor to accomplish their agenda of  wealth accumulation. The movement for free college is not simply about affordable education but an economically secure and fulfilling future for low income youth that doesn’t involve doing the dirty work of the wealthy.

But of course, the ultimate victims are the youth of the invaded population, dead before they have a chance to contemplate the sunrise over the misty desert air of their homeland.

The most American thing is not to be able to see our American privilege. We live in a land where our elected officials and their billionaire backers wage a nightmare called war on the rest of the world. Forget Donald Trump’s wall, how about the borders on our hearts that makes us so removed from the struggles of people from the so called “Third World”. Ironically the Third World’s problems are our government and our military.

So what do we do? How do we move forward in this politically hot moment where the planet’s future is in flux, waiting to be caught by Nazis OR the dark skinned hands of justice.