The Silver Bullet To Stop The Corporate State Pillage

Every year a certain number of our soldiers decide they’d rather not be involved in shooting people they don’t know so that ExxonMobil can have more oil or Lockheed Martin can make more cash or MSNBC / Fox News can give their hosts topics for their upcoming poetry books. Basically, these soldiers do something horrifying, something terrible, something often called “treasonous” … They — wait for it — think for themselves!

Nothing is more frightening for our endless war machine than a military grunt who thinks for him or herself. They’re supposed to do nothing more than follow orders. They’re supposed to ask a superior officer for permission to wear a different color pair of socks. That’s right — the biggest, toughest gladiators in our society have to get authorization to switch from boxers to briefs.

I’ll get to what this has to do with our inverted totalitarian corporate pillaging in a moment.

One of the more notable soldiers who stood up this year was Spenser Rapone — a second lieutenant discharged on June 18, 2018, for disparaging the U.S. war machine online and promoting a socialist revolution. (Clearly our enormous globe-spanning military complex can obliterate any possible enemies except independent thought, which promptly turns it to a mush akin to pea soup.) Apparently reading about the true story of Pat Tillman pushed Rapone toward the realization that he was a pawn in the middle of a massive lie.

“Pat Tillman showed me I could resist the indoctrination,” Rapone said. “I did not have to let the military dehumanize me and turn me into something monstrous. When I learned how his death was covered up to sell the war, it was shocking.”

To sell the war. Why is it they would need to sell a war? Oh, I know — because it’s completely unjustifiable. For activities people naturally agree with or enjoy doing, you don’t have to advertise them. Like you don’t see ads saying, “Hey, feed your kids. … Don’t forget.” Or a commercial saying, “Try having sex some time. It’s fun!” That stuff comes pretty naturally. But you do need promotion (read: media propaganda) for our endless war games because it does notcome naturally to most of us. War comes naturally to sociopaths, and then it’s sold to the rest of us, much like a used car or an ill-advised timeshare in Cleveland.

But the military is not the only place where conscientious objectors play a role. It might be the only one where walking away can get you locked up in prison spending your days sewing McDonald’s uniforms, but there are a lot of moments in our messed-up world when you can turn your back and do the right thing.

For example, fewer and fewer people are willing to do the job of killing millions of animals every year. A recent report “revealed that staff shortages at slaughterhouses [in the U.K. were] threatening Christmas sales. Some 10,000 positions are unfilled at major abattoirs. … The report explains that for most potential applicants, the industry’s low pay is not the problem but that ‘people simply do not want to do this work anymore.’”

Oh come on, you fragile snowflakes! “Ewww, I can’t handle chopping the heads off a thousand pigs a day. It hurts my feelings to end the life of hundreds of sentient beings who haven’t done anything to me to warrant such treatment. WAAH! I don’t like loading buckets of adorable chickadees into the grinding colander so they can be turned into a meat milkshake that will ultimately be served to a labradoodle or a puggle. BOO HOO HOO!” (I might have made up the term “grinding colander.”)

In all seriousness, working at the killing fields of a factory farm has life-long impacts that no one talks about. (And by “no one,” I mean the media and our politicians and most everybody else.) As the Guardian reported, “Slaughterhouse work has been linked to a variety of disorders, including post-traumatic stress disorder and perpetration-induced traumatic stress. One pig slaughterer said the ‘worst thing’ about the work is its ‘emotional toll’. … A worker at a chicken plant said one of his colleagues was ‘hauled off to the mental hospital’ after he ‘kept having nightmares that chickens were after him.’” (It’s tough to say what the chickens would’ve done with him had they caught him. Professional torture is made difficult by a lack of hands.)

These workers who have walked off the killing floors should be honored as conscientious objectors. They should be rewarded for realizing it’s better to get paid to hand out coffees at the coffeehouse than death sentences at the slaughterhouse.

And conscientious objection happens in the big tech world too. This past May, a dozen Google employees quit to protest the company’s role in drone-killing technology created for the Pentagon, and another 4,000 signed an internal petition to stop the partnership.

There have been many great objectors in our police forces, too. Captain Ray Lewis was in the Philadelphia police force for 23 years. Then he became an outspoken critic of police abuse, militarization, excess force and the inequality that has hollowed out our society like an aggressive virus. He shows up to protests in full uniform and stands on the front lines to help remind the other cops what they should be protecting — and it’s not oil pipelines or Wall Street banks. Perhaps most importantly, he does it all with a mustache that looks like it houses squirrels in the winter. It’s quite possible that without the facial hair, not a single police officer would give a shit. However, you can really reach a cop through his ’stache. (Sorry, his or her’stache.) 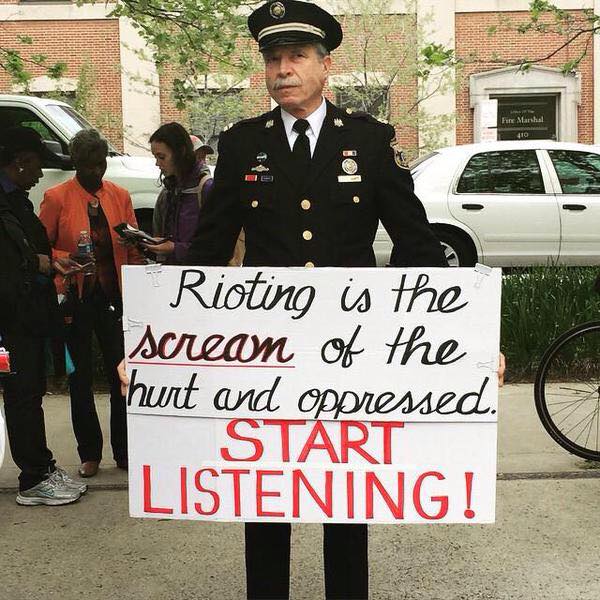 Conscientious objectors even show up in the grand hallways of the famously lockstep mainstream media outlets. Just last week, veteran national security journalist William Arkin left his job at NBC and MSNBC and basically blasted them in an open letter “… for becoming captive and subservient to the national security state, reflexively pro-war… and now the prime propaganda instrument of the War Machine’s promotion of militarism and imperialism.” Of course, anyone who regularly reads independent outlets like Truthdig would probably say Mr. Arkin is roughly 30 years late to this realization. Yet it still takes nerve, gonads and a spine to turn against your employer while calling them out for manufacturing consent for hundreds of thousands of innocent deaths. (Certain types of deep-water fish are made up of only nerves, gonads and a spine, and they’re constantly being insolent to their employers.)

The truth is, we the people may not have that much power. We don’t control our democracy anymore now that every decision is based on money. We can’t instantly change the entire system. But we have one very powerful tool — we have the power of our labor.

Millions of Americans, and hundreds of millions worldwide, work for corporations or organizations that do evil every single day. This list includes:

The list is endless, and ALL of these people have the ability to say “I object. I will not help with your villainy.”

If they all objected — we would see a different world overnight.