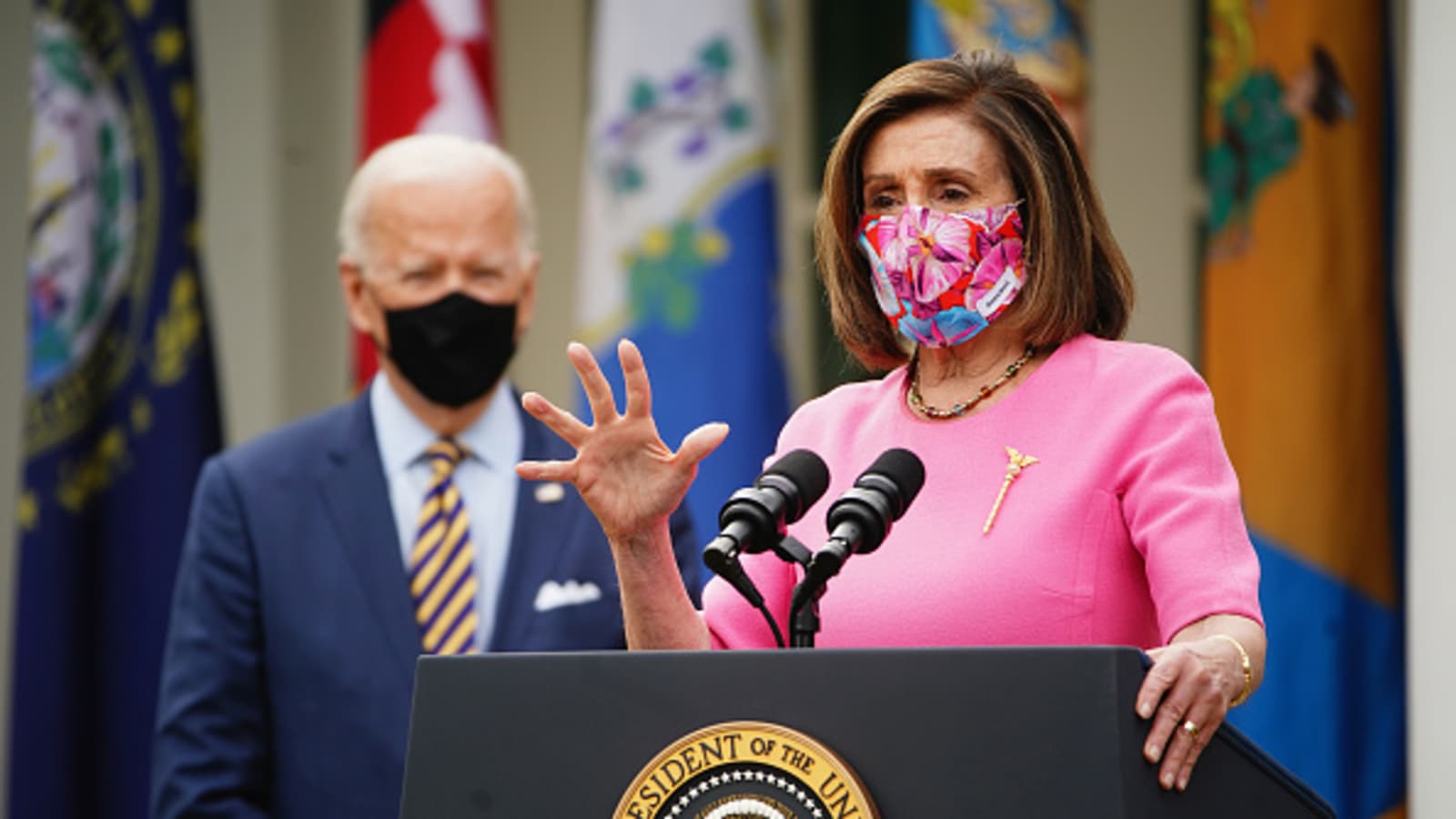 The ‘Smoke And Mirrors’ Billionaires Tax

Above photo: House Speaker Nancy Pelosi during an event in the Rose Garden of the White House in Washington, D.C., on Friday, March 12, 2021. Jim Lo Scalzo | Bloomberg | Getty Images.

After a well-choreographed internal party policy debate dance this past summer, Biden and party leaders, Pelosi and Schumer, today threw in the towel and capitulated to their blue dog Democrat Senators, Kyrsten Sinema and Joe Manchin, on how to pay for Biden’s ‘Build Back Better’ bill.

The Democrats are now embracing two smoke and mirrors funding proposals for the Build Back Better bill:

The two tax proposals apparently now replace the previous tax measures that were to pay for most of the Build Back Better bill—i.e. the increase in the corporate tax from 21% to 26% (after Trump cut it in 2017 from 35%); the former proposal to raise the top personal income tax rate back to 39% (from current 37.5%); and proposals to increase funding the IRS to go after tax cheats that cost the US Treasury $750 billion in avoidance and fraud, according to the IRS.

With the introduction of these two ‘smoke and mirrors’ tax measures, negotiations enter the ‘end game’ phase of the corporate strategy to beat back the two stimulus bills—the traditional Infrastructure Bill (now $0.55T new spending reduced from $2.3T) and the Human Infrastructure/Reconciliation Bill (now $1.75T reduced from $3.5T).

The strategy to slash the level of spending in both bills has been driven behind the scenes by the corporate wing of the Democrat party, with Senators Manchin and Sinema as their negotiating ‘point persons’.  The strategy has always been to cut the magnitude of spending on both bills so deeply that it would not require actual tax hikes on corporations and wealthy individuals of any significance. What was left in terms of reduced spending levels could then be funded by means of various ‘smoke and mirrors’ measures—i.e. by moving money around from other current programs or by transferring funds from other government slush funds.

Smoke and Mirror funding has already been accomplished with regard to Biden’s traditional Infrastructure bill. Phony financing now cover that bill’s $550 billion new spending.  None of Trump’s 2017 tax cuts of $4.5 trillion were reversed to provide the funding for Biden’s Infrastructure bill.

Now the same tax ‘smoke and mirrors’ funding is being proposed to fund the Build Back Better bill.  Like the original Infrastructure bill, the Build Back Better too has been slashed, from $3.5T this past summer to $1.75T at latest estimate—and likely going lower now that Democrats have just made yet another concession to Manchin and withdrawn the paid leave provision from the bill.

Also like the Infrastructure bill, the Build Back Better bill no longer requires major reversals of the Trump tax cuts. Democrats have withdrawn the original Biden proposal to raise the corporate tax back up to 26% rate from Trump’s 21%. Ditto for the proposal to raise the personal income tax rate on the wealthiest back to 39%. And gone as well is giving the IRS more money to claw back the $750 billion.

Replacing these provisions are the two new tax proposals announced yesterday—i.e. a 15% Minimum Corporate Tax and a new tax on some of the US 745 billionaires.

But the billionaires tax and the 15% minimum corporate tax are both ‘smoke and mirror’ tax hikes that won’t generate revenue even remotely equivalent to the tax hikes previously proposed but now withdrawn to satisfy Manchin and Sinema in the Senate.

All the details are yet to be reported, but it is clear that the billionaires tax is a sham. From what is known, it will tax only a small subset of the US 700-800 billionaires. Only those whose assets are worth more than $1 billion and which generate $100 million in annual income for three consecutive years!

So Billionaires like Elon Musk, Jeff Bezos and Zuckerberg only have to figure out how to hide, divert offshore to some tax shelter, or legally lie in just one of the three consecutive years to ensure his income is less than $100 million that one year.

Other questions remain such as: what assets will be countered toward the $1 billion? Will assets residing offshore in financial markets, in real property, and real investments there be included in determining the $1 billion? If so, how will Congress or the IRS obtain data on offshore assets when governments there typically refuse to share it with the IRS? And how about assets parked in tax havens like the Cayman Islands—or Vanuatu, Isle of Man, Bermuda or any of the score of useful hideouts by billionaires and their corporations?

And what forms of income will qualify toward the $100 million?  Are we talking about pre-tax income or after-tax? Gross income or net income? Interest, rent or capital gains income? How about assets and income from opaque derivatives transactions? Or unreported cryptocurrencies’ appreciation?

And what assets or income will be exempted from the calculations once the thousands of corporate lobbyists now running around Washington DC get their hands in the political till? One can bet the billionaires tax will include a mountain of exclusions, exemptions, and delayed effects.

So forget about ever seeing the billionaires tax actually producing any revenue. It’s just a marketing tool, peddled by Democrats to the media to make it appear they’re taxing the super-rich in order to pay for what’s left of Biden’s human infrastructure/Build Back Better bill.

The second proposal—a 15% Minimum Corporate Tax—is just as phony as the billionaires tax.

First of all, even Senate Democrat Finance Committee chairman, Ron Wyden, admits it will generate only around $30 billion a year in tax revenue.  The estimated $30 billion/year revenue will be just enough to cover the annual increase in the Pentagon’s budget this year and years to come.

The 15% minimum tax applies, moreover, only to corporations that earn annual profits of more than $1 billion over three years.

The same criticisms made of the billionaires tax apply again here as well: what three year period are we talking about? Starting when? Is it $1 billion profits every year or just $1 billion averaged over three years? If the latter, it will have to wait until 2025 to realize any tax revenue.

Basing the qualification on annual profits levels raises the same issues of corporations—like individual billionaires—diverting profits to their offshore subsidiaries, or hiding them in offshore tax shelters, or allocating them to various internal slush funds (as corporations do) to reduce the bottom line ‘profits’ reported to the IRS.

And how are profits defined? Is it pre or after tax profits? Profits from interest, rent or sales? And what about financial portfolio profits from investing in stocks, bonds, derivatives, and other financial markets? It’s a well known fact that at least one third of big corporations’ profits come from financial portfolio investments. How does the IRS get accurate global data from other countries that gladly shelter US multinational corporations’ profits made in their financial markets?

Corporations in the US also enjoy today—as they have for decades—what’s called ‘loss carry forward’ in calculating their taxes due to the IRS. They can reduce current and future taxable profits by losses incurred in the past. So does that provision mean corporations that might otherwise qualify under the $1 billion in profits requirement will be able to reduce those future profits, to avoid the 15% tax, by ‘carrying forward’ losses for the 2020 pandemic year?

The 15% Alternative Minimum Tax proposed is but a shadow of the 15% corporate alternative minimum tax that existed before Trump passed his $4.5 trillion tax cut for corporations and investors. In decades past corporations had to pay at least 15%. Bush Jr., then Obama, both let that slide until Trump ended the charade by deleting the corporate Alternative Minimum 15% tax altogether in 2017.  So now the Democrats are proposing bringing it back—but as a joke, applied to only 200 corporations at most, according to their Senate finance committee chairman, Ron Wyden.

It should be noted that both Manchin and Sinema have voiced support for both these phony tax proposals—the billionaires tax and the 15% minimum corporate tax on just 200 of the millions of US corporations.

Both tax measures are just smoke and mirrors, intended for public consumption in order to make it appear the Biden administration is going after the super-rich to fund its Build Back Better bill—or what’s left of it as it shrinks daily.

The real purpose of the two phony, smoke and mirror tax measures is to cover up the capitulation by Biden, Pelosi, and Schumer to Manchin-Sinema—that is, the corporate wing of the Democrat Party standing in the shadows behind them.  The two measures are but empty place-holders  to the now withdrawn real tax hikes that were formerly on the negotiating table.