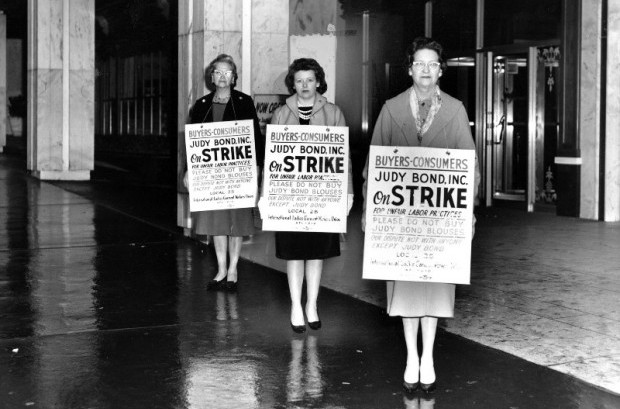 Workers are less scared of organizing when the press is covering them. The solution? More labor reporters in the South.

The striking thing about being a recent northern immigrant to the South is how often I walk into a bar and hear people talking about Bernie Sanders. As an outsider to the region (I’m a native of the East End of Pittsburgh), I sometimes find it incredible: Go into any bar in the South and all the young folks are feeling the Bern. While Sanders lost big in these states, he did win among southern Millennials — yet another indication that the South is changing a lot faster than some folks realize.

Yet people up North are always shocked to hear this. Too often, the only depictions of the South that we get via national news are cartoon caricatures of Confederate flag enthusiasts. As a result, we often forget about the progressives in the South. In part, the Internet has played a role in creating them, in replacing local news outlets as the place to follow national politics. People in the South read the same blogs we do; their Tinder profiles include witty references to Michelle Obama. I meet young people in the South all the time who ask me, “What was it like before Obama?” These people literally don’t remember an America that didn’t have a black president or an Occupy Wall Street movement. They aren’t yokels, and they aren’t products of the Old South — they are products of a digital South in the age of Obama.

Southern workers are also facing a rapidly expanding economy — in part from a growing technology and auto industry — even as many citizens know that they aren’t getting a piece of the pie. Just as attitudes about race are changing in the South, attitudes about organized labor are changing just as rapidly.

If those number surprise you, that might be because there is not a single full-time labor reporter anywhere in the South.

Think about that: There are 50 million workers in the South and not a single full-time labor reporter. Currently, there are far more reporters covering other reporters than there are covering the efforts by workers seeking a better life in the South.

If unionization in digital media has proved one thing, it is that coverage of workers unionizing leads to even more organizing.

If unionization in digital media has proved one thing, it is that coverage of workers unionizing leads to even more organizing. Compared to other union drives, the digital media unionization movement got a disproportionate amount of coverage — when I was fired at Politico, there were stories inNewsweek, New York, NPR, the Washington Post, and the Huffington Post. Most labor organizers struggle to get a story covered; in my case, since we have an army of media reporters, my story got a lot of attention. It would be nice if the workers I write about got as much coverage as I did.

Reporters know that if they got fired or screwed over that their stories would go viral. What is more, the constant coverage gave encouragement to media workers that they were part of a broader movement, and helped teach isolated reporters how to stand up for our rights.

After I was fired at Politico, there was a fair bit of publicity denouncing the company. As a result of the publicity, I was able to secure a year’s salary from the publication as part of a National Labor Relations Board settlement. I decided to use the money to return to Chattanooga, where, two years before, I had covered the bitter defeat of the United Auto Workers drive at Volkswagen.

If we want to organize the South, workers here need to know about the massive organizing already going on around them. Fortunately, there is a growing Southern press movement.

NewsGuild activist David Forbes has used his community connections to launch The Asheville Blade, which has done great reporting on the affordable housing crisis plaguing rapidly gentrifying Asheville. In 2014, Georgia native and Rhodes Scholar Sarah Bufkin worked with a team of Obama campaign veterans in North Carolina to launch Scalawag Magazine, which has sought to cover the activism in the South that so many in the North ignore. Finally, right here in Tennessee, The Bitter Southerner continues to issue a weekly sample of long-form journalism about the South like its recent look at the defunding of public pools to avoid integrating them.

While these efforts are great, they don’t have nearly enough funding or staff to produce more than a handful of regular articles on the South. Workers in the South deserve more — they deserve the kind of wall-to-wall coverage that digital media workers get when we organize.

Here’s the problem with the media strategy of America’s national unions: Organized labor spends tens of millions of dollars each year on public relations, but often there are merely hiring people to pitch labor stories to reporters who just don’t exist. If organized labor — on the national level — is serious about organizing the South, then it must invest in a movement of digital media news co-ops throughout the South.

It’s up to us as media workers and workers of all types to re-build that press. At Payday Report, the news co-op that I co-founded, we’re also trying to help other publications get off the ground. In that effort, we have launched a survey to identify where we can help start new Southern publications and build a movement to support them.

If we are serious about organizing the South, then we must build a movement to write about the South.

From the New Deal to the Civil Rights movement, the South has always been an anchor of massive historic change. The South is leading the nation in union organizing right now, yet no one knows it.

Still, if the story gets told properly, it won’t just be about the South; in fact, it could inspire an entire nation to revive the labor movement.