Appalachia’s buried treasure in natural gas means pipelines, and the controversy that comes with them, are headed south.

The largest gas field in the world lies deep below the shimmering Persian Gulf, surrounded on all sides by wealthy OPEC nations. The second-largest sits largely beneath rural Appalachia.

And as political opposition to fracking and pipelines builds in the Northeast, that gas glut is increasingly heading one direction: south.

Once fueled by the nearby mountain coal mines, the South is set to become one of the biggest benefactors of America’s natural gas boom. But first, the region will have to build the pipelines to transport it.

“If you look at the numbers this whole (Appalachian) region would be the second-largest gas producing country in the world,” says Akos Losz, a research analyst at Columbia University’s Center on Global Energy Policy. “One way or another, gas has to find a way out of this region and the Southeast is one of the natural destination markets.”

The proposed Atlantic Coast Pipeline, a $5 billion behemoth of a project spearheaded by Dominion Energy and joined by other energy utilities, would do just that. The pipeline would begin beneath northern West Virginia, cross the spine of the Appalachian Mountains, split Virginia and wind its way to North Carolina’s southeastern corner, the end of its 600-mile journey. And after years of legal and political wrangling, the proposal’s journey through the approval process is almost complete.

Outside of the official process, however, the project has faced fierce opposition. Environmental groups have criticized the project’s reliance on hydraulic fracturing, or fracking, whereby underground shale is blasted with a combination of water, sand and chemicals to release natural gas. Then there’s the pipeline itself: Building an underground pipeline over steep mountainous terrain, within porous limestone formations, under protected forests and through productive valleys presents another set of environmental concerns, according to critics.

In Virginia, the pipeline would cut through the scenic Shenandoah Valley, where locals say tourism and farming could be disrupted.

“As a private landowner, they’re taking my land as a private corporation to benefit corporate shareholders at my expense,” says John Cowden, who owns Fort Lewis Lodge, a country inn located near the pipeline’s path in Bath County, Virginia. “They haven’t demonstrated need (for natural gas) – it’s just corporate profits – so I’m opposed economically and environmentally.” 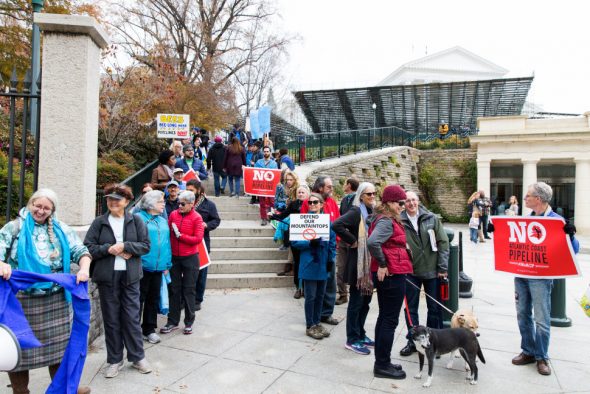 Protesters who oppose the Mountain Valley and Atlantic Coast pipelines get ready to walk around the Virginia Capitol Square in Richmond on Dec. 2, 2017. (DANIEL SANGJIB MIN/RICHMOND TIMES-DISPATCH/AP)

In North Carolina, the pipeline would go through some of the state’s poorest areas. All eight of the counties in its path have poverty rates over 15 percent, higher than state and national averages.

And as with the similar projects such as the Keystone XL and the Dakota Access pipelines, the Atlantic Coast Pipeline would traverse tribal land and disproportionately affect Native Americans.

Though they make up only 1 percent of the state’s population, 13 percent of the people impacted by the pipeline are Native Americans, says Ryan Emanuel, a professor at North Carolina State University, whose analysis of the project’s environmental impact statement was published in the journal Science last year.

“The environmental impact statement is blind to all these issues of indigenous people. In North Carolina we have the largest Native American population east of the Mississippi,” Emanuel says.

“On behalf of the tribes and indigenous people I work with, I’m concerned they were left out of the decision making process.”

Despite these concerns and others, the Atlantic Coast Pipeline has steadily progressed toward approval. The Federal Energy Regulatory Commission approved the project in the fall, and gave the green light for tree-clearing to begin along the pipeline’s path in January on land not requiring environmental approvals.

North Carolina was one of the last states to approve the project. The state’s Department of Environmental Quality asked for more detail on the proposal at least 10 times before approving a crucial water quality permit on Jan. 26. That same day, North Carolina Gov. Roy Cooper announced a $58 million fund – paid for by the energy utilities behind the project – would be created for use in mitigating the pipeline’s impacts.

“The Atlantic Coast Pipeline meets a vital energy need for our state and moves us away from coal-fired power plants,” Ford Porter, the governor’s spokesman, said in a email statement to U.S. News. “The mitigation fund will provide additional resources for environmental mitigation on top of what is required in the permit as well as investments in renewable energy and economic development.”

Supporters in statehouses and elsewhere point to the economic benefits as a main reason the pipeline needs to be built.

The companies behind the project have estimated the pipeline’s construction efforts could support 17,000 jobs, and eventually generate millions in property tax revenue for local governments. They also claim the pipeline would reduce electricity rates for consumers in the affected states, though that has been disputed.Then there’s the simple fact that all that natural gas has to go somewhere.

“When you increase the capacity or level of production you have to have a corresponding increase in transportation infrastructure. It doesn’t do much use to have all this production without some place for it to go,” says Charles Hughes, an analyst at the Manhattan Institute, a free market think tank. Pipelines “can help transport gas where it needs to go, which can lower costs for consumers.”

The size of the reserves of the Marcellus Shale formation, the main source of this natural gas boom, will likely mean more pipelines in the South’s future. The ACP is one of 11 proposed pipeline projects in the Southeast.

“It’s very difficult to build pipelines to the Northeast and New York because there’s massive opposition against any new pipeline development, so the Marcellus development is going to the Midwest and also to the Southeast,” Losz says.

Pipeline supporters also point to recent cold snaps as evidence of the need for more pipeline infrastructure. When temperatures drop, demand for natural gas goes up as customers crank up the heat, which means higher gas and electric bills as energy utilities stretch to meet the increased need.

“In the Northeast, especially in the recent cold snap, they saw the price of natural gas go to record levels,” Hughes says. “They have limited ways to transport natural gas to the existing area.”

“Cheap gas it looks like will stay here for some time to come and coal is not competitive,” Losz says. Even the current 11 proposed pipelines might not be enough.

“Those new pipelines might get filled up – we might run out again of takeaway capacity fairly soon if we don’t keep building,” he says.

That’s a daunting idea to the pipeline’s critics, despite the promised economic benefits.

“I’ve been around long enough to see these things don’t work out in process as they are on paper. A lot of times the communities are on the receiving end on the failed promises,” says Emanuel, the professor.

“These arguments about meeting the needs of energy customers during cold snaps or energy independence, these are ancillary arguments to the main reason to build these things which is to make as much money as they can.”