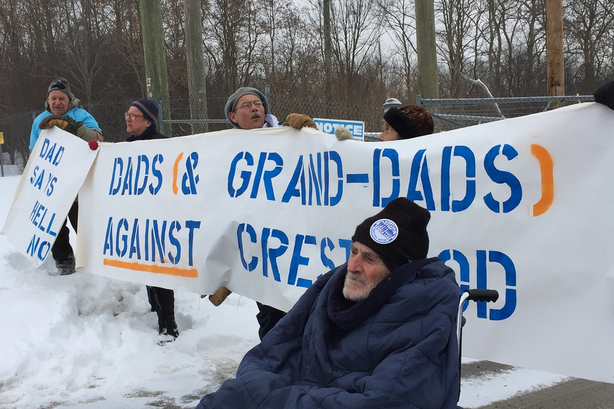 The Speech I Gave To FERC From Baggage Claim Area 3

Photos courtesy of We Are Seneca Lake

FERC disallows ex parte conversations with staff about projects that are still under review in some way—and that’s a policy I agree with. Thus, I spoke not about the specific risks and harms of the Seneca Lake gas storage expansion project, but instead addressed my comments to larger concerns about the agency’s capitulation to the oil and gas industry. Ulimately, FERC is overseen by President Obama and reflects his failed energy and climate leadership, in spite of good rhetoric. The administration’s unquestioning devotion to natural gas is reflected in remarks made by Commissioner LeFleur in a recent speech before the National Press Club, and her words became the starting point for my own:

We’re very fortunate to have abundant and relatively affordable domestic natural gas … But utilizing that gas to meet climate goals require the expansion and construction of gas infrastructure, both pipelines and compressor stations, to get it to where it needs to be to keep the lights on. But while gas is critically important to our climate goals and other environmental goals, it has issues of its own. Pipelines are facing unprecedented opposition from local and national groups including environmental activists. These groups are active in every FERC docket, as they should be, as well as in my email inbox seven days a week, in my Twitter feed, at our open meetings demanding to be heard, and literally at our door closing down First Street so FERC won’t be able to work.

We have a situation here. We take the views of all stakeholders seriously and try as hard as we can to thoroughly consider issues that are relevant to the decisions we’re required to make. But FERC’s responsibility under the Natural Gas Act, because we’re a creature of Congress, is to consider and act on pipeline applications after insuring that they can be built safely and with limited environmental impact.

My remarks prompted no questions from FERC staff. At the end of our meeting, I did ask one question of Commissioner LeFleur: “What message would you like me to bring back to the people of Seneca Lake?”

Her answer: “I would hope that you would tell them that you were listened to.” And then she added, “Of course, I can’t tell you how to feel.”

Here is the script of my prepared remarks:

I am a mild-mannered biologist and mother of two. Although I would much prefer to let the data speak, I have now twice received a 15-day jail sentence for trespassing in opposition to a FERC- approved project.

Before all that, I helped direct hundreds of written comments to FERC from concerned members of the public and have spoken at multiple public hearings and helped prep many others, including fellow scientists, to do so. What I learned from these experiences is that FERC doesn’t listen to impacted citizens or to independent science. It now seems to me that the public hearings and the collection of data are just boxes for FERC to check on its way toward indiscriminate, foreordained approval of whatever plan the oil and gas industry puts before it.

The data tell me that climate change—and the fossil fuel infrastructure that stokes its fires—are existential threats to my children and the entire generation of which they are a part. The World Health Organization is very clear on this point, and I have spent my professional life studying and writing about this evidence.

The Seneca Lake gas storage project near my home poses multiple risks to the safety and health of my children, as good science shows.

Yet FERC ignores and sweeps aside independent science that we submit in response to this and other proposed projects. It is this willful deafness of FERC to matters of ultimate concern and its willingness to play the role of good German in the face of an unfolding climate catastrophe that is the reason for the ongoing protests and civil disobedience.

We have now reached the straw-that-breaks-the-camel’s-back moment in the climate change story, and FERC is widely perceived—both inside the scientific community and out—as the agency that permits the piling on of even more straws even while blithely claiming that each straw poses only negligible risk for harm and must be evaluated individually and on its own merits.

The government’s job is to protect the citizenry and assure its security and well-being. And yet, by this blindered approach and by its commitment to further entrenchment and investment in fossil fuel infrastructure, FERC is a branch of government that seems satisfied with recklessness and reductivist thinking precisely at the moment in which ethos and wisdom are required.

FERC’s atomized, compartmentalized approach to decision-making likely served it well in the past. But a continuing refusal to look at cumulative impacts over time and space is anachronistic, dysfunctional and downright treacherous in 2015.

That is why I and many others are becoming reluctant civil disobedients in the face of FERC projects that are rolling over our communities and jeopardizing our health and our climate.

I am a founding member of Concerned Health Professionals of New York and co-author of a massive compendium of evidence documenting the multiple harms and risks of fracking to public health and to the climate. In that capacity, I have seen the power of science at work in public forums wherein science informed a powerful citizens movement that, in turn, served as a megaphone for science. I have seen the power of science at work within our regulatory agencies as the state of New York deliberated the question of whether to permit or prohibit shale gas extraction via high-volume hydraulic fracking. This was a long decision-making process. Over the years, many researchers and health professionals brought emerging data to the people directly, via teach-ins and the mass media, and to our public agencies and elected officials, via hearings and comment periods.

In the end, the evidence of the emerging science was determinative. Our state’s Department of Health, Department of Environmental Conservation and Governor Cuomo looked at the best data and made a wise, ethical and science-based decision. I am grateful to our governor for his courage in making it.

It is also a popular decision that enjoys the widespread support of a majority of New Yorkers, including those who live in frontline communities that would have been the first to get fracked. As a state, we are now engaged in a vigorous, creative transition to renewable energy. We are on the path, and we are on the march. It is very exciting. There is a new zeitgeist in Albany.

But, at the same time, from Port Ambrose to Seneca Lake, we are being threatened by FERC- approved, fossil-fuel infrastructure projects. They are a ball and chain that keep us bound to a ruinous past and thwart our progress. Pipelines. Compressor stations. LNG terminals. Gas storage in crumbly, lakeside salt caverns in the middle of wine country. These projects fly in the face of public health and climate science. They undermine democracy and self-determination. They undercut investments in renewable energy. They are out of step with our statewide ban on fracking and are turning our state into a storage and transportation hub for an export-oriented fossil-fuel industry.

And even our governor, our wise governor who is listening to the science and trying to lead our state to a renewable energy future, cannot say no to FERC. Your jurisdiction supersedes his. No state government can reject a FERC- approved project. [Author’s note: Governor Cuomo does have veto power over the Port Ambrose LNG terminal off the coast of Long Island.]

This, then, is the problem:

You don’t say no to the fossil fuel industry’s ideas through a process of wise, selective discernment, and we and our elected officials can’t say no to you. That is why you have a situation.