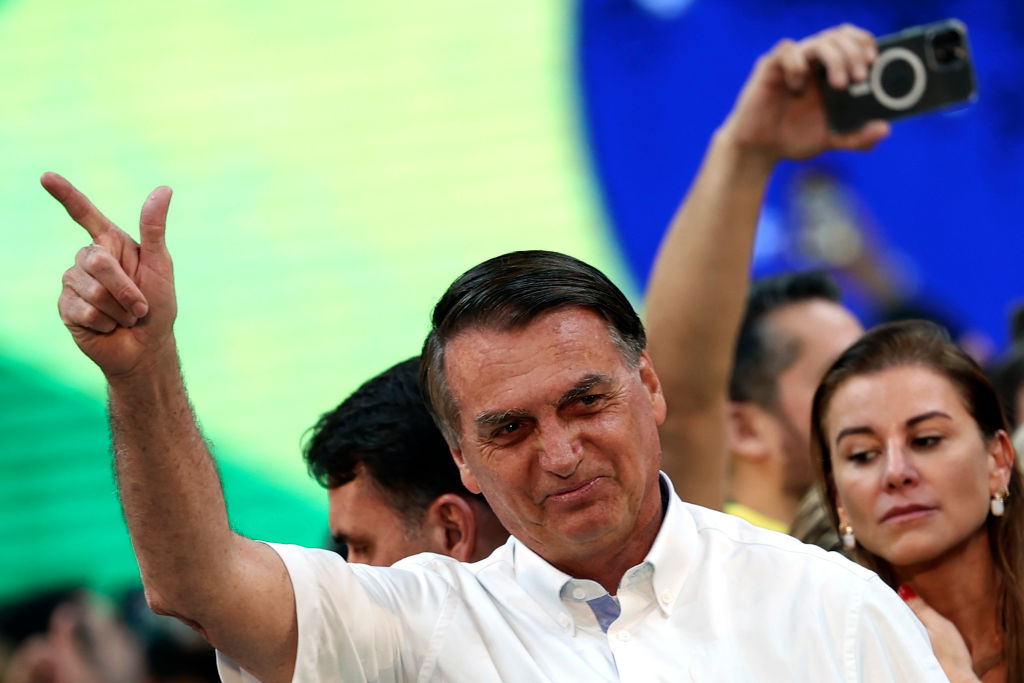 The Stakes In Brazil’s Election Couldn’t Be Higher

Above Photo: President of Brazil Jair Bolsonaro at the Liberal Party (PL) national convention where he was official officially appointed as candidate for re-election on 24 July 2022 in Rio de Janeiro, Brazil. Buda Mendes / Getty Images.

Ahead of October’s election, with leftist Lula leading the polls, fears are rising of a Bolsonaro coup.

The entirety of Brazil’s democracy is at stake.

After four years of a right-wing Bolsonaro government, Brazilians will vote for a new president on 2 October 2022. Former president Lula—currently high in the polls—is confronting an increasingly delirious incumbent, who appears to have threatened violent unconstitutional action should he lose.

Bolsonaro’s victory came two years after the impeachment of Workers’ Party president Dilma Rousseff in 2016, the first woman to be president. The Workers’ Party (aka Partido dos Trabalhadores, or PT) had held office since 2003.

The period 2010-2016 was dominated by the ‘credit crunch’ crisis that sent the world into turmoil, with a generalised economic contraction, huge indebtedness in the advanced economies, and a considerable reduction in the consumption of raw materials. Brazil was badly hit. By 2015 GDP had declined by three percent, inflation was high (10 percent), and public debt went through the roof to 63 percent of GDP, making it tough for the government to maintain its poverty-eradication social policies.

Brazil’s right wing capitalised on the crisis. A reactionary Movemento Brasil Libre (MBL) unleashed a wave of street protests that also fed on the Lava Jato investigation on corruption in Petrobras, one of the largest state oil companies in the world. This allowed Brazil’s right to create an atmosphere of instability which they would use both to impeach Dilma by a parliamentary vote on false charges of ‘cooking the books’, and to launch an anti-PT witch hunt, to which the global mainstream media contributed massively and daily. Brazil’s media was much worse.

The interim government of Michel Temer, riding on this intoxicating campaign, took steps to reverse the PT’s social policies, freezing state spending on health and education for twenty years.

What the MBL began would not be complete without removing Lula as a presidential candidate for 2018. Judge Sergio Moro was entrusted to conduct an investigation seeking to convict Lula on charges of corruption. Moro achieved this after a four-year investigation, leading to the former president’s illegal imprisonment for 580 days—first as an arrest, followed by a nine-year prison sentence in 2017, then increased to twelve years in 2018 when Lula appealed. Moro deployed every dirty trick in the lawfare arsenal to jail Lula, for which he enjoyed the full support of Brazil’s establishment and from the domestic and world mainstream media.

Fernando Haddad, the PT presidential candidate who replaced Lula, had barely three weeks to fight the 2018 presidential election. The generalised anti-PT climate created after Dilma’s impeachment and Lula’s imprisonment allowed pro-Bolsonaro businessmen to break all election norms and pay millions of dollars to inundate social media with fake news portraying Haddad ‘as a perverted monster, recommending the distribution of penis-shaped baby bottles to crèches and ‘gay kits’ teaching homosexuality in schools.’ Bolsonaro won in the second round with 55 percent of the vote.

Jair Bolsonaro is unashamedly racist, misogynistic, and homophobic. He has repeatedly insulted and denigrated women, the LGBT community, and Black and indigenous Brazilians. He openly supports the 1964-85 military dictatorship and dedicated his speech in support of Dilma’s impeachment to Colonel Ustra, who back in 1970 commanded her torture. That this type of hate speech is being uttered by the president represents a huge setback for democracy and human rights in Brazil.

Bolsonaro described Covid-19 as a ‘little flu’, advised people not to wear masks (which could cause pneumonia and death, he said), and claimed women could grow beards and people could turn into crocodiles as a result of the vaccines’ side effects. Brazil recorded 34 million cases and nearly 700,000 deaths, one of the worst tolls in the world.

Bolsonaro’s economic policies, meanwhile, saw spending on health fall drastically, along with spending on education. Between 2019-21 state expenditure aimed at women fell 46 percent. Bolsonaro has dismantled labour protections, frozen the minimum wage, and privatised the state electricity company, which generates 30 percent of the country’s energy, as a prelude to the privatisation of Petrobras. More than hundred state energy assets have also been privatised. Under his watch the deforestation of Brazil’s Amazon reached a record high in the first half of 2022 (1,500 square miles, 80 percent larger than in same period in 2018), and by mid 2022 it was estimated that 32 million Brazilians were suffering from hunger.

By contrast, during thirteen years of PT government, thirty million Brazilians were lifted out of poverty. By 2015 real wages were 78 percent higher than the accumulated inflation since 2002. Over 90 percent of beneficiaries of the poverty-eradication Bolsa Familia programme were women—68 percent of those being Black women—and unemployment fell to less than six percent, the lowest level in history. 214 technical schools and 18 state universities were created with free education at all levels made available to millions of students, many of whom were given scholarships (51 percent of those were women). 10.5 million low-income people were placed in 2.6 million houses through the housing programme, and basic healthcare reached 70 percent of the population—another historic record.

Bolsonaro’s disastrous mismanagement led his approval to sharply decline (to below twenty percent in November 2021), compounded by having to face a presidential contest against a greatly strengthened Lula, who was fully exonerated in 2021 by the Supreme Court of all charges of corruption. The latest Datafolha poll (20 Aug 2022) shows Lula with 47 percent of the vote intention against 32 percent for Bolsonaro.

In response, Bolsonaro and his supporters have gone berserk. Marcelo Arruda, a PT local leader, was murdered—shot three times—by a Bolsonaro supporter during his 50th birthday party on 10 July. A PT election rally in Rio de Janeiro was also interrupted by the explosion of homemade bomb. Since then, Lula wears a bulletproof vest.

Bolsonaro has issued more than a dozen decrees in favour of Brazilians’ right to bear arms, leading to a boom in gun ownership. He has said that Brazil’s electronic voting system is not reliable and has threatened not to recognise the results or cede power if he loses, hinting at a Brazilian storming-of-the-Capitol-a-la-Trump. One can only imagine what he will get up to if Lula does not win in the first round.

The stakes are high: Bolsonaro represents a grave threat to Brazil’s already battered and bruised democracy. Prominent figures in politics, business, science, and the arts have issued a Citizens’ Manifesto to defend the rule of law and oppose his ‘authoritarian delirium’, which has been signed by more than a million and endorsed by over 500 civil society bodies. Private associations like Brazilian Federation of Banks and the main trade union federations have issued a similar declaration. In Britain, parliamentarians have signed a special motion denouncing Bolsonaro’s election threats and the political violence.

In the face of this situation, we must support Brazilians’ struggle to defend their democracy, which has already been damaged by Dilma’s impeachment, by Lula’s imprisonment, and by the curtailing of social, economic, and political rights. We must redouble our solidarity, and condemn and oppose Bolsonaro’s assault.